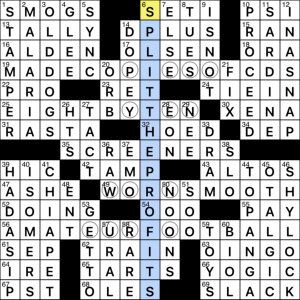 Hello lovelies! This week Matt is trying to slash some cash. Let’s see what is going on here: 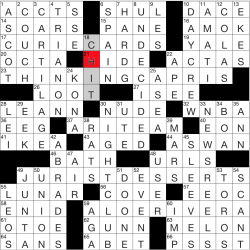 Hello everybody! Here is hoping that you’re doing well to begin another week!

In a way, this is a pretty timely because, in less than three weeks, Rihanna will be performing at halftime of Super Bowl LVII in Arizona. Given that, Ri Ri can be seen in today’s puzzle, as in each of the theme entries are turned into puns when adding the letters “RI” inside them.

Best part of the grid, for me, would be the four nine-letter downs, and all of them pack a punch and would leave no one UNDECIDED as to whether these entries are awesome or not (8D: [On the fence, voting-wise]). There’s some serious rumbling going on the trades and transactions front in the WNBA at the moment, with 2021 WNBA MVP Jonquel Jones being traded from the Connecticut Sun to the New York Liberty today, with rumors — and a cryptic tweet — possibly pointing at another one-time MVP of the league, Breanna Stewart, also being on the move soon (32A: [Chicago Sky’s org.]). The only entry that was completely new to me was DACE, in large part because I’ve only gone fishing once in my entire life and I’m far from well-versed in my knowledge of lesser-known types of scaly swimmers (10A: [Small, freshwater fish]). Maybe before the year is over, I’ll link up with friends and go on a fishing trip. If any of you have plans on that coming up and need an extra pair of hands for any reason, I volunteer to join!

“Sports will make you smarter” moment of the day: YALE (19A: [Harvard rival]) – Would you believe that one of the standout performers still going on in the National Football League postseason right now is a Yalie? Jacksonville Jaguars middle linebacker Foyesade Oluokun, along with being a fellow Nigerian, has led the NFL in combined tackles in each of the last two seasons, including a RI-diculous 192 tackles last season. (Oluokun finished with 184 combined tackles this season.) Oluokun spent his first four seasons with the Atlanta Falcons after being drafted in the sixth round of the 2018 NFL Draft. If you want to look for him when the Jaguars play the Kansas City Chiefs this Saturday in the divisional round, Foye is #23 on defense.

Theme answers are familiar phrases whose first words are homophones of the letters in QUICK. The revealer is “IT’LL BE QUICK” (60a, [*”I only need a minute,” or a guarantee about this puzzle’s theme]). 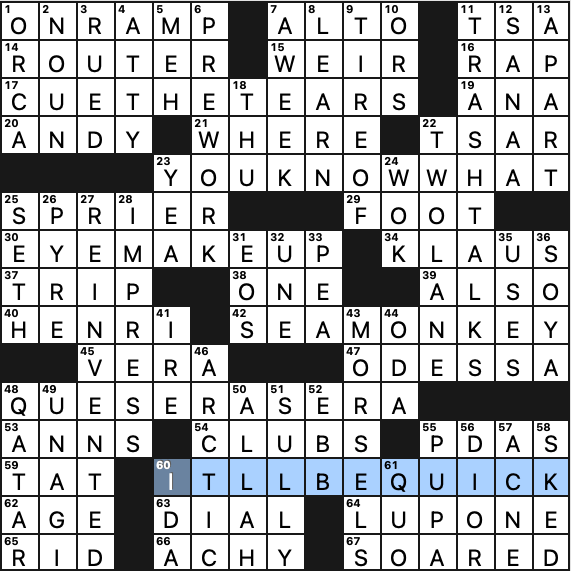 Fun theme answers. But I’d really like the theme better if the revealer had some indicator that spelling was involved. Say, for example, if your revealer was SPELL CHECK and then the first words were homophones of the letters in CHECK. (Good luck with that H, though.) You see what I’m saying? IT’LL BE QUICK doesn’t indicate anything about spelling which is a key feature of the theme. (It wouldn’t be a bad revealer, however, for a theme with words that were synonyms of “quick.”)

TRASH TALKS is a fun bit of long fill and REINVENTED ain’t half bad, either. I’m not so sure about PRE-WORK [Reading before the semester starts], though. Isn’t that still just “work”? ODA [___ Mae (Whoopi’s “Ghost” role)] is an entry that needs to be excised from constructors’ word lists as well. 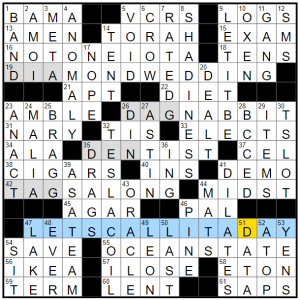 We’ve got a multilingual theme, though you could well solve the entire puzzle without knowing any of the foreign words that are shaded/circled within the long entries. Revealer is 47a. [“I think we’re done here” … or a hint to translating each of the four shaded words in this puzzle], “LET’S CALL IT A DAY.” DIAMOND WEDDING‘s clue has a bracketed Spanish in it, as shaded DIA is Spanish for “day.” DAGNABBIT double-dips with Dutch and Swedish sharing DAG. The Czechs get DEN in DENTIST. And the Germans have TAG in TAGS ALONG. Interesting theme idea, and even a bit educational. I like that it’s all 3-letter D words, nothing like JOURNALISM hiding French jour.

TESLA COIL is terrific fill! AGAR, not wildly idiomatic I LOSE, ETON, A MOI, and T-SLOT all feel on the hard side for Tuesday newbies.

27a. [Singer/activist Billy], BRAGG. He’s markedly better known in Britain than in the US. You may ask yourself, why not Fort BRAGG here? Well, that Bragg was a Confederate general, and I think the military base is to be renamed Fort Liberty. Liberty is not a traitor, so there you have it. 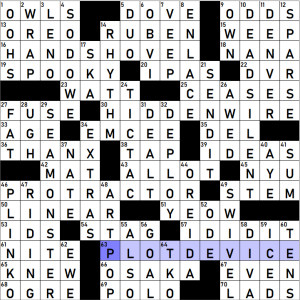 {Excuse me while I rewrite this after fully grokking the theme! My apologies to the constructor!} Today’s puzzle features three items that can each be considered a PLOT DEVICE, per the reveal at 63A [Red herring or love triangle … or 16-, 30- or 46-Across?]. Let’s take a closer look:

On top of this light and fun theme, Taylor managed to work up a super clean grid with playful long entries: DEAD SILENT and SEA MONSTER, and a lot of refreshing mid-length stuff: OBVI, THANX, TIC TAC, PLINKO, ART POP, SEND IT. Plenty of fun clues in this one, too:

Thanks for the fun puzzle, Taylor! {And again, sorry for my prior misinterpretation of the theme!}

I was Natick’ed on a Tuesday puzzle and I’m not sure how I feel about that. I’ll explain later. First the theme, which I very much enjoyed.

All the theme answers are in the Downs and they’re marked with stars. 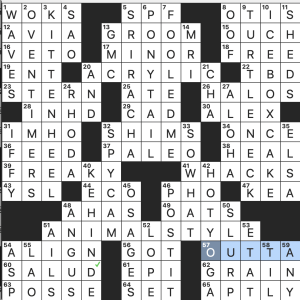 These answers have something obvious in common and if that were the whole deal it would have been a perfectly fine Tuesday theme. The revealer is what makes it art. 51a [Option on In-N-Out Burger’s not-so-secret menu, or the fashion sense that includes the answers to the starred clues?] is ANIMAL STYLE. That made me laugh.

I was Natick’d on the intersection of 40d and 60a. [“President Barack Obama” portraitist ___ Wiley] is KEHINDE and [Spanish toast] is SALUD. I spelled them KEHINTE and SALUT. One the one hand, crossing a proper name with a non-English word on a Tuesday seems a little tough. On the other hand, Wiley’s portrait has been widely reproduced and discussed and I knew the name, and Spanish is commonly used in the US.  This feels more like a gap in my own knowledge and a reminder of the limitations of my White perspective than a fault in the puzzle itself, and it definitely didn’t ruin the solving experience for me.

What I didn’t know before I did this puzzle: see above. 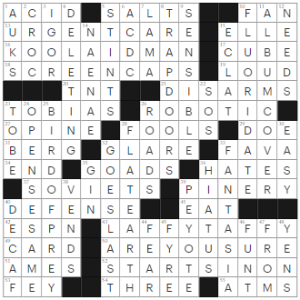 It’s a well-integrated grid with some interesting entries and clues. Let’s get right to it. (52a [Begins to tackle] STARTS IN ON.