Theme: Certain beverages are clued via anagrams which are also familiar(ish) phrases. 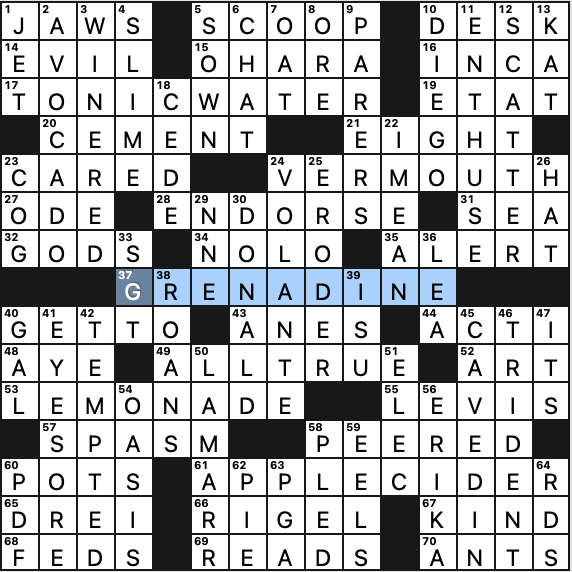 My first thought was that these would all be alcoholic drinks but only one of them is. Then, per the title, I expected them all to be ingredients one would mix into an alcoholic drink. In my experience APPLE CIDER isn’t usually used as a mixer, but a quick search on the internet proved me wrong. I’m still a little bothered by the inconsistency in that one of the drinks is alcoholic, two of the mixers aren’t usually drunk straight, and the other two are very commonly drunk straight. But it is certainly true that each of these can be used as an ingredient in a mixed drink.

In the fill, the corner 7-stacks are quite nice, especially with AVOCADO, WINE RED, CAVED IN, TRIDENT, and EYESORE. I’m less ENTHUSEd about ANES and ERODER in the center, but ALL TRUE is fun (though it’d be more fun clued colloquially than with [Factual in every detail]). 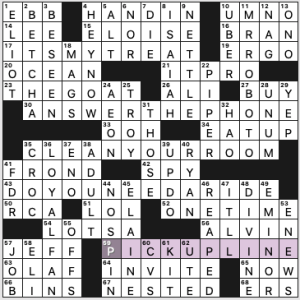 An added note of elegance is that two are offers to pick up, while the other two are commands/pleas for someone else to pick up.

Fave fill: THE GOAT (the greatest of all time), “HEY, NOW!” (who watched The Larry Sanders Show with “Hey Now” Hank Kingsley?), and 1980s throwback “MR. ROBOTO” (if you were not listening to top 40 in the ’80s, it may astonish you to learn this was a big hit).

14a. [Gymnast Suni of Team U.S.A.], LEE. Did you know she’s been competing for Auburn University? YEP, she can get a perfect 10 on the beam. There are more recent videos with her feats on other equipment. Splendid to watch her mastery. Simone Biles is widely hailed as the GOAT of USA gymnastics, but don’t sleep on Suni Lee. 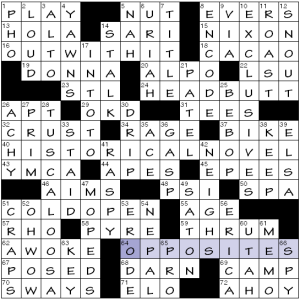 It’s an interesting theme concept here, and a tricky one to realize. I feel it was executed as well as possible, considering the task. I like it.

Good morning, friends! This is the type of layout that I see and immediately want to fill myself. I haven’t really seen anything like it, and it’s so pretty. I guess the down-side is there aren’t many long answers, just the three 11s going down the middle, and the two 12s intersecting them. 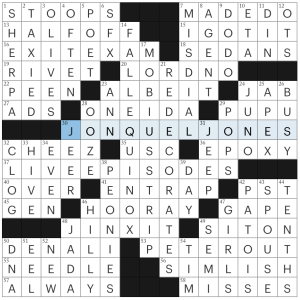 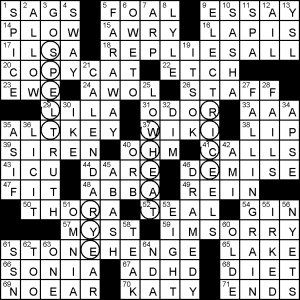 Jason Reich & Katie Hale give us a common enough vertical variation of the spelt-out words theme. The theme is explained at [Downpour, or when parsed another way, what can be found in this puzzle’s sets of circles], FALLING/RAIN, or “FALLIN’ GRAIN”. The grains are SPELT, RYE, WHEAT and RICE eschewing “corn” and “oats”.

Fast five before we have no power again:

What a delectable puzzle! 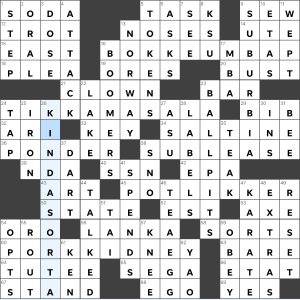 Theme: each themer is a food that contains —KK— (or two Ks)

For today’s themer set, the first two were known to me and easy to fill but the last two were new to me. Lots of tasty food is on the menu and everything will max out the standard recommended calorie in-take but we’ll overindulge and enjoy them all right now. BOKKEUMBAP is a basic Korean rice dish although I usually make mine with kimchi and bacon-flavored Spam (which oddly has less sodium than most flavors). TIKKAMASALA is an Indian curry that is spicy creamy tomato sauce and well-loved for a reason. As a Midwesterner, the Southern POTLIKKER is a broth that I do not know about but The Atlantic has a good article all about it and its history. Having not read “Ulysses” yet, the cluing for PORKKIDNEY didn’t help me today but hopefully it was familiar to most solvers. I’m always glad to see a set of four, as it makes that theme that much more enjoyable and impressive to fit them all in!

Stumpers: POTLIKKER (new to me), PORKKIDNEY (new to me), and BUST (I kept thinking about the sound so needed crossings)

The asymmetrical grid felt really smooth and didn’t even notice it until after the solve. Being newer to crossword solving, I like all grid designs as long as it doesn’t feel choppy or clunky; even some symmetrical grids can be disjointed, depending on their flow and spacing. In addition, I really enjoyed all the fun bonus fill! Hoping we see more soon from Rafael!