Each theme entry is a title of a work that spells out (with circled letters) the category in which that work belongs. 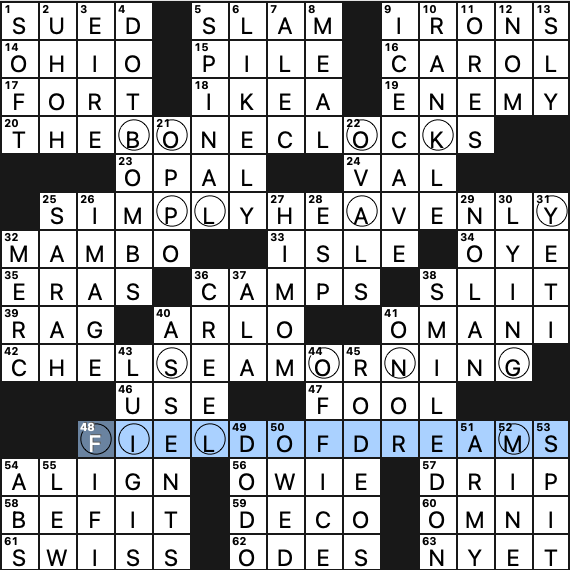 Nice. Things clicked sometime while piecing together the first two entries, so that aided me in filling out the bottom half. Sadly for me, I only know one of these titles (the film), but I still think it’s a nifty theme. And what an odd coincidence that we have two Mitchells and two Davids among the creators here. There can’t be that many titles that are potential theme entries here.

Never heard of DOT BOMBS [Failed internet companies, facetiously], but it was inferable and an interesting entry. I also liked ICE CAVE and LUIGI’S Mansion. I didn’t remember OPPO [Campaign research, informally], but I feel like I’ve seen it in a puzzle before. 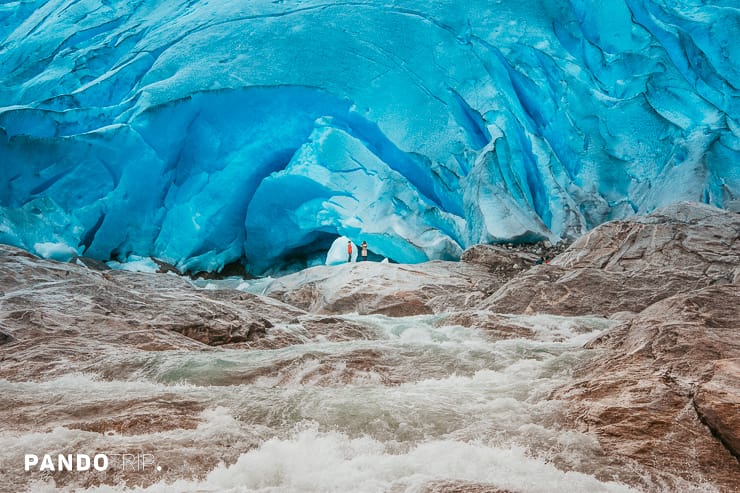 Solid theme (even though I only knew one of the entries). 3.75 stars.

This is a quick one since I have to finish packing before the alarm goes off at 4:15 AM tomorrow. It’s a themeless, it wasn’t particularly hard, and it was pretty interesting. 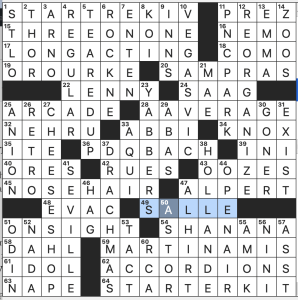 What I didn’t know before I did this puzzle: that the Mona Lisa is housed in the SALLE des États. 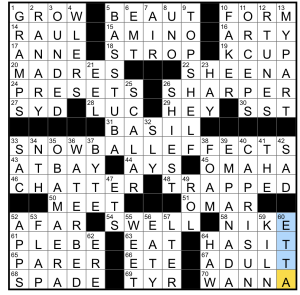 Oh baby, are people going to have trouble with this or what.  For so many different reasons — chief among those is that the puzzle almost works as the completely incorrect but almost completely plausible solution pictured to the right.  That is to say, all the entries from 1-4D start at 1A, and GROW from there, making a 90 degree turn downward to fill each column.  Ditto for 10-13D, FORMing from 10A and making a similar 90 degree turn.  It falls apart at the very end of the last set, though; 55-57D SWELL from 54A just the same as the other two groups of themers, and then you’re stuck with ROL.  This last final outlier is where I realized that you need to rebus each incremental letter for 1A, 10A, and 54A, so that the actual rows look like gibberish: GGRGROGROW, FFOFORFORM, and SSWSWESWELL.  Also, for what it’s worth, the plural phrase SNOWBALL EFFECTS yields just 50k hits on the Goog.  You can’t say this wasn’t a proper tricky Thursday though!

Cracking: WATER BED — these were always depicted as aphrodisiacs in 80s and 90s sitcoms.  It was a simpler time.

Slacking: TYR — quick, name a God of War — no, not MARS; no, not ARES; you know, that obscure Norse one that’s sort of like THOR, except with the name all butchered and it also feels like some modern abbreviation like Take Your Receipts or Thats Yolo Ratchety or some other gobbledygook.

Theme: Each theme answer can be split in the middle to form an anagram to its first half 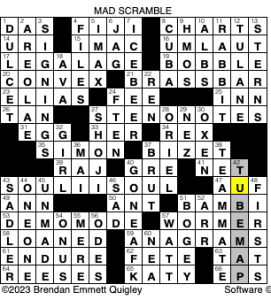 Revealer: 59a [“What halves of each starred clues are to each other”] ANAGRAMS

It’s impressive how many themers there are in this puzzle, with seven plus the revealer. The straightforward cluing on each made them pretty clear, and LEGAL AGE was a nice way to kick it off. I can’t say I used the theme much to help me fill the puzzle, but it would have certainly been useful in BRASS BAR, but I’d already gotten most of that on the crosses before I filled in the revealer.

I like like this grid design, with its feeling of multiple stairways going up and down. Talk about getting scrambled! It’s like that M.C. Escher painting. I felt called out by 49a [“Woman’s middle name, often”] ANN since my middle name is, indeed, ANN. I also really loved 16a [“Sarcastic diacritical added to beef up the ‘metalness’”] UMLAUT. Additionally, 11d [“Year of the ___ (2023)”] RABBIT is super appropriate, though it’s still weird to realize that it’s 2023.

In a few places I was tripped up, most particularly by the crossing of 29d [“Partle du visage”] NEZ and 37a [“‘Carmen’ composer”] BIZET. It did not help that I initially had VERDI there. I had no idea initially for 23a [“Inventor Howe”] ELIAS, but it became very clear as I filled in AREOLAE, SIGNINGS, and FILES. 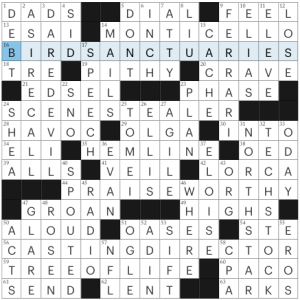 My solving time tells me this puzzle’s pitched right over the “for beginners” plate, but newbies may well hit some little speedbumps of crosswordese.

Three clues that caught my eye:

Did not know: 60a. [Flamenco guitarist ___ de Lucía], PACO. Here’s a 30-year-old video of a PACO performance. Also had not heard of 48d. [Pianist and music scholar Charles who wrote “The Classical Style”], ROSEN.

Speedbumps for newbies: French ELEVE, old EDSEL, AD IN if you don’t follow tennis, ATTY (feel like I don’t see that abbreviation much in the real world).

Theme: The first word of each theme answer is something that can be either hot or cold, that people often have very strong opinions about. 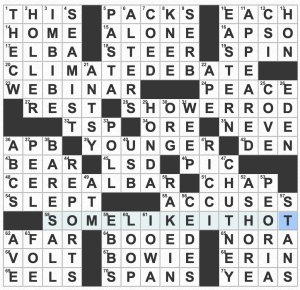 I watched “Some Like It Hot” with my grandparents as a kid and I remember seeing the Broadway cast perform this year at the Macy’s Thanksgiving Parade, but I still needed 50% of the crosses to see the revealer of this puzzle. (Side note: Does anyone know if the musical any good? Does the “men dressing up like women!” humor hold up in 2022?)

Anyways, the theme is a little broad in that there are many, many things that some people prefer hot, but at least all of these are things that I know people have *very* strong feelings about. CEREAL BAR is a great answer, but SHOWER ROD didn’t do much for me. I was worried when I first got the revealer that saying SOME LIKE IT HOT about the CLIMATE DEBATE was giving credence to global warming deniers… But it’s actually just about people who prefer warm climates in general, thank goodness.

Other highlights: BARES ALL, HOME/ALONE split across two answers next to each other. 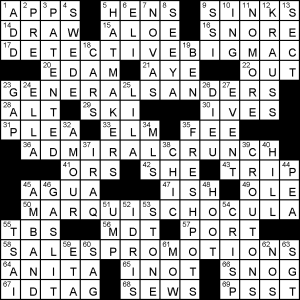 Today’s puzzle is extremely clever and well executed. I struggled mightily with it, as 3/4 of the characters don’t exist here, and the twist made the answers even more opaque. Katherin Baicker & Ross Trudeau’s theme is SALESPROMOTIONS. Four advertising characters with titles, all male, get their title upgraded by one:

My error was pSAI/pBS. I didn’t know TBS, and although HSAI seemed most likely, PBS was, I was sure, a channel, but HBS wasn’t. I also struggled at SSI/SINKS, the [Features of some islands] clue was rather subtle and had me, literally, at sea. I was also only semi-sure of [Dutch banking giant with an orange lion logo], ING being correct, having AIG running interference.

Tough theme for me today—how quickly did you all get it? 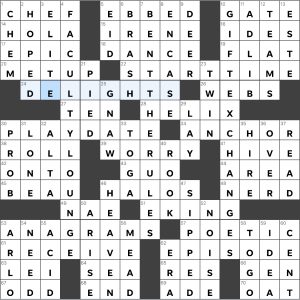 Theme: the first word in each down themer is a synonym for “talent”

Had K-12 on the mind so kept thinking about a “shared work room” for FACULTYLOUNGE. BENTTHERULES is usually harmless, and seems to be the case here with its cluing. Usually GIFTEXCHANGES happen around the holidays and the ones with the most risk/reward in my experience are white elephant ones. I certainly learned a lot from the theme—as I haven’t heard the first two used in that way. h/t to Sally and her blog post for explaining today’s theme to me—be sure to read her write-up too, as it contains excellent trivia about many of the entries and today she also discusses the grid’s symmetry in particular at the end.

Stumpers: READ (convinced it was “leaf”), CHEF (end to me), and ANAGRAMS (misdirected by the clue and was thinking about commanitilies—loved it once filled though!)

Overall a fun puzzle, though I kept having to go back over certain areas to slowly fill it all in. No areas were too tricky, as there were fair crossings throughout and it was a fairly smooth solve, just a bit pokey for me today, or at least it felt like it.