I was surprised that my time was under five minutes. It felt longer – and more challenging than a typical Wednesday.

Each theme answer is “expanded” when the first part of the answer is read as an abbreviation and the full word is inserted instead. That doesn’t make much sense, does it? Let’s look at the answers instead. 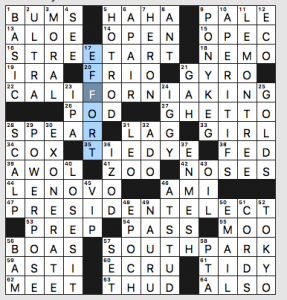 This was not immediately obvious for me – the light dawned with CALIFORNIA KING. The fill also made the puzzle less Wednesday-ish than I expected.

What I didn’t know before I did this puzzle: that NAURU is the world’s third-smallest country, after Vatican City and Monaco.

Our theme features phrases whose first word can be treated as a well-known magazine title. I’m sure this theme has been done before, but in a more modern twist, each one is clued with respect to the online versions of these mags. 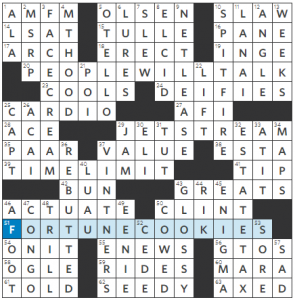 Despite some of my quibbles above, I like the theme. I wish more online-centric entries could have been found, but maybe there aren’t any. I found LIFE HISTORY [Browsing path through an online general interest magazine?], but of course LIFE is defunct and probably never had an online presence.

The rest of the grid is great. I’m not so sure about NET LEASE, but FACE CREAM, SPITFIRE, VINTNERS, and ESTATE TAX (with its [Passing levy] clue) are all fun. Also good: DEIFIES, CARDIO, and ENIGMA.

But on the whole, the fun long fill and fresh cluing more than made up for gunk. Some clues that caught my eye: 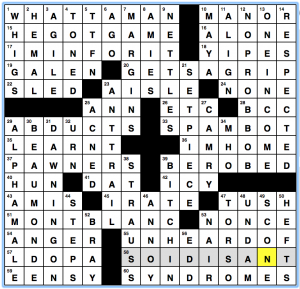 Between this week’s New Yorker puzzle and today’s AVCX, it’s been a very good week for themelesses.  Like that one, KAC’s latest themeless for AVCX wasn’t quite as chewy/tricky as I’d have liked, but there was a solid selection of fill throughout: 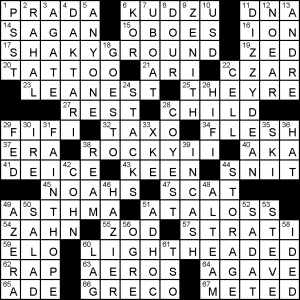 The theme is interesting enough: LIGHTHEADED means that four other answers begin with synonyms for light as in weak – >SHAKY<GROUND, >DIZZY<DEAN, >FAINT<HOPE, and >ROCKY<II.

The puzzle uses rare letters especially poorly. The first instance I encountered is the exception to this rule. KUDZU and ZENITH are both interesting words, and the collateral damage of KOR, USD and ARI is not too bad. After that though – TAXO/XKE is pretty terrible. I’m not sure TAXO can be called a prefix when it occurs in just one set of related words. It’s really pretty bottom-of-the-barrel stuff. HAZIER/ZOD wouldn’t have been too bad – ZOD is a Superman villain; except it’s clued as an abbreviation for Zodiac, which is hardly something people regularly abbreviate. AZERA/ZAHN is a nastily uninferrable cross; a K (as in AKIRA Kurosawa) or a C (as in the ACURA) will end up in a number of people’s grids.

Add to this, with ALTEAM making, from what I can see, its ignominious newspaper crossword debut (NLTEAM is still unused – don’t everyone rush and put it in their wordlists), and I would have probably, as an editor, only used this puzzle with a completely reworked grid (possibly with ROCKYII ditched if it was really creating that much strain on the rest of the puzzle.)