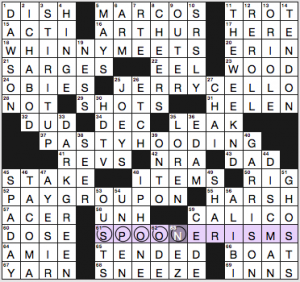 Oh! I had to take a minute after finishing the puzzle to reread the revealer clue and see what the circled letters had to do with anything. The clever Erik/Andy duo found four foods you’d eat with a spoon, spoonerized their names, and clued the resulting phrases accordingly.

4.3 stars from me. That “aha” moment when I realized the spoonerized phrases were all spoonable was golden!

I had no idea what Peter was getting at until I filled in the revealers, and even then didn’t understand how it connected to the title. That part just dawned on me now, hours after I solved it.

The theme entries all have something in common:

Two people, two things, one drink…huh? Peter helps us out at 30a [With 50-Across, theme of this puzzle]. The two together are EUROPEAN DEMONYMS. (A demonym is the word for people who live in a specific place.) So we have DANES, LETTS (from Latvia), POLES  and FINNS. That’s pretty good all on its own – and the title tells us that all the countries in question border the Baltic Sea, which takes it from “pretty good” to “brilliant.”

What I didn’t know before I did this puzzle: that AMELIE‘s last name is Poulain.

I leave you with Vicki Carr, which may remind some of you of your youth and others of Moonstruck.

Nice to see Jeff’s byline here every once in a while. Today he’s found phrases that feature the trigram OPS but clues them as if the trigrams weren’t there. 60a tells us these trigrams are COVERT OPS [Clandestine activity, and a hint to answering the starred clues]. Get it? Sure you do. 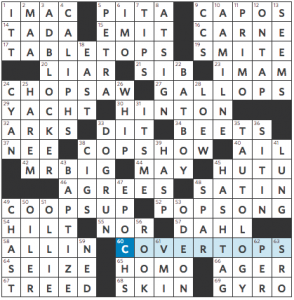 Fun wordplay. I wonder if Jeff considered using BLACK OPS and placing the OPS “inside” specific black squares. That would be a much trickier puzzle (to make and to solve). Has that been done? It feels familiar.

Jeff always knows how to bring the fun fill. AD BLOCKER gets a clever clue [Spot remover, of a sort]. I tend to forget what TAUTOLOGY means, but the clue helps us out [“Short summary” or “free gift,” e.g.]. Ah yes, it’s saying the same thing twice with various different words. (“Various different” is one of my neighbor’s particular pet peeves.) 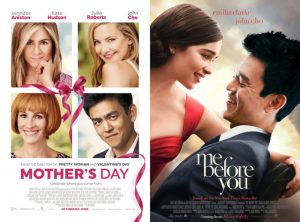 Also good: HASHTAG. Why [#StarringJohnCho, e.g.], I wonder. Ah! It’s a movement to encourage diversity in American cinema. It imagines what a Hollywood film would look like with an Asian-American actor (specifically John Cho). Nice!

Also also good: A. A. MILNE, BAPTIZE, BATBOY, and DOG RUN. Not sure how I feel about CALIPHS in the grid; on the one hand it brings ISIS to mind, on the other, it’s a historical title. 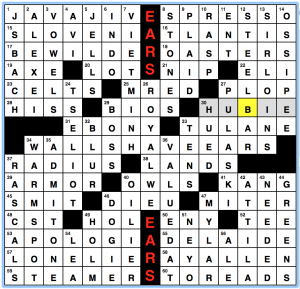 This week’s BEQ theme is a little interesting – 34A points out that The WALLS HAVE EARS, and indeed, the two walls at the top and bottom of the puzzle need to have EARS placed in them for their fill to make sense.  Take a look at the screenshot for the full list of affected entries, but here’s a few examples:

Etc, Etc, at both the top and bottom of the grid.  If I’m honest, this was just okay as a theme.

I have had this Diet Coke jingle stuck in my head for ~2 years. *shakes fist at the Manhattan Transfer* 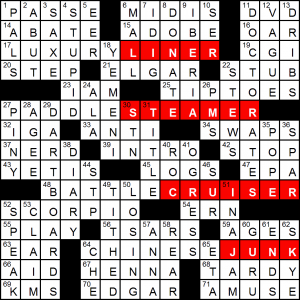 I really enjoyed today’s tight little theme. We get four two-part watercraft. The craft in question all have homonyms, and the clues are written to wackily reinterpret the phrases as pertaining to said non-nautical homonyms. I can’t imagine a PADDLESTEAMER has an easy job; I’m pretty sure the rubber will melt and make a big mess.

We also get some slicker than average clues. My favourites were [They’re stuck in pubs] for DARTBOARDS and [Gave religiously] for TITHED.

Gluey entries were present, if only in DRIBS. I wouldn’t cry to not see SER again, but when its one answer in a stack, it grates less.