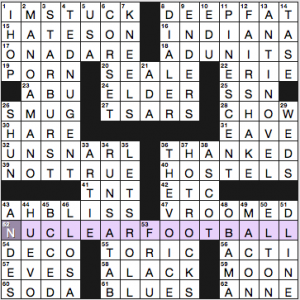 I don’t get it. NUCLEAR FOOTBALL is the only 15, and the grid, with left/right symmetry, has what sort of looks like a football goalpost made out of black squares. But the NUCLEAR FOOTBALL doesn’t get thrown through goalposts. There are a couple football-related clues (KNEELS clued as a noun, ugh, and D-LINE) but I wouldn’t call that a mini-theme. Also lousy timing for a puzzle that evokes the NFL.

There are a few entries that irked me. “I’M STUCK” feels a bit contrived, AD UNITS is dully unfamiliar, and “AH, BLISS” is not all that common a remark.

I do like the contemporary “HATES ON” (as in “Amy was really hating on AD UNITS”), VROOMED, a fireworks (or candy) STARBURST, “LET’S ROLL,” THE VOICE, classic HOT ROCKS (absolutely part of my collegiate listening), abhorrent PINE SCENT, a FAIR SHAKE, and the literariness of an ANTINOVEL (I took a college class on plays and antiplays—Ionesco’s Rhinoceros was among our readings). 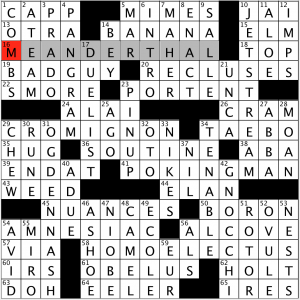 Before I blog this, let’s establish that anatomically modern humans emerged from primate ancestors through the process of evolution by natural selection, ok? If you’re a creationist, this puzzle may not make sense to you. For our theme, four ancestors of modern humans get an update, like so: 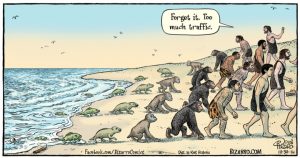 Fill that didn’t let me forget that this puzzle was published in the Chronicle of Higher Education: 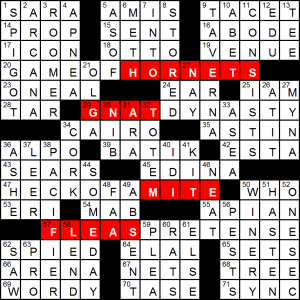 I feel somewhat ambivalent about today’s theme. I like the basic concept here: take one word in a phrase and anagram it to create a new, wacky phrase. I especially enjoyed the opening entry, which was probably the seed – GAMEOFHORNETS (THRONES). It is perhaps not the best design to use up your best theme answer first though. On the down side, after hornets we have GNAT (TANG), MITE (TIME) and FLEAS (FALSE). Three insects, one arachnid, though all are arthropods. Not good to have three answers with a closer commonality and a fourth outlier. I also feel the revealer was a let down, and possibly not necessary (although this is a more convoluted theme than we often see in the LA Times, so possibly it is). PESTS is vague, and I’m not sure HORNETS are pests in the same (agricultural) sense as the other three.