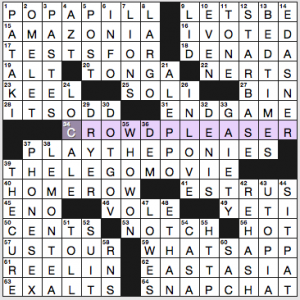 Lots of groovy stuff in this puzzle: ENDGAME, CROWD-PLEASER, PLAY THE PONIES (though it’s way less playful for the horses themselves), THE LEGO MOVIE, typing HOME ROW (old school!), WHATSAPP (the only person I know who uses it is South African, and my kid tells me that Mexicans in the US use the app to chat with folks in Mexico), Orwellian EASTASIA, SNAPCHAT, THE CURE (video below!), PHONE SEX (is that still a thing? talking on the phone, ugh), and BEDTIMES. Oh, and “I VOTED“! Timely, right on the heels of Friday’s Ireland referendum.

First up, this is bull: 1a. [Easy way to ease pain], POP A PILL. Apparently nobody involved in signing off on this clue knows anyone with chronic pain, because NO.

If you’re like me, upon seeing the title of this puzzle, you thought you’d see river names crossing through our main theme answers. Well, you were half right. The river names are there, but they are contained inside each themer. So maybe through is not the best preposition, maybe it’s more like within.

Further, each river is listed separately as its own entry with the clue [River that runs through XX-Across]. I found this to be curious, because there’s not really a need for it. If you were to use circles or shading to highlight each river in the theme answers, you would eliminate the need for these eight extra theme answers and allow more breathing room in the grid. But now that I think on it, I can’t recall ever seeing circles or shading in a WSJ puzzle. Maybe the Journal lacks the technical capability to add circles (seems unlikely), or maybe editor Mike Shenk just doesn’t like using them.

Regardless, our theme entries and rivers are as follows: 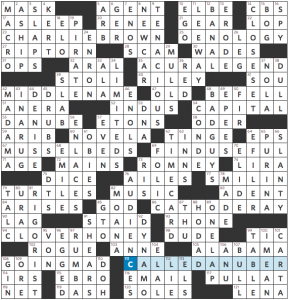 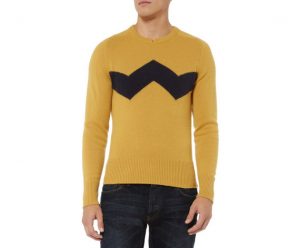 Good grief! This terrible CHARLIE BROWN sweater is only $995.

Despite every crosswordese river known to puzzledom being in this grid (plus a few extra but minus the Ouse), the last two entries won me over. Plus, you know, CHARLIE BROWN. You can’t not like CHARLIE BROWN.

Still, all the themers and the rivers constrained the fill so that we end up with things like EPS (clued as an abbreviation for “episode”), KERT, ARB, RIS, ANU, ENOLS and partials AN ERA, A RIB, A DENT, A SHIP, and IN A RUG.

The puzzle has plenty of good points, but solvers may be turned off by the many crosswordese river names and the higher-than-usual unpleasant fill. 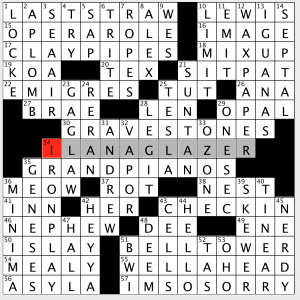 I think this is the first puzzle by Kyle that I have blogged. I had a chance to spend some time with him in 2017 on the way back from the ACPT since we flew on the same flight! He is in the Chicago area, and I usually fly out of Chi-town since it is half the price of flying out of South Bend. Extremely sharp fellow is my lasting impression, and congrats are in order as he is recently engaged! I don’t remember seeing his byline too often, but xwordinfo.com says he has had 6 in the NYT, and he says this is his 11th total published puzzle. This one played a LOT harder than normal LAT Saturday puzzles, at least to me. I still wouldn’t say overall there is a lot of difficulty in here, but what IS hard is VERY hard. I will try to highlight at least a couple of my head-scratchers in the comments below. Overall, though, a fun challenge. 4.5 stars today.

Some of those head-scratchers:

I could go on, but it’s a holiday weekend! Have a great long weekend! 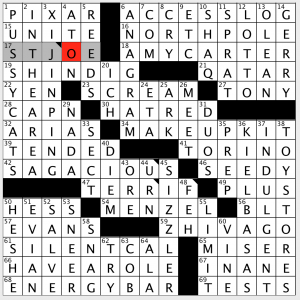 Not too bad for a Stumper. I think Stan does lighten up a bit on holiday weekends! I spoke last week about hopefully breaking 10 minutes on one of these Stumpers, and I have no idea how that is going to happen. Maybe I will buy those noise-canceling headphones I keep speaking about! In the recent Real Sports clip about the crosswords, Will speaks about the focus needed to solve. There is a high level of such focus to solve one of these, and that is where the headphones come in: you gain another level of quiet. Or I could just go to the library!

Only minor errors in the grid today, and they are lazy errors. Still impressed with Stan’s (“Anna’s”) ability to make grids this good with seeming ease. 4.4 stars.

Enjoy your holiday, everyone!