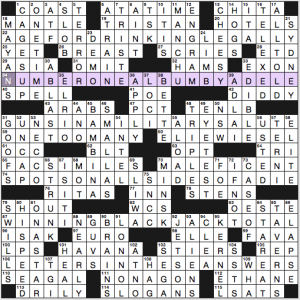 The theme is “21,” and all six 21-letter theme entries are clued [21]. AGE FOR DRINKING LEGALLY (of course, LEGAL DRINKING AGE is way better, but it’s only got 16 letters), NUMBER ONE ALBUM BY ADELE (not her first album—that was 19—but her first #1 in the US), GUNS IN A MILITARY SALUTE, SPOTS ON ALL SIDES OF A DIE (I prefer PIPS but that would make it a 20), WINNING BLACKJACK TOTAL, and LETTERS IN THESE ANSWERS. I liked this a lot better than most themes in which the clues and answers are basically swapped.

There were a few grievous bits of crosswordese and cruft that barked at me. TEN LB, OCC, STENS, HI-SPEED (my eyes read that as “his peed”), EL RIO clued as an unincorporated community in California, SMALL A’S (whaaat? no!), SSTS, AT. NO., and the stunningly uncommon-in-crosswords TERNI, 57d. [Italian city where St. Valentine was born]. 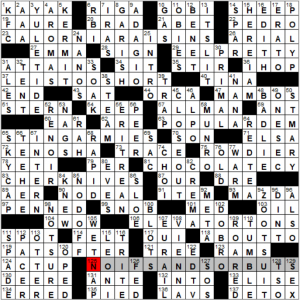 We’ve got some conjunction expunction from common phrases this week: 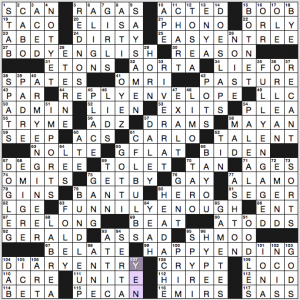 I didn’t find the theme too exciting. YEN is 107d. [Urge hidden in this puzzle’s eight longest answers], and each theme answer follows the —Y EN— format.

I prefer Sunday themes that feel a bit playful, and “these letters are in the middle of those phrases” doesn’t fit that mold.

Favorite fill: “BUNDLE UP!”, DOES LAPS, BOTNET, and the implausible consonant run of CFL BULBS. 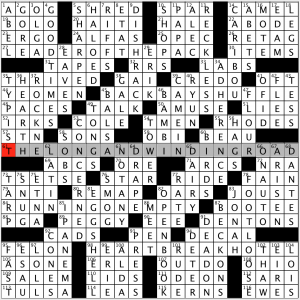 This puzzle’s theme makes more sense if you remember that the CRooked is the Boston Globe‘s Sunday puzzle, published five weeks later. Five weeks ago was the Boston Marathon; as everyone knows, NATICK is a town at the eighth mile of the course. Cox & Rathvon imagine songs to run by:

The song I hadn’t heard of in this list is BACK BAY SHUFFLE, which is a swingin’ Artie Shaw tune to which you could dance a swell foxtrot. According to a noted jazz blog, the song is “a little tone poem describing the scramble of musicians after a late Boston gig to catch the last train back to New York, lest they be stranded over night.” You can catch a train to New York at Back Bay Station; Back Bay is also the neighborhood where the Boston Marathon ends. The 2013 Marathon bombing at the finish line killed three people and injured hundreds. This year was the fifth anniversary of the bombing; if you’re interested, check out Our Marathon, a “digital memorial” and oral history site created by librarians, archivists, and students from Northeastern University.