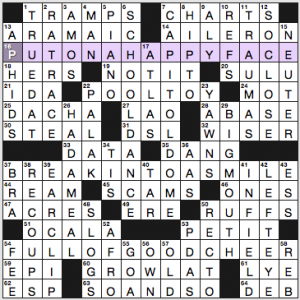 The theme is borne out by the grid design, which, if you squint just right, shows a creepy clown smile. (Or a creepy jack-o’-lantern smile. Or a vapid smiley-face.) “PUT ON A HAPPY FACE” is clued as 16a. [“Bye Bye Birdie” song]. 37a. [What you might do if you sing 16-Across] is BREAK INTO A SMILE. And FULL OF GOOD CHEER is 54a. [How you might feel if you sing 16-Across]. It seemed a bit hard for a Monday puzzle to me—the second and third themers aren’t the only phrases that might work for those clues, right?

Also on the tough side for a Monday, we’ve got such fill as NOT IT, DACHA, LAO, DEB, EAR CLIP, the awkward HAD A MEAL, unfamiliar-to-those-who-don’t-eat-Indian-food PALAK ([___ paneer ([Indian dish made with spinach)]), dated PDAS, RECTO, ESS, and ALY ([Prince ___ Khan], markedly less familiar than gymnast Raisman). 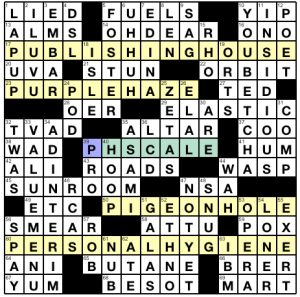 As a chemist, I was Pretty Happy with this cute Monday puzzle from this Presumably Hitched pair of constructors:

Four solidly in-the-language terms or phrases with a nice revealer and solid theme presence across a grid that’s quite clean (except for ATTU and EMBAR)?  Give me more puzzles like this Post Haste!  There is a slight deduction because the scale aspect of the revealer doesn’t quite translate here, though PURPLE HAZE would almost certainly be found in the acid region of such a scale! Also, how amazing would it be to include POTASSIUM HYDROXIDE (a ubiquitous and quite basic chemical) as a themer in the 21×21 version of this theme? 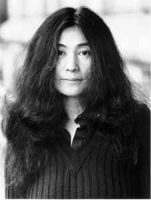 I was excited, as always, to see a female (co-)constructor, but there was sadly only woman included in the grid or clues: Yoko ONO. 44a (WASP) could have been clued with respect to the female superhero in a movie dropping this year and 64a (ANI) could have been clued with respect to any female with that name ever, but sadly neither were. We didn’t even get a female example for POET, but we did get a mascara SMEAR, so … there’s that? #includemorewomen #representationmatters 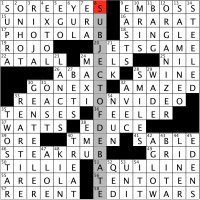 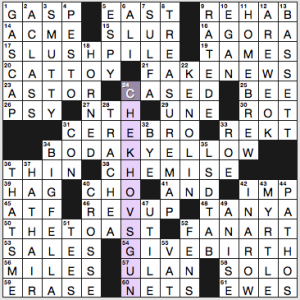 So with the holiday disruption, we didn’t realize that nobody had blogged Natan’s puzzle. I had solved it and tweeted my praise for it, but figured someone else was blogging it—and then certainly there was discussion in the comments. *bloop*

Did not know: 24d. [Dramatic principle similar to foreshadowing], CHEKHOV’S GUN. Pieced it together through the crossings, which were all plausible (CEREBRO) or things I knew. Also did not know 54a. [Emulate Marni Kotak, say, in her 2011 performance art piece], GIVE BIRTH.

Most contemporary fill: BODAK YELLOW, FAKE NEWS, REKT, gone-but-not-forgotten THE TOAST, FAN ART, HOME-BREW, EGAN clued via author Jennifer, who won a Pulitzer for her previous novel, A Visit from the Goon Squad.