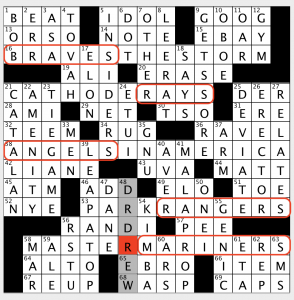 Happy Memorial Day weekend, everyone! My dad served in the Korean War; if he were alive today I wonder what he would think of what is going on there now? Hopefully cooler heads will prevail and more peaceful times are ahead. Anyway, I digress-we are looking for a sports statistic this week and we have five theme entries, all including the name of a baseball team:

So the obvious next step is to concatenate the first letters of all the teams’ locations; I wasn’t sure if I should use both the TB of Tampa Bay and the LA of Los Angeles, but neither approach seem to work well, as you get ATBLATS or ATLTS depending on which method you use. The former is very close to “at bats,” which is a sports (and appropriately, baseball) statistic, so I wondered if there was a way to get an A for the Angels that was consistent with the other entries.

I thought more about the title and wondered if perhaps the last names of the managers (“heads”) of the teams might be helpful, but after a few minutes researching them on the web, I couldn’t develop a pattern. I went back to the “atblats” again and tried to focus on how to get an “a” from LA and thought perhaps the “heads” in the title were actually the insignia on the caps the players wear. Here are the lids in order:

(I’m assuming that this “new era” version of the Rays’ cap wasn’t intended for this meta.) . So reading from left to right, AT BATS seems to be what Matt was aiming for after all. I liked how the meta was a bit more complicated than just recognizing the team names in the theme entries, especially with the use of that “TB” in a baseball-related term.

I’ll close with my favorite clue, [Hope you can laugh at] for BOB. Nice one!