An unusual grid for an unusual puzzle with a layered, complex theme. I spent some time looking it over after I solved it and then checked Wordplay to make sure I hadn’t missed anything.

There are five obvious theme answers and one that looks like a revealer. 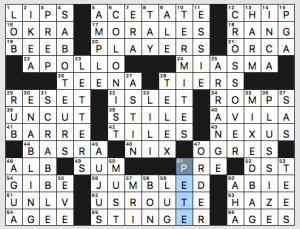 That’s the game board surrounded by the racks. It’s an actual Scrabble game in the grid. Wow.

The fill is very constrained by the amount of theme material and the shape of the grid. It didn’t detract from my enjoyment of the puzzle; I wonder if the same would be true for a younger solver. I know the saying “Loose LIPS sink ships,” I remember TEENA Marie, I’ve read about ABIE‘s Irish Rose, and I’ve actually seen a TELEX machine. And I’ve actually driven the entire Nevada stretch of US ROUTE 50, once dubbed “the loneliest road in America.”

What I didn’t know before I did this puzzle: that Oklahoma State’s mascot is Pistol PETE. 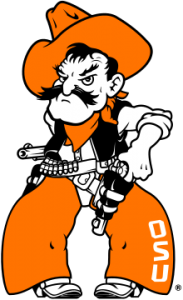 You know where this is going based on the title. Yup, phrases with NERD spanning multiple words. 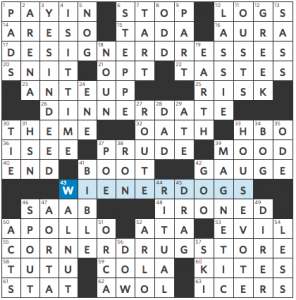 While the theme is familiar, Zhouqin executes it pretty much perfectly. The phrases are well-chosen and even include a couple of grid spanners. I was going to ding the grid for the use of three words in the final entry (where STORE might be considered extraneous), but then I realized DRUGSTORE is often (usually?) written as one word. So there’s not even that.

And for consistency’s sake, each themer breaks up NERD in exactly the same way. It’s always more elegant if each answer does things the same way or if they each do it differently. As an example of a hidden word theme, this is pretty much a poster child (poster puzzle?). 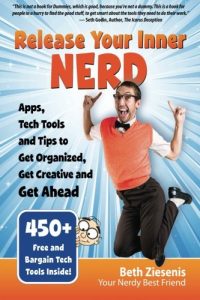 As usual, our constructor gives us plenty of fun fill to discover. I like the pairing in the northwest, even if the two entries are in the wrong order: “IS IT TIME?” “YES, INDEED“. In the southeast there’s a MAGNETIC HOUSE VOTE going on, whatever that might mean.

That’s about all I got. A straight-over-the-plate but smooth-as-silk puzzle. 3.5 stars. 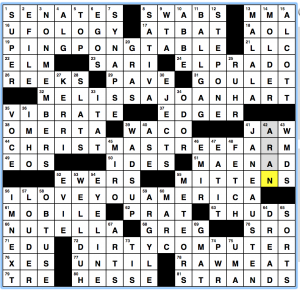 This week’s AVCX features a guest puzzle from Rebecca Falcon, who had her debut puzzle published by the AVCX a few weeks ago as a Friday bonus.  Let’s take a look at what’s going on with “Going Viral”:

Each of the theme answers starts with the name of a notable computer virus.  I love the timeliness of this theme (DIRTY COMPUTER came out last month and is a solid bop all the way through), but as a whole the grid’s lacking a little of the inventiveness/pizazz I associate with the AV Club’s puzzles.  With a few cluing changes, I’m pretty sure this could have run in the NYT without issue.

Solid construction, if lacking in some of the usual AVCX pizazz. 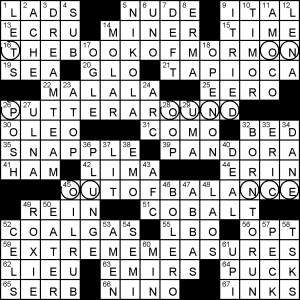 The theme is revealed at EXTREMEMEASURES, only the theme is actually more precise than that. I count that as a minor demerit – the revealer doesn’t relate to the fact that all the measures are weights, which seems off. On the plus side, it has the three major English weights, in order – TON, POUND, OUNCE. Less used weights, like grain and stone, are ignored, making things neater. POUND and OUNCE must have been tricky to find appropriate answers for, as PUTTERAROUND and OUTOFBALANCE are both pretty stolid as theme answers go. THEBOOKOFMORMON is an excellent 15, no matter how you feel about the contents.