I’m not a speed solver by any stretch of the imagination, so I don’t bother to time myself for most of my posts here. But since I’m filling in for Amy on the NYT puzzle, I figured I’d see what I can do. I must say I impressed myself (although I can’t say that’s very hard to do). Probably my time is mostly due to the smoothness of the fill and cluing in this impressive grid.

Zhouqin is back with a clever little theme which I mostly ignored during the solve. 62a is clued as [Hilton hotel chain…or what 18-, 29- and 49-Across each have]. The answer is DOUBLETREE. Each entry has two distinct types of trees in them if you look hard enough. Did you see the trees for the forest (of letters)? 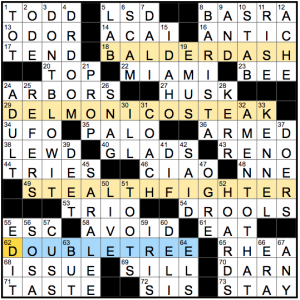 I for one like the fact the trees are not identified by shading or circles. Finding them feels like a post-solve bonus. That said, I’m having trouble with the third entry. FIG is great, but I’m thinking the other one is TEA. “Tea tree” feels like a bit of a cheat since TEA is contained within TEAK in the entry above. Also, it’s not as recognizable a tree as the others. I’ve heard of “tea tree oil” more than a “tea tree,” but apparently it’s not from around these parts, being native to Australasia. 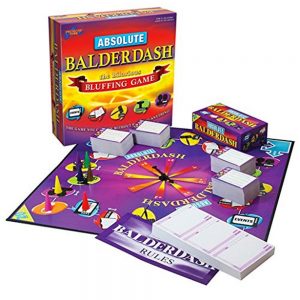 But aside from that, what a nice, fresh Monday-level theme!

Having only four theme answers lets our constructor show off her trademark command of colorful English phrases. I love “DON’T BLOW IT!” (3d, [Snarky comment after “This is your big chance”]), and AMEN TO THAT (32d, [“So true!”]) is equally fun. DR. DOOM, SARA LEE, and BARISTA round out the shiny long fill goodness.

Oh hey, there’s more in the way of botany: ARBORS, ACAI, IRIS, and GLADS (40a, [Some showy blossoms, informally]). We planted GLADS once. They start out nice, but once they’re done, they just droop over like they’re drunk.

I’m not finding anything to complain about in this grid; it’s super smooth and fresh. So I will close it here. Hopefully, the rest of the week will be just as lovely.

Hey, guess what?! I’m back and so is Zhouqin. (I reviewed her NYT grid above.) As many times as I’ve reviewed one of her puzzles, I need to get my spell-checker to recognize her name.

This one isn’t quite as smooth as her NYT puzzle, but it’s still cute. No revealer is necessary, so let’s jump into the themers. 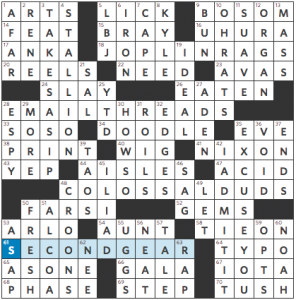 As I said, it’s cute even though the first two don’t sound like common verbal phrases to my ear.

The long Downs get better and better as you proceed left to right in the grid. They start with TAKES A SIP (fine), then STALLION (nice). In the SE we get “I ADMIT IT” (strong), and finally “EXCUSE YOU” (wonderful). Also good: DOODLE, “HOW SO?,” and “OH, RATS!”

In the negative column, there’s ADEN [Port city of Yemen], which might be tough for a new solver on a Monday (but they might as well learn it now, amirite?) and plural AVAS. Otherwise, it’s pretty smooth sailing.

Fave clue: [Bad thing in a croosword clue] for TYPO. I got a chuckle out of that. But who knows? Maybe that’s not a TYPO in Holland.

Whaddya think? A nice 1-2 from Zhouqin to start our puzzling week (and for all I know at this point, maybe she did the LAT, too). Here’s to more puzzles like these in the days to come. 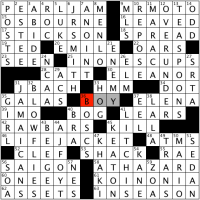 Instead of the student becoming the master, the master becomes the stream, the amster, and the estmar. ?!

I … have never heard of a MIX MASTER. It seems to be the lesser known step cousin of the KitchenAid stand mixer that my husband and I got as a wedding present a few years ago. A quick Google search comes up with as many (if not more) references to an anime series as that appliance – it’s never good when your revealer is the least well-known bit of the theme set and it didn’t do much for me when I finally filled it in from the crossings. I think a stronger application of this theme (though much more challenge to execute, clearly) would have been to take phrases containing the word master, anagram that word to make a new standalone word in the phrase, and then reclue the newly-wacky phrases. [Show featuring Aziz Ansari and others as out-of-work lion wranglers?] for TAMERS OF NONE could work nicely!

The fill was mostly accessible for a Monday puzzle, though there certainly were many outdated references and bits of crosswordese, including LELANNE, EOE, ALAI, ESSE, OLAV, REESE, EMAG, and ILA. Also, one quibble about the clue for 43d: it’s not the NEON GAS itself that illuminates a neon sign, but the electrification of that gas and subsequent emission of light that causes the glow. Otherwise, pretty standard fill/cluing. 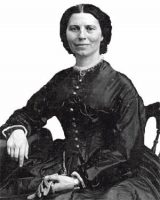 #includemorewomen watch: CLARA Barton founded the Red Cross, people! She was a Civil War nurse, suffragette, and absolute pioneer for her time. Did you know (via her Wikipedia page)?: “In 1855, she moved to Washington D.C. and began work as a clerk in the US Patent Office; this was the first time a woman had received a substantial clerkship in the federal government and at a salary equal to a man’s salary. ” Hard core! <3 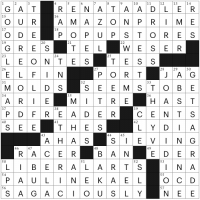 We’re rotating coverage of the new New Yorker puzzles; I’m up this week. And what a theme: women writers on each other! Anna herself has spoken out about gender disparities among crossword constructors, so it’s an honor to review her work.

I’ll just share my favorite quotation from a woman writer about another, Mary McCarthy on The Dick Cavett Show in 1979, about Lillian Hellman: “Every word she writes is a lie, including ‘and’ and ‘the.'” Dick Cavett wrote about it in — where else? — The New Yorker. Oh wait, no — my favorite is when Dorothy Parker and Claire Booth Luce both approached the door of a nightclub at the same time. Luce demurred, “Age before beauty.” Parker strode through the entrance and said, “Pearls before swine.”