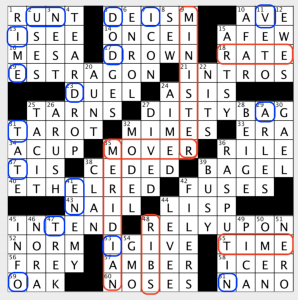 Welcome to the month of June–we’re looking this week for what this puzzle demands from you. Patience? Intelligence? A love of trivia? Let’s find out.

No obvious theme entries, but there are 6 starred entries of various (some quite short) lengths:

All of these can follow the word PRIME, but what to do with that information? I began to look for some other word that could follow “prime” (“suspect” was the most obvious suspect that I suspected but couldn’t find), so that became a dead end. My aha moment (after setting the puzzle down for a bit) was to look at the letters that are in squares with prime numbers as indicated in blue in the grid above. From top-to-bottom, they read UNDIVIDED ATTENTION, something I would say isn’t “demanded” by the puzzle (I had to put it down and come back to it to get the answer), but a great connection to prime numbers, which can’t be “divided” (or “broken” as the title implies).

A fabulous meta–just when you think you’ve seen every possible interpretation of prime numbers applied to meta puzzles, a refreshingly new idea comes up like this one from Mike. Bravo! I knew there had to be some reason for entries like ONCE I and A RUSH, and with all this theme material and constraints, it’s quite amazing that the grid was as smooth as it was. I’ll close with my frequent confusion with [Matriculate], thinking it means to graduate from a school, but instead it’s to ENROL in one.