Those of you who didn’t attend the Indie 500 crossword tournament this past weekend and haven’t ordered the puzzles to solve at home, I strongly encourage you to spend $10 to get the puzzles! They’re wonderful, all of them. Smart and clever, and with an inclusive vibe. You can order the puzzles via the registration page.—Amy

Do you know this app? OpenTable will help you with dining reservations all around the country, all around the world. “OpenTable Arrangements” [my italics…] is the perfect titular riff on this website’s name. Each of today’s five circled themers yields a kind of table (literal or figurative). The open part is achieved by way of the black square that separates one part of the table from the other. In essence, this means we get 10 additional themers—all those container words that allow for this clever kind of cruciverbal embedding. And literal word-play.

So—three tables with flat (enuf) tops and legs (of some sort, even trestle-style), one that’s a kind of chart, and one that is a “level” reading—specifically, the level below which the ground is saturated. Plus some fine containers: UP-TEMPO, “KERPLOP!,” BABA WAWA and BIOPIC among others. I’ll take it.

And there are many more PLEASURES to be found within. PLEASURES, for one, and SNOWSUITS (and thinking about how adorable toddlers tend look in those winter outfits). With a nod to Christianity, I also like the stacking of EPISTLES [Letters of the Apostles] above Saint NICHOLAS; and with an ecumenical nod to Islam, the EPISTLES/NICHOLAS-crossing appearance of ALLAH. [What a car engine may do when it lacks coolant] defines OVERHEAT. We would also have accepted [What a day in mid- or late-spring may do in an era of climate change]… With this thought in mind, it was especially refreshing to encounter the ARBOR [Shady resting place in a garden] combo. ODDEST and INNIES, drug BUSTS and the adjectival sense of the [Back-talking] SASSY pair, ANAHEIM clued in connection with Disneyland, and—now that the French Open is with us—the Williams sisters’ TENNIES all added to entertainment factor that was a big part of my solving experience. Even loved seeing the rhyming LEAVE and WEAVE in there since they’re there as grid opposites (the former in the SW, the latter in the NE).

I found the cluing especially strong today, by turns twisty/evocative/lively, not only in the examples already cited, but also with the likes of [Inspiring leader?], say, for AWE- (as in AWEsome and not GANDHI, e.g.); or [“It’s a shooting star!”] for “OOH!,“ because this is a sight that still has the capacity to take my breath away; and especially the trivia-rich [Watch brand that means “exquisite” in Japanese] for SEIKO. I never knew that. Did you know that? Even the calorie-rich [RED velvet cake] got my attention. [Purring shelter adoptees] for PET CATS creates such a specific scenario, doesn’t it? Ditto [Shirt-protecting lobster shack freebies] for BIBS. This is wonderful clue-writing indeed.

As you should be able to discern from my remarks, I feel that today’s puzz—which I also found to be a very smooth solve—has been particularly well-honed. How did it go for you? I’m gonna cut out now, but please feel free to register your thoughts. Will be back again with next week’s puzzle and til then, will keep solving—and hope you’ll be doing the same! Oh—will leave you with this final thought: 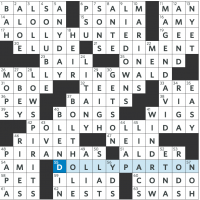 Well, kiss my grits! as Flo used to say. Those are pretty much the four extant actresses with -olly rhyming names and symmetrical enumeration. Elastigirl is certainly not Holly Hunter’s best or most famous role (props to The Piano), but The Incredibles 2 comes out in a couple weeks, so go cross-promotion. I love many things about Riverdale (it’s the dark, gritty TV reboot of Archie comics), especially the call-out to GenX with the casting of Molly Ringwald and Luke Perry as Archie’s parents. Dolly Parton’s best role was in 9 to 5 — but would you like to know what I think she should be best known for? The Imagination Library, which gives free books to children from birth to kindergarten, and recently mailed out its 100 millionth book. The Library of Congress just honored Dolly for her work in promoting literacy, particularly in the rural communities that she came from. 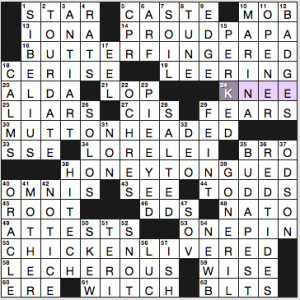 Oops, between social media and stand-up comedy clips and doing laundry, whoof, it’s 10:40 and time for bed. So!

Theme is hyphenated adjectives that are edible thing + body part + -ED. 16a. [Klutzy], BUTTER-FINGERED. 30a. [Stupid], MUTTON-HEADED, really not a common one. 38a. [Eloquent], HONEY-TONGUED (silver-tongued is the same thing). 55a. [Cowardly], CHICKEN-LIVERED. 23d. [Drunk], PIE-EYED. A bit inconsistent since chicken liver is an actual thing, the liver of a chicken, but butter doesn’t have fingers, mutton doesn’t have a head (sheep do, but mutton is just meat), honey doesn’t have a tongue, and if your pie has eyes, I do not want a slice of it. I’m also deducting points for KNEE being in the grid and EDGE being clued as [Lip]—would feel cleaner without those body parts.

3.5 stars. Here’s a stand-up set from Aparna Nancherla to play us out. 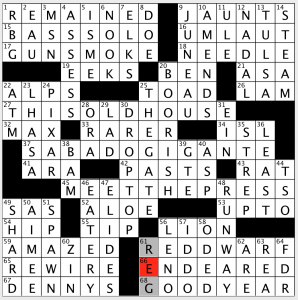 Longevity is celebrated here today! I can celebrate my longevity, since I am creeping near 50! But at least one of these TV shows got to be older than me!

I have, as you may have surmised, never seen Sabado Gigante, and I am not sure I have even heard of it. But this clip from CBS celebrates the end of its 53 year run:

I feel like I learned something! A solid 4.5 stars. 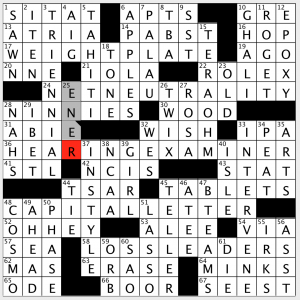 The theme here is revealed to 58-Across:

So we are talking weight loss, net loss, hearing loss, and capital loss. The accountant in me notices that there are two of these terms are finance related! Nice theme, tightly executed. I didn’t roll through this one in under four minutes like I usually do with these Tuesday puzzles, but it was still a fun one. Maybe I took my time! 4.3 stars for Sam from me.

A couple of more things: