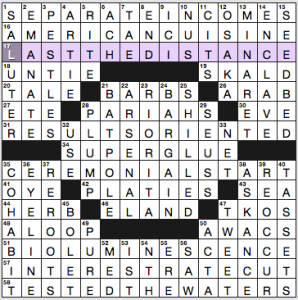 I approached this grid with great trepidation—not because it looked hard to solve, but because it looked like it would hold a lot of junky fill gluing together the eight 15s and the wide-open center. It was perhaps markedly less terrible than I’d feared, but still had its share of woeful entries.

LAST THE DISTANCE sounds unfamiliar and wrong to me. I think it may be a British version of go the distance. 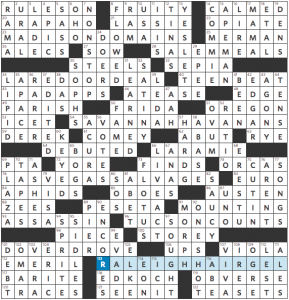 Most of these work pretty well, and I found the theme to be pleasant. SAVANNAH HAVANANS is fun to say, and RALEIGH HAIR GEL is a nice find. But SALVAGES as a noun doesn’t strike me as very common, and I wanted the TUCSON entry to be about vampires (although the census slant makes more sense). One American city (LARAMIE) and one state (OREGON) make it into the grid without being thematic.

The rest of the grid felt solid, smooth, and very clean. I felt like I progressed from start to finish without any major tie-ups.

But I’m struggling to find anything very flashy in the fill. I like TEEN BEAT, “YES, LET’S,” LIVE ACT, ONE-SHOT, ARAPAHO, SAUCY, and FLOTUS although, truth to tell, my initial thought on the clue on that last one [Melania designation] was that “Melania” was some kind of disease, I guess because it’s only a couple letters away from “melanoma.”

While there aren’t any long marquee non-theme entries, everything still felt solid and interesting. I found some intriguing pairings in COMEY and COMMIE, APEMAN and MERMAN, LIVE ACT and ENCORES.

Solid puzzle with some fun wordplay. 3.6 stars from me. 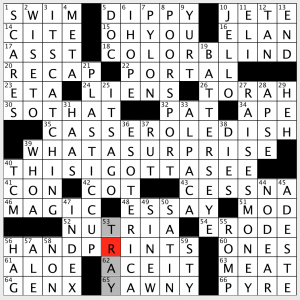 I think the last Greg Johnson LAT Saturday puzzle I solved also gave me fits. Again, I don’t track my times like a lot of you; I tried, but after years and years of solving, I know how long certain puzzles should take me, and I am not overly concerned with my “fastest time ever” on a certain puzzle. Having said all that, this puzzle took me nearly ten minutes, and normally for these my time is 5-7 minutes. I have stated before that Greg’s puzzles give me fits, and this one fits that bill. This is also a feat of construction: the triple stack of 13s in the middle is crossed by 9 and 10 letter entries. All packed in a 72 word grid. Extremely well done, Greg! 4.5 stars today.

Highlights, including those 13-letter entries:

As always, I feel like I could go on and on! Great puzzle all around. Have a great weekend! 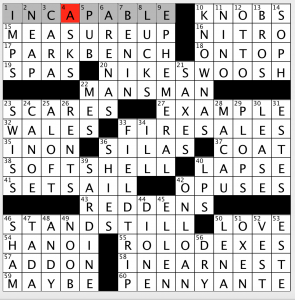 Twenty minutes with no error correction marks in a Frank Longo Stumper. I’ll take it! Maybe I am getting better at these after 20 years of solving them! It has been a while since one of these has made me overly frustrated. Perhaps it’s the warm weather that is finally now here! I thought I saw a typo, but there are 10 9-letter entries in this grid. And it is quite hard. I will be anxiously scanning the comments later today to see how tough others found this one. Frank is still a master. 4.6 stars for this gem.

Time for a nap! Enjoy your Saturday everyone.