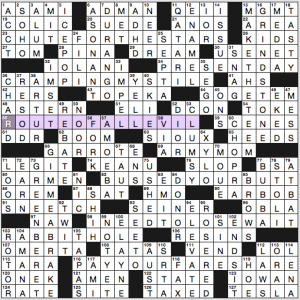 Gotta make this quick, as there’s a party to go to. The theme is familiar phrases getting one word changed to a homophone, and the resulting phrases are clued with reference to rush hour hassles.

3.2 stars from me. Enjoy your Saturday night if you are reading this before Sunday! 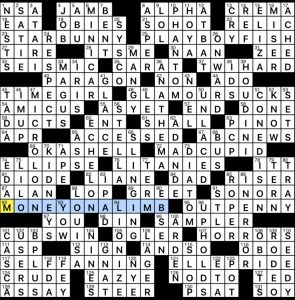 Phrases containing the titles of magazines swap their first words: 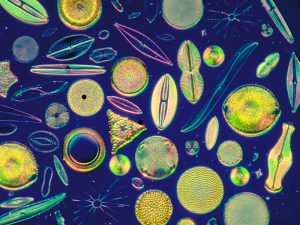 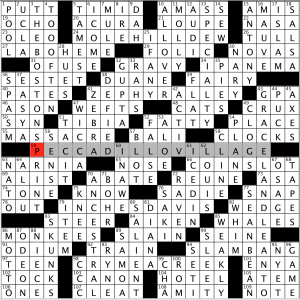 Base phrases are “downsized” to the effect that words for a smaller version of the usual thing are substituted, like so:

I’m not crazy about this kind of theme; I’d like to see more consistency in the transformations of the base phrases — for that reason alone it took me a while to grok. But it works fine and the results are amusing.

Here’s a cover of one of my favorite Gram Parsons songs, “Peccadillo Village,” by Steve Earle and Gillian Welch: 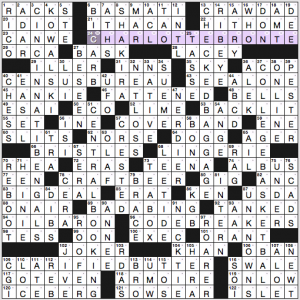 We have a very simple theme that I didn’t enjoy all that much: names or two-word phrases that start with C B.

The most challenging part of this was finding all the theme answers to do the writeup. I will acknowledge the nice variety of theme answer lengths and the number of theme answers that cross each other. Solving it wasn’t all that much fun, though. I prefer wordplay themes.

What I didn’t know before I did this puzzle: that Elizabeth Gaskell wrote a biography of CHARLOTTE BRONTE.

And why should I be the only one with the earworm?