“And How!” by Christopher Adams 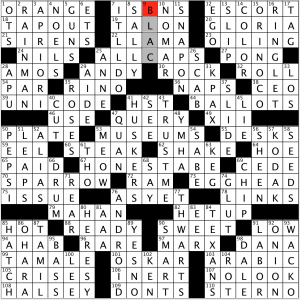 Full disclosure: I test-solved this for Chris like a year ago, and was completely stumped by the meta then; solving the finished puzzle professionally, I got the meta in an instant. Chalk it up to experience? The exigency of blogging?

We are asked: “What word that is made by combining two answers in the grid would have been an excellent title to this puzzle?”

There’s left-right symmetry in the grid, and a bunch of clues that don’t make immediate sense, until you start to notice a pattern in pairs of entries. Forgive me this lazy Sunday for not writing out all the clue/answer pairs, since there are many of them, but here’s the gist, in a list: AMOS/ANDY, ROCK/ROLL, STEAK/SHAKE, HOT/READY, SWEET/LOW, GUNS/ROSES, SLIP/SLIDE, SEE/SAY, DRUM/BASS, CHIP/DALE. At first I thought we were meant to supply an ampersand, and I was mentally composing a womansplainy comment to the effect of “welcome to the jungle, actually, it’s Guns N’ Roses not Guns and Roses” — and bingo, I realized that all of the pairs generally have an N rather than an and or an & — especially with the careful specificity of [30a: 1975 John Lennon album]: ROCK ‘N’ ROLL.

We could certainly quibble about the placement of apostrophes to denote the elided letters, but let’s move on to the meta. A friend in one of my solving groups remarked that they’re not fond of metas where you have to find a specific answer or pair or answers, since it can lead to slogging through everything in the grid. But this one is pretty clear, IMHO: you’ve got [9d: Model Chyna whose daughter is a first cousin of North West]: BLAC and [102a: Knowledge]: KEN symmetrically centered. BLAC + KEN = BLACKEN = black N; namely, the black square between theme entries is meant to be read as an N.

I thought this was fine ‘n’ dandy; what did you think, friends ‘n’ neighbors?

This entry was posted in Contests and tagged Christopher Adams. Bookmark the permalink.