Amy and I both have kids graduating from high school tomorrow. I’m filling in for her while she’s out to dinner.

This was a fun Monday puzzle, even with the circles. We have a central revealer and four pairs of theme answers. The revealer is 35a [“I’ve got this round!” … or a literal hint to this puzzle’s theme], which is DRINKS ARE ON ME. The circles show us ME  in four answers, and ON ME we have: 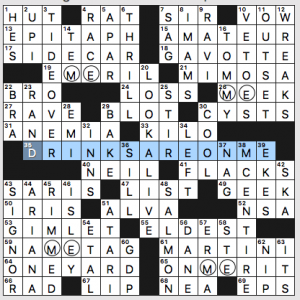 I wouldn’t drink those all in one place if I were you. This was a fresh theme, accessible for a Monday (thanks to the circles) and amusing. Some crosswordese crept in – do new solvers know pro TEM  and EMI?

What I didn’t know before I did this puzzle: that a GIMLET was a hand tool.

I leave you with this, because GAVOTTE appears at 18a. 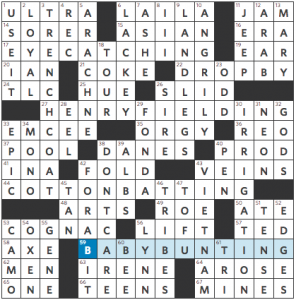 A nice set of entries, especially with the changes in meaning for the keywords. However, one could argue that BUNTING would fall under the category of BATTING. By the way, I never knew what BABY BUNTING was. Seems like putting a hood on a baby’s sleeping outfit is asking for all kinds of trouble.

Fave fill: “DON’T CARE,” TRENCH COAT, VIETNAM, ARACHNE, COGNAC, and LAND LEGS even though I’ve never heard of the latter. Makes sense, though, since “sea legs” are certainly a thing. 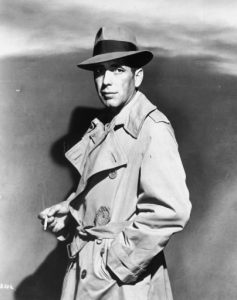 I was surprised to see this was under ten minutes. It felt way longer than that. There were difficult bits all over the place, especially in the central west. The difficulty came both from vague or misdirecting clues (totally fair and even desirable in a puzzle at this level) and from unexpected or unfamiliar entries (also totally fair). I am not complaining. I really enjoyed this puzzle. Here are a few reasons why: 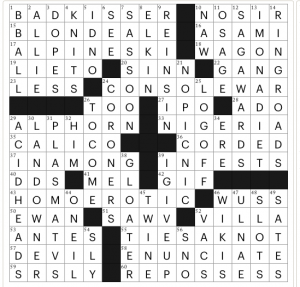 As Kameron says at 59a, this is a SRSLY good puzzle.

What I didn’t know before I did this puzzle: that LESS by Andrew Sean Greer won the Pulitzer Prize for Fiction in April. 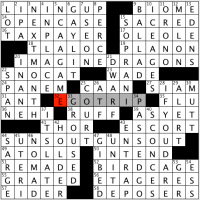 Quite the airy Monday LAT: 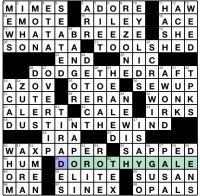 This was a pretty straightforward theme, but it felt a tad inelegant to me for two reasons:  Two of the themers use the last word in the literal sense, while the other two make use of homonyms instead.  Also, DODGE THE DRAFT feels like a clunky rephrasing of draft dodger / smells like a bit of fresh, green paint.

WONK, WAX PAPER, SINEX, IMHO, A WORD, NEWISH, and XMEN were all CUTE entries in the grid.  PGUP certainly IRKS me, as do AZOV, CALE, and OLEO.

#includemorewomen watch: With June as LGBTQ+ Pride Month, who better to celebrate from this puzzle than the gay icon herself, Judy Garland as DOROTHY GALE.  <3  Before it was safe (or as safe as it is today) and legal to be out as a queer in the US, gay men needed ways to identify each other covertly without risk of being arrested or worse.  One way they did this was to use terms like “friend of Dorothy” (instead of “gay”) to subtly self-identify to only those who needed to know / knew what the term meant.

But what did straight folks do when they heard about this mysterious Dorothy that all us gays seemed to know?  Join me in a hilarious anecdote, as retold on the “Friend of Dorothy” Wikipedia page:  “In the early 1980s, the Naval Investigative Service was investigating homosexuality in the Chicago area. Agents discovered that gay men sometimes referred to themselves as “friends of Dorothy”. Unaware of the historical meaning of the term, the NIS believed that there actually was a woman named Dorothy at the center of a massive ring of homosexual military personnel, so they launched an enormous and futile hunt for the elusive “Dorothy”, hoping to find her and convince her to reveal the names of gay service members.”

Needless to say, DOROTHY GALE will never talk.  (And we’ll never tell you where she’s hiding!)  Happy Pride, everyone!