Title: “Song Circle”
Prompt: The meta for this puzzle is the song (of the four) with the shortest title. 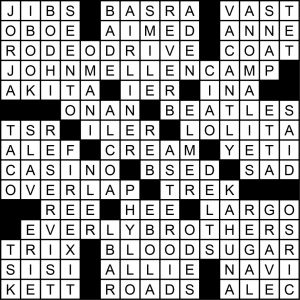 I hadn’t noticed the other theme entry while solving: 47-A, symmetrically placed 27-A, is [What the four song titles you’re looking for do], but I had figured from the title that our song titles would indeed OVERLAP.

My first pass at Googling a loop of song titles from these four was unsuccessful — their catalogs of hits/well-known songs are all pretty large, plus there’s no guarantee that one or more of them wasn’t a deep cut. But on my second pass I noted Mellencamp’s “Hurts so Good,” and realized that “Hurts” was probably a good last word in a song title. And lo and behold, the Everly Brothers (with whose work I’m not highly familiar) did “Love Hurts.” And the rest was easy…the circle of songs are:

HURTS SO GOOD by John Mellencamp
GOOD DAY, SUNSHINE by the Beatles
SUNSHINE OF YOUR LOVE by Cream
LOVE HURTS by the Everly Brothers

Pete asked us for the song with the shortest title, which is LOVE HURTS, found by 244 solvers as I type this a half-hour before the deadline.

Mama’s got the pipes, but emo kid steals the show.

Some people don’t like Googly meta-hunts solves like this, but I don’t mind then once in a while. Think of Google as an extension of your brain, or imagine you’re on a treasure hunt. Metas don’t have to all be a certain way.

4.25 stars from me. It’s a nice find, and probably tougher to find a tight song circle like this than it appears. But I’m 6-for-6 and don’t feel I’ve really been tested yet this year. But I know it’s coming…