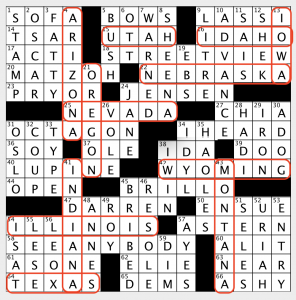 Timely theme this week in the WSJ Contest puzzle, we’re looking for a U.S. state that’s not one of the twelve already in the grid. Let’s hope all of our crossings are legal, and since we’re remaining in the U.S., it looks like they will be.

I’m just going to list the 12 states in the grid from west to east: OREGON, NEVADA, IDAHO, MONTANA, ARIZONA, UTAH, WYOMING, TEXAS, NEBRASKA, IOWA, ILLINOIS, and INDIANA. Impressive to fit all twelve of these in a 15×15 grid, but how do they point to a (lucky) 13th?

Well, my first thought based on the title was to highlight the letters which are shared by two crossing states–that gives us NEOAMIA, which doesn’t anagram to anything, but tantalizingly has all of the letters of the state o’ MAINE in the set. I tried to justify not including two of those seven letters, but I was also troubled by lonely UTAH at the top of the grid which didn’t cross any of the other states. 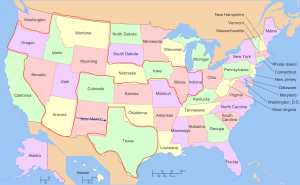 So to a map I went and drew a line around the states, wondering if they all would be contiguous. Indeed, 11 of them are; here only TEXAS is the outlier. So what if New Mexico were included? Then you could draw a line around all 13. I’m not completely sure about this strategy, but it was helpful to see that no other one state could be added to the set to accomplish this continuous line.

This meta reminded me of this week one puzzle from Matt’s site, I believe geography is one of Matt’s favorite go-to disciplines for meta inspiration. I’ll close with what seems an odd clue to me, [Question to a person using binoculars] for SEE ANYBODY? as we more often use binoculars to pick out distant birds or boats on the lake as opposed to people, but this is Vermont where I believe there are more cows than people!