Oh, man… Just say the title and the earworm starts. I’ll leave it to you to track down this iconic Beyoncé tune on your own. Yes, the theme is female-centric; but no (whew!) it has nothing to do with anyone’s “relationship status.” Instead, Liz gives us an array of four stellar women, each (as the clues make clear) a genuine standout in her field (gymnastics, film [2] and music), each of whose names contain the word ONE—the word that also sits at 40A., directly center in the grid and clued as [Single in a wallet … and a feature of the four starred answers]. The first word across at 1A. is OOMPH, and between the theme, the themers and the remainder of the fill, that’s something this puzz has in spades.

In addition to this dandy array of dames, the puzzle also shines a light on Joni Mitchell, by way of HEJIRA [Joni Mitchell album whose title means “journey”]; [Clark’s girlfriend] LOIS Lane; [“Jimson Weed” painter Georgia] O’KEEFFE; HELEN, that [Beauty of Troy]; and those [May honorees], our MOMS.

With all that estrogen running through the grid, we also get gender parity through: ARI Gold of Entourage; ABE Burrows (he of Cactus Flower fame [among a looooong list of writing credits for stage and screen, both large and small…]); [Author Umberto] ECO; LON [Horror film legend Chaney]; REACHER [Jack in a Tom Cruise film] (a character-name eponymous film at that); ARES [Mars, to Greeks]; and (for men and women alike) the NCAA, that [March Madness grp.]. “THEN…,“ because it summoned thoughts of the Hunter S. Thompson, the GONZO [Freewheeling type of journalism] pair, too.

All of which makes for a high-OCTANE solve, imho. With lots to ADMIRE and little to LESSEN the enjoyment. Context is everything, which is why I liked the colloquial [“There’s nothing LEFT TO say”] and [Well-HEELED (affluent)]. Also the NASA-related reminder that [“Failure IS NOT an option”]. And how about that [Pro with a racket?] CONMAN pairing. I’m one who’s guilty of first trying to make NET MAN fit… D’oh. In addition to finding this puzzle to be association-rich (see also: EDITOR, OP ED and GONZO, and ODIE and ALPO), I also found it to be a particularly smooth solve. How’d it go for you?

The clue that took me aback some (yet also amused me)? That’d have to be [Fax button] for SEND. I SEND my share of documents electronically (love my little ScanSnap), but it’s been yeeeeears since I’ve sent a fax. “It’s a new world, Golde…”

And with that, folks, adios for today. Am hoping the week ahead will be a good one for you, that you’ll stop by again next week and that, regardless, you’ll keep solving! 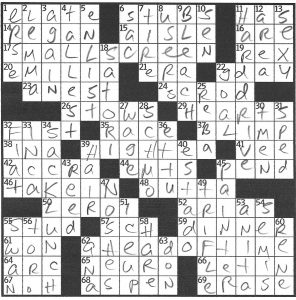 Hello! This is Andy, subbing in for Laura today. I hope the solution grid is legible: I’m solving almost all my puzzles nowadays on paper, so I decided to scan in my grid instead of resolving the puzzle in the WSJ applet.

Today’s theme is revealed at 62a, AHEAD OF TIME [Early, or a hint to where each half of each starred answer can be found]. Let’s look at those starred entries:

Of the eight “___ time” phrases, only “sack time” was unfamiliar to me, but it means exactly what I suspected it did. This is a fairly straightforward early-week theme, but it’s nicely executed: all four theme entries work well as standalone phrases and as “___ time” phrases, and the revealer, AHEAD OF TIME, is perfect.

I’ll be back with the Thursday NYT review… until next time!

Jim here sitting in for Amy who is attending her son’s high school graduation. I will be doing the same on Friday night (except for my son, not hers).

We have a dynamic duo today bringing us a whole mess of hot shoe action! 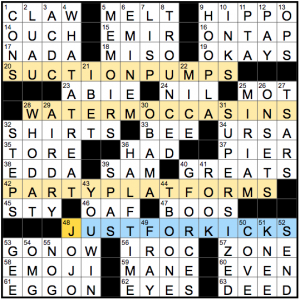 Cute theme which I found to be enjoyable. However, I’m not feeling that the revealer ties things together. I get that it’s meant as a more literal joke, but I don’t think the cat burglar is intending to do much kicking. That might defeat his purpose. I think it would have been nicer if a fourth entry were found since a revealer really isn’t necessary.

Still, it was cute, and JUST FOR KICKS is such a fun entry. But do you think they’re trying to manipulate us subliminally with entries like GREATS, SUPER-SIZED, HOOPLA, “YOU WIN!,” and “WHAT A TREAT!”? Well, it worked on me.

Some crusty bits crept into the grid like ABIE, EDDA, and dated IROC. WHO DAT also feels dated, but there’s other good stuff in there like G-FORCES (with clever clue [Pressing concerns for astronauts?]), HALFTIME, and MEMOIRS.

And did you notice the pseudo-selfie at 39a [Newsman Donaldson]? Fair’s fair, though. Where’s TRACY? 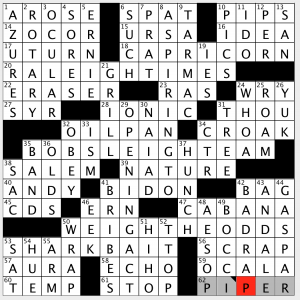 We have another milestone for this week’s Jonesin’ puzzle. Not many people have made nearly 1,000 puzzles, but just for this venue alone this marks the 888th puzzle, which translates to just over, at one each week, 17 years of Jonesin’s! I think Matt had a similar theme for 777 or 800, I don’t remember. I will try and look that up later today, but no promises! Each them answer today, appropriately, has a hidden EIGHT:

Nothing overly special here, other than the usual nice solving experience. I will give plenty of kudos for the longevity. I am curious to see what Matt has in store for number 1000, which will be around August 2020! There are a couple of toughies in this grid, but I don’t notice the pretty-much-weekly obscure pop culture ref this week. Or maybe I just knew them all this time! 4.3 stars this week. 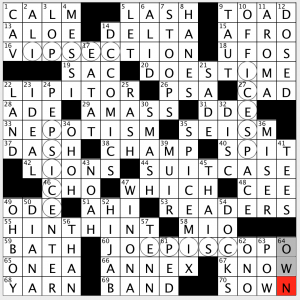 Under three minutes! I tried to hurry, and I have done so many of C.C.’s puzzles that this one fell easily. We have an anagram theme today, with a revealer in a unique position at 35D:

I thought the revealer might be in the middle, but it is better in this spot. It should be more towards the end, and it is in a spot you don’t think it would be, which lends to the solving experience. A pleasant solving experience again by the prolific C.C. Burnikel. A solid 4.4 stars today.

Have a great week everyone, and I will see you on Saturday.