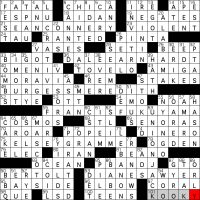 hello and welcome to episode #523 of matt gaffney’s weekly crossword contest, “Why Don’t You Go First?”. for this week 2 puzzle of guest constructor month, we have jeremy horwitz, our second consecutive san franciscan, and an appropriate constructor for a puzzle with this title because he won mcwcc #1, ten years ago. jeremy challenges us to find a country musician. i didn’t figure out this meta—or at least, i haven’t yet figured out this meta. let’s see what the theme answers are, shall we? jeremy has gone to a 19×19 grid to fit the full names of six famous(ish) people:

okay, so. connery was of course the first james bond, notably missing from the clue, so that seems like a starting point. meredith was most famous (to me, anyway) for playing the penguin; the rocky trainer in question is named mickey goldmill, and it may be significant that the clue does not include the name. likewise, the grammer clue notably omits the name frasier crane, although that is the role in question. so those are striking.

the problem here is francis fukuyama. i’ve heard of him, but there is basically nothing else to say about him other than he wrote that book. (or at least, it would be strange to require knowledge of him beyond that in order to solve a meta.) that leads me to think that maybe just francis is the relevant part of that theme answer—but there isn’t really another famous kelsey or burgess, so i’m a bit at a loss. there are connections between the clues for the three actors, but the driver, the political scientist, and the tv journalist don’t really fit in.

what about the title? other than “first”, the relevant part could be either “why” or “you”, which are homophones of the letters Y and U. i don’t really see where this is going, either. FUKUYAMA contains both a Y and a U (two U’s, actually), but BURGESS MEREDITH and DALE EARNHART contain neither.

okay, well, what about this—if it is the first names that matter, then DALE goes with chip, in the sense that chip ‘n dale are a pair. similarly jack & diane. i don’t know where the others are going. there is presumably some way to find them? or there would be, if that were what we were looking for. i don’t think the meta is going to hinge on obscure duos, though, so if there aren’t others as famous as chip & dale or jack & diane, that is probably not what we’re supposed to be doing.

well, i guess i’m out of time. i’m a little embarrassed to be stumped on a week 2, especially one that seems to be trivia-oriented (normally a strong point of mine), but i’m just not seeing it this week. bummer.

This entry was posted in Contests and tagged Jeremy Horwitz. Bookmark the permalink.