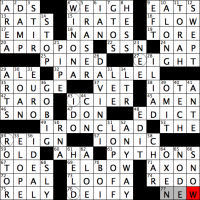 hello and welcome to episode #524 of matt gaffney’s weekly crossword contest, “Except After”. for this week 3 puzzle of guest constructor month, we have Anna-Marie Ruoff, who challenges us to find a five-letter word that describes the theme entries. okay. well, what are those theme entries? that turned out to be the big question, because there aren’t any long answers in the puzzle. there are a few 7s and 8s, and that’s it.

it does stand to reason that there might be five theme answers, because we’re looking for a five-letter word as the answer. it took me a little while to realize that they aren’t long answers; in fact, they’re five-letter answers. which ones? well, the title is the big hint. “except after” refers to the spelling rule “i before e, except after c”. so we are interested in the five words that contain EI or IE:

all of these are violations of the spelling rule—four of them because they have E before I, and ICIER because it has I before E even though the preceding letter is a C. reading off the first letters of these in top-to-bottom order in the grid, we get WEIRD, which is an apt description of the rule-breaking theme entries.

i thought this was an unusual puzzle, for a number of reasons. the biggest is that there are only five short theme entries in the grid. that made it a little more challenging to identify which theme answers there were (although it still ended up being a lot easier than week 2), but it also made the crossword itself a bit less satisfying to solve. with no long answers, i expected there to be more medium-length answers, but this was just a lot of short answers, leading to a very high word count of 84, for a crossword that had only 25 theme squares. so that was a little surprising, and not in a very good way.

i did enjoy the meta mechanism, and i liked how ICIER put a twist on the others by violating the spelling rule in the opposite way as the others. that was cute. but perhaps if this is the meta mechanism, the meta answer should have been a little longer, so that there could have been more theme content in the crossword itself. off the top of my head, i don’t have a great suggestion for a better answer. RULE BREAKER is a little too long. what about I BEFORE E itself? that might work—eight short-to-medium theme answers is enough for a 15×15 grid.

the other feeling i had was that the title was a little too spot-on—it tells you basically exactly what to look for. so now i’m imagining the alternate puzzle where the answer is I BEFORE E, the instructions are something like “the answer is a rule broken eight times in this puzzle”, and the title somehow hints at the rule a little more obliquely. i dunno.

that’s all i’ve got this week. your thoughts?

This entry was posted in Contests and tagged Anna-Marie Ruoff. Bookmark the permalink.