SO close to a sub-three-minute Wednesday! And yes, this puzzle was easier than average (at least for me). Despite that, I enjoyed the theme.

We have five theme answer which are all missing something. 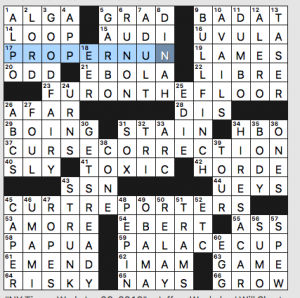 All the base phrases are solid and the themers are amusing. Not difficult, but lots of fun.

What I didn’t know before I did this puzzle: that DUMBO was Disney’s fourth animated feature film.

Theme: Certain phrases are given literal re-imaginings, resulting in odd or even dangerous behavior. Don’t try this at home, kids. 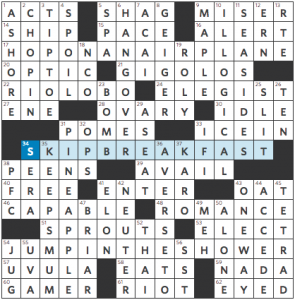 So I had problems with two of the three entries, but when I saw they all started with a HOP, SKIP, and a JUMP, the puzzle redeemed itself somewhat. I thought that was a cute touch that tightened up the theme just enough to make it work.

However, I’m none to keen on GIGOLOS (clued flippantly as [Money-making company?]). Would you put PROSTITUTE or CALL GIRL in a grid with that clue (or at all)? I don’t think so. Apparently there is, or was, a Showtime reality show simply titled GIGOLOS that lasted for six seasons. If you need to have this in your grid, clue it straight with a reference to the show, perhaps.

As you can see, there was a fair amount of hit-or-miss for me. I feel like this just needed a little more tweaking to make everything hunky-dory. As it is, I’ll rate it at 3.4 stars. 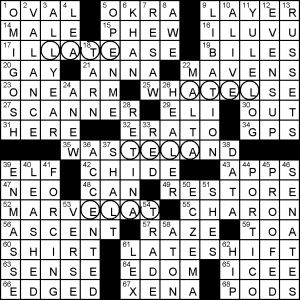 LATESHIFT is a classic anagram type revealer. However, although LATE can anagram to TALE and TEAL, and, less promisingly, TAEL and ET AL, the tetragram is instead buried between two answers, which is the less elegant path, in my opinion. The entries are fair to middling, with WASTELAND lacking a THE (without it, it’s normally spelt as one word) and the AT of MARVELAT being a bit gratuitous… 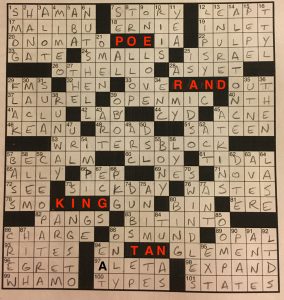 This week’s AVCX had some special stuff going on in the grid that meant there was only a .jpz option for a digital puzzle.  I took this as a chance to go off the digital grid and onto the analog one for a leisurely untimed solve, using my best penmanship for the screenshot at right.  Let’s break down what’s going on inside of “Draft Dodging”:

What initially looks like some interesting grid entries are revealed to be areas of black squares blocking out an author’s name in each of the theme entries: Edgar Allen POE (no stranger to crosswords) in ONOMATOPOEIA, Ayn RAND in OVER AND OUT, Stephen KING in SMOKING GUN, and Amy TAN in ENTANGLEMENT.  I thought this might be a secret Rock Bottom Remainders themed set of authors, but both Poe and Rand are, as I write this, still very, very dead and not part of the band, so that’s not the case after all.

The larger grid here made for a nice puzzle to tackle at a slower pace and savor some of the fill.