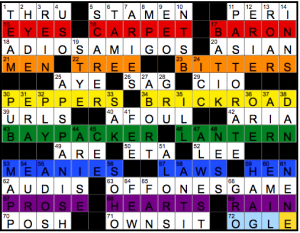 I’m glad I solved this one online, because the image to the right is what displays after you solve the puzzle! A nice cherry on top of a great puzzle.

In honor of LGBT Pride Month, we get a puzzle with a rainbow flag (which traditionally has just these six colors, lumping indigo and violet together into purple). Except! The words along each colored stripe have had that color removed from the grid. That’s a complicated explanation — let’s just dive in:

In order to get that rectangular flag shape, this grid is 17×13, with a roughly appropriate 80 words. This is a stunning accomplishment of construction. Nearly half of the puzzle is made up of theme material, which means that every non-theme row is extremely constrained, and yet the fill is relatively solid (which is an enormous accomplishment!). ADIOS AMIGOS and OFF ONE’S GAME are both lovely long entries, and AP SPANISH is lovely coming down in the SW. PASTORATE isn’t superb, but it’s perfectly serviceable, and the short fill ranges from lovely to fine. 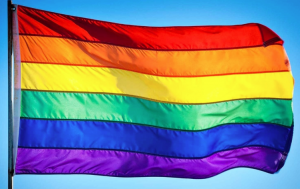 The “aha” moment was really great on this one, and it didn’t feel like homework to finish the puzzle even after figuring out the theme. Really stunning, worthy of the NYT Thursday slot and potentially a Puzzle of the Year nomination. Great work!

We have two 15-letter theme answers that at first glance make no sense. 20a [Overturned, as a boat] appears to be CAPSTATSTHEWAVE. I figured out part of the trick when I got to 6d [Emulates an ocean?], which intersects 20a at the second S. I realized that the answer turned the corner and ended up as DOES THE WAVE. Aha! Then I went back to the beginning and tried to figure out where the answer to [Overturned] made its turn. When I finally realized there were three “turning” answers, it felt like a lightbulb exploded in my head. I made a very crude visual aid: 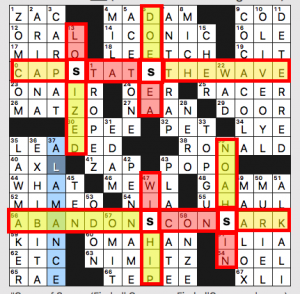 You can see that every answer in each themer takes a turn at an S, so each 15-letter entry has three theme answers.

Six nautical theme entries, each taking one or two turns at an S or two, and several with misleading and amusing clues. That’s a lot of puzzly goodness right there. At first I thought the title simply referred to the prevalence of scurvy among naval crews back in the day – and then I realized it’s S-CURVY, referring to the turns of each answer. And the theme S’s are the only S’s in the grid. BRILLIANT. A construction tour-de-force that is also a lot of fun to solve. Did I mention I love this puzzle?

And the non-theme fill is excellent. A few highlights:

What I didn’t know before I did this puzzle: I’ve never heard of the War of the Regulation, which apparently ended at the Battle of ALAMANCE. Wikipedia tells me it involved political corruption, British colonialism, and beleaguered farmers. “The stated primary aim of the Regulators was to form an honest government and reduce taxation.” We’re still working on that first part.

Nifty theme today with a perfectly apt title. We’re presented with phrases in which the last word can be written backwards thus forming a different word and inspiring an appropriately wacky clue. 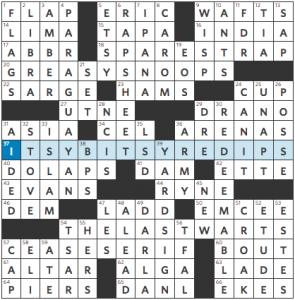 Interesting theme placement in the grid. The first two and last two are stacked atop each other for seven letters. That’s pretty unusual. You have to have very compatible sets of letters where the overlaps occur. For the most part, everything works well, even giving rise to long nice long Downs RAP SHEET up top and YARD SIGN down below. The toughest pairings are the TS starting at 54d  and the TF at 56d. The first one is do-able with TSAR, which is a common enough entry in crosswords. The second one is harder and begets T-FAL, the cookware brand, which in turn begets ALGA and DAN’L. Not stellar fill, but given that that’s the roughest pairing in all those overlapping theme squares, that’s pretty good.

It doesn’t appear that it had to be that way. I think the second and fourth themers could have been moved inward one row without too much difficulty. But if you can get themers to stack without causing too many compromises, that should free up space in the rest of the grid for fun fill.

I don’t know that I would consider PARAGUAYAN and REDEEMABLE to be fun, but they are interesting given their clues [President Horacio Cartes, e.g.] and [Like some stocks and souls].

On the whole, the fill is solid and the clues weren’t too tricky (if stretchy in places), but it was the theme that carried the day. Good puzzle. 3.7 stars.

And now, an homage to Matt Dillon’s repulsively greasy snoop in There’s Something About Mary. (Some NSFW language.) 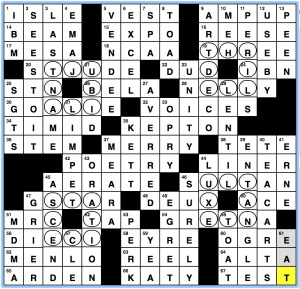 This week’s BEQ Thursday plays like a themeless, even though it has a theme.  Four series of circled squares form loops in the grid that create MERRY go-rounds, per 37A.  We’ve got JUBILANT, THRILLED, ECSTATIC, and EXULTANT from each wheel, so I’d say that’s spot on. 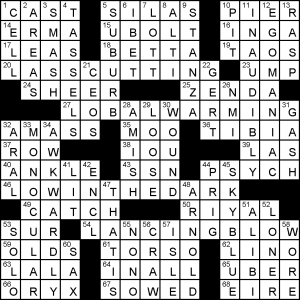 Today, words beginning with “GL” become “L” and new phrases are “wacky”. We start with (G)LASSCUTTING; unfortunately, in the 21st century, CUTTING is more associated with physical self-harm than skipping school. I wouldn’t have ran that. (G)LOBALWARMING is the second, and although the [ears are burning] clue angle is cute, it’s telling that LOBAL has never been in a crossword on its own. It got better though, with (G)LOWINTHEDARK and somewhat violent (G)LANCINGBLOW landing a lot better than the first two. No revealer either, so this puzzle lives and dies by the quality of its four theme answers…