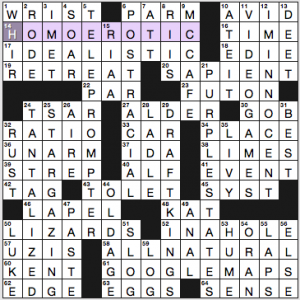 Kind of a weird-looking grid, with that 3×5 island (at low tide) in the middle. Lots of good fill occupying the long zones, though: HOMOEROTIC and IDEALISTIC, GOOGLE MAPS, TANTALIZED (show of hands: how many of you would be tantalized if someone dangled a literal carrot in front of you? Anyone? Bueller?), STARGAZING, TELEPROMPTER, the no-that-doesn’t-exist-yet POSTRACIAL, DRAFT KINGS (it’s big money), PURPLE STATES, VIDEO GAMES, and “I’M INNOCENT!” I also like SAPIENT, LIZARDS, and MCCAFE.

Grubby bits: TSAR, TO LET, SYST. Not too much offsetting the sparkling long fill. 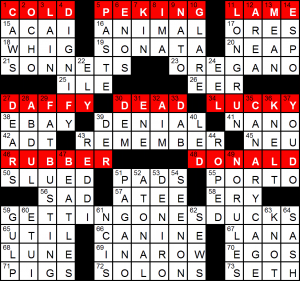 Today’s grid has left/right symmetry (and an extra-long grid) to support an irregular set of theme lengths, or at least support a 16/6 revealer more elegantly. Apart from the revealer, the answers are all short words that can be completed by DUCK. I don’t know about you, but I figured out the theme quite quickly and then rote filled the rows. I also suspected what the theme revealer would be, but tripped myself by putting FATBurnING and BEegeES. It’s a neat revealer, though it was far from an a-ha.

I didn’t know COLD(DUCK), which seems to be an American brand of a sort. I also didn’t know PAGANO (surprised?) and the particular LANA [Parrilla], but mostly fairly few difficult answers. Some weird short bits like ERY make it appearance, but the grid isn’t off the rails today. 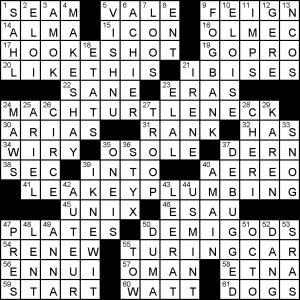 Mad Scientists is the title, and we have four wacky (i.e. mad) phrases where one word is replaced by sound-alike name of a scientist. The clues refer to both parts of the original phrase AND the new scientist, which is non-standard, but necessary in this case.

HOOKESHOT refers to Robert Hooke, who contributed to a variety of fields, but is best-known today for a set of concepts now referred to as cell theory: the idea of the cell as the building block of all life. MACHTURTLENECK is based on mock turtleneck, a garment I hadn’t till now heard of; I know what a turtleneck is and Carroll’s Mock Turtle, so this entry confused me; Ernst Mach made a number of contributions to physics. I pronounce his name with a different vowel and consonant to “mock”, so this doesn’t quite work in my version of English – YMMV. LEAKEYPLUMBING refers to paleoanthropologists Mary and Louis Leakey (and their offspring). Lastly Alan TURING is the mathematician referred to in TURINGCAR. His major work was in WW2 with the Enigma machine as well as pioneering contributions to the field of computers.

I particularly enjoyed the extra effort in several clues today:
[Order more Food & Wine], RENEW; a long quip from Mort SAHL; the use of “nyctophobes” in the ELOI clue as well as “tippy-top” in the ELOISE one; the clever, if not very misdirecting, clue referencing Philadelphia and Chicago for GERE.

For the record, I prefer FLANGE for a [Group of baboons]. I’m not sure where Pannonica stands on this issue.