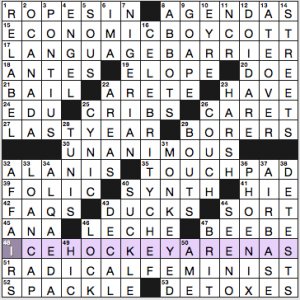 Am I the only one wishing that 48a ICE HOCKEY ARENAS split up 8/7 or 7/8 like the other 15s do? ICEHOCK EYARENAS! ECONOMIC BOYCOTT, LANGUAGE BARRIER, and RADICAL FEMINIST are all solid two-worders, as is the CELEBRITY CHEF that connects them all.

ARETE, NCR, and SEE NO are the worst fill here, so nothing atrocious. 4.2 stars from me.

To play us out, a delightful and touching video of late-night host James Corden taking Paul McCartney on a nostalgia tour of Liverpool. It’s got nothing whatsoever to do with the puzzle, but I think you’ll like it. 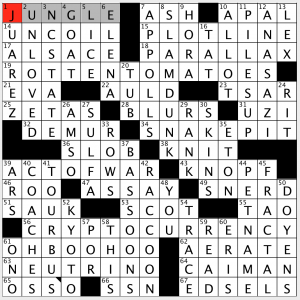 Back to a quick time this week again. I am in the middle of switching jobs, so I have a little time off in the interim, which I think is lessening my stress. There are other factors that are still causing some stress, but that’s life, right?!

I digress. This puzzle is actually really good. There are two 14s cutting through that both are timely, and this grid is a Q short of being pangrammatic. Sometimes it helps for a quick time when there is very little dreck in the grid, and that seems to be the case here. Yes, I have one error mark, but that was a typo! 4.6 stars today. 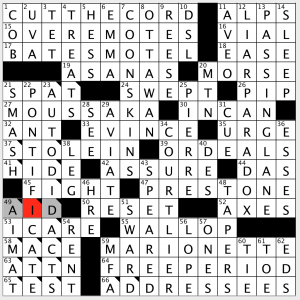 I thought I was well on my way to a sub-10 minute solve this week, but I ground to a halt after about 7 minutes with 75% or so of the grid filled in. As you can see in the image, the SW section gave me superfits, and the bottom stacked 10s I didn’t find much easier. but after a couple of answer checks, we gutted this one out in a still somewhat respectable sub-14 minute time, and I’ll take it! This is still an extremely difficult puzzle, but I thoroughly enjoyed the delightful agony this week. 4.7 stars from me. 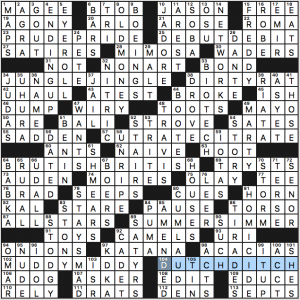 As you can see, words that differ by only a U and an I have been paired up to create wacky phrases. Not a bad theme, but not the most scintillating. I expect solvers like a little more challenge from a Saturday 21x.

I did not know that Viagra was a citrate nor what a citrate is. (Does it taste like lemons?) Nor did I know a loose-fitting blouse was called middy.

Dislikes: B-TO-B, ASKER, EDUCE, IT UP, whatever KDKA is, and [Canton of central Switzerland] URI (although this last one could be a theme revealer of sorts).

New to me: MOIRES [Unintended printing patterns], BOOTES [Arcturus’s constellation], clarinetist PETE Fountain, and that the tiny West African country of BENIN was called Dahomey prior to 1975.

I did like the clues for BOND [No foe] (that’s Dr. No to you) and SEPTS [Places of worship, in Westeros] (Game of Thrones reference). I am surprised that we don’t often see that the Game of Thrones equivalent to the title “Sir” is “Ser.” You would think that would crop up a lot in crosswords assuming non-fans could stomach it.