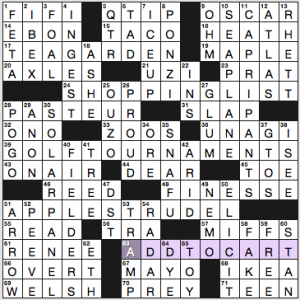 Smooth Monday theme. The revealer is ADD TO CART (63a. [Message clicked on by an online buyer … or a hint for 17-, 24-, 39- and 51-Across]), and those four themers all begin with a word that can precede cart: TEA GARDEN, SHOPPING LIST, GOLF TOURNAMENT, APPLE STRUDEL. Small ding for shopping cart being exactly what the virtual cart is in ADD TO CART.

Another ding for a few entries that aren’t likely to be too familiar to newbie solvers: EBON, HEATH clued as [Tract of low-growing shrubs], GTOS, maybe UNAGI, maybe IBEX. 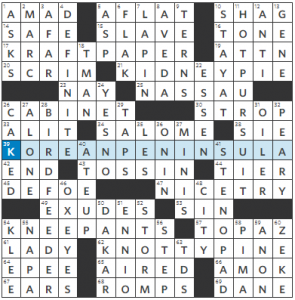 I’m sure you figured out the theme, so I won’t go into it. It’s pretty Mondayish, but not bad for newcomers.

HOT PURSUIT makes for great long fill and BIRD FEEDER (with the nice clue [Seedy spot?]) is almost as good. STENO PAD and DEFINITE aren’t as shiny but solid, of course. “NICE TRY” is also worthy of a mention.

There are a couple of tough pairings for a Monday. Up top there’s LAPIN [Rabbit fur] next to AVEDA [Company that sells natural and organic skin and hair products]. I don’t think I know this latter entry; I know Aveeno, but not AVEDA. Almost exactly opposite in the grid is the pair DAKAR [Senegal’s capital] and ENNIO [Film composer Morricone]. These might be tough for a newcomer, though I had no problem with the latter as I have loved the soundtrack for Cinema Paradiso for years. Morricone is also known for The Good, The Bad and the Ugly, The Mission, and scores (haha) more. His most recent big win was his score for Tarantino’s The Hateful Eight in 2015 (he won the Oscar, BAFTA, Golden Globe, and ASCAP for that one).

The straightforward theme probably won’t excite too many old hands around here, but it makes a good starting point for newbies. Some trickier entries might confound, though. 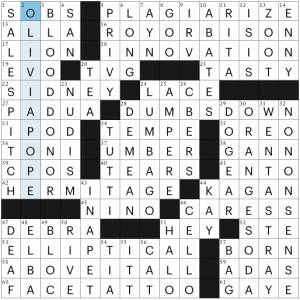 Lovely quartet of triple-stacked 10s here: nary a plural -S or tacked-on affix (-ness, -ly, re-, etc.) to be found. Two great names, OLIVIA POPE and ROY ORBISON. The contemporary vibe of FACE TATTOO. Plus a good pair of 9s: HERMITAGE and DUMBS DOWN.

A quick write-up today, as I just stepped off a plane from London. C. C. Burnikel sure sensed that we were pressed for an enjoyable Monday puzzle: 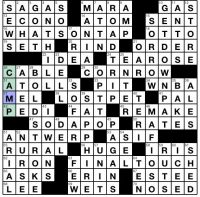 I’m a sucker for grids that feature theme entries along all four sides of the puzzle as well as in the center, and this one is certainly well-constructed with solid and in-the-language themers, a satisfying revealer, and very little crosswordese. It’s difficult to get super clean grids like these, much less ones with a bit of spice in the fill, but Burnikel makes it look easy. I really enjoyed TEAROSE, CORNROW, WNBA, ANTWERP, and MAFIOSO in the fill, and I can’t really think of many touch synonyms that were left out. My only pause is where we have DELL right over DEL in the grid.

#includemorewomen watch: Undeniably talented and wildly prolific female constructor? Check. Inclusion of an array of female-identified people in the fill and clues? Check! We’ve got Rooney and Kate MARA, the WNBA’s Minnesota Lynx, TERI Polo of “The Fosters”, and ESTEE Lauder. I could get used to this! #happypride 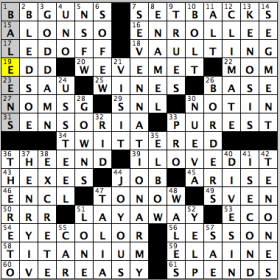 Good afternoon, everybody! Laura is currently down in the Crescent City hanging out with other hard-partying librarians and bibliophiles at a conference, so I’m (Ade) stepping in to review Brendan’s fun puzzle to start the week, one in which I got a foothold on solving early in the Northwest because of the sports-related clues that were contained it. I’m sure all of you are surprised, maybe even shocked, that those sports entries, like ALONSO (15A: [Formula One Racing star Fernando]) and LED OFF (17A: [Batted first]) were the first answers to go down as I solved. As I solved the Fernando Alonso entry, my mind drifted into thinking that the real dream job in sports is to be a Formula One driver; Not only is the fame and fortune part of the job, you get paid to drive a car for a team that, on average, spends about $300 million on the maintenance of said vehicle.

Here’s the keys to the half-a-billion-dollar Ferrari. Now don’t crash it, you hear?!

One clue threw me for a loop because I thought it was sports-related, but, clearly, HENRY IV does not have too much to do with English Premier League soccer (37D: [Hotspur’s rival]). I’m learning all about the characters from Frozen via crosswords, and today was the first time learning of SVEN‘s existence (49A: [He has a non-speaking role in “Frozen”]). There’s definitely a tinge of naughtiness and vulgarity in the grid, which I personally don’t mind too much. Specifically, I’m talking about NSFW, short for “not safe for work” (5D: [Email warning letters]), GOD DAMN (3D: [“Sheeeee-it!”]) and the clue to EXCRETE (38D: [Shit out]). I appreciated the trivia element to the clue to TITANIUM, which I did not know about until today (58A: [Element named after a Greek god]). My favorite entry in the grid, as I look it over once more, probably was the seldom-used SENSORIA (31A: [Things that touch, smell, and hear]). Unless you ask for it specifically, someone must not like you if you were given TEN ONES if you needed change for a $10 bill (42D: [Hamilton change]). Talk about having a serious bulge in your pants as a result!

“Sports will make you smarter” moment of the day: SEVEN NATION ARMY (7D: [Jock jam by the White Stripes]) – For those who have been watching the ongoing 2018 FIFA World Cup – and/or are fans of Penn State football – you’ll know that the teams, no matter which stadium in Russia, initially walk out to the field from the tunnel before the start of the game to the tune of unmistakable beginning riff to the Grammy Award-winning song SEVEN NATION ARMY, the 2003 tune performed by the Detroit-based band The White Stripes. I won’t embed the song underneath this graph, as you’ll get an earworm of epic proportions once you press play. You’re welcome.

It’s been fun! I hope you all have a wonderful rest of your Monday!