A shout-out to the cloud storage site for shared documents? Nuh-uh. Theme phrases that drop (as in “cut”) the word box? Wrong again. No, today’s elegantly executed theme features (by my count) two sets of themers: those that run horizontally (the main event) and those that run vertically (the gravy). The last word of the horizontals is the word BOX, which (literally) drops vertically from the letter “B” to create the end of four more “BOX” items. This is great wordplay that makes for a seriously entertaining solve. The puzz ain’t hurt none either with its particular complement of longer and mid-range non-theme fill—and astute cluing. And can you say “smooth solve”? The cluing, while lively throughout, is also on the easy side (imho…). And I suspect this is because the gimmick of turning a corner to complete the themer might not be quickly intuited by the less-experienced solvers out there. So this is a perfect way to introduce this construction option to n00bs: complex theme — more basic cluing. And no lack of imagination or enjoyment along the way.

So there’s this terrific, layered theme set which is then bolstered by any number of strong non-themers. And they’re strong sometimes in and of themselves, and sometimes because they’re clued in an evocative way or because they form connections/associations with yet other fill in the grid. Any tie-ins between WAX MUSEUM and GOVERNORS? Well, two that I can think of: Ronald Reagan and Arnold Schwarzenegger. Yes, the former is also a U.S. president and the latter an action star (and it’s with these achievements that they’re classified at Madame Tussaud’s), but each was also the main man in Sacramento at some point in his career.

I am a fan of SIDEWAYS and love that the clue brings [2004 film in which Paul Giamatti’s character says, “I am not drinking any @#$%! merlot!”] to puzzledom. Now, [“You can LEAD A horse to …”] (you know…), but if it’s an ARABIAN, perhaps it’ll LEAD you there first. Speedily. And the geographic features allegedly created by Paul Bunyan’s ox, Blue, get a double shout-out with ONTARIO [Easternmost Great Lake] and TOLEDO [Ohio port city], since the port-in-question here is located on Lake Erie. NINEFOLD [Like an increase from 2 to 18] may look like an odd entry, but X-FOLD has a long history in puzzleworld. Another “must mention” would also be that pairing of [One that’s attracted to refrigerators?] and MAGNET. Because BUDDING APPLIANCE SALESPERSON was never gonna fit.

Other tie-ins are to be found in ÉTUDE [Chopin piece] and PIANO [Franz liszt’s instrument], since those ÉTUDEs were written for PIANO; and AOL [MSN rival] and AOL catchphrase “You’ve got mail,” later used as a movie title by [“You’ve Got Mail” director Ephron] NORA. These are crossword glue (and not dreaded “gluey bits”). They help everything cohere and give the grid a greater integrity (see “gaming platforms” above, too).

The clue that made me raise an eyebrow: [Boo-boo, in babytalk] for OWIE. Boo-boo isn’t babytalk? ;-)

And with that, dear readers, I come to the end not only of this post, but to my regular Crossword Nation and Fiend gig. First of all: what a great puzzle to go out on, no? This is an example of Liz at her best: the puzz is imaginative and interesting. Great wordplay; great puzzle execution; great entertainment for newbies and seasoned solvers alike. Today’s post marks the end of my fifth year of blogging XWord Nation, and my ninth for team Fiend—which seems like a healthy time to step down. And I couldn’t be happier to tell you that I’ll be passing the metaphorical baton to none other than Fiend fave, crossword-lover and naturally warm and upbeat writer Ade Koiki. When Ade (enthusiastically) agreed to step in, I experienced a genuine feeling of delight. This just seems like a great fit and I think all of you who solve this puzzle will swiftly see why. So… on we go! Thanks for stopping by all these years. Keep doing so and… keep solving!! Peace out, y’all! xoxo, j. 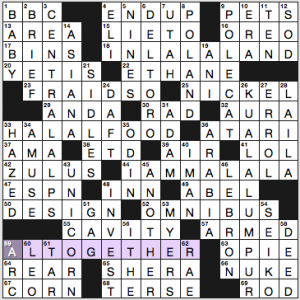 Zhouqin’s revealer is 59a. [On the whole … or, when read in two parts, what the answer to each starred clue has], ALTOGETHER, and each of the five themers contains the letter combo of AL/AL.

Four stars from me. A good Tuesday puzzle.

63a is clued [With 64-Across, chanced upon, and this puzzle’s theme] with the answer RAN / ACROSS. The trigram RAN appears in each theme answer, and, taken as a whole, moves ACROSS (and Down) the grid. 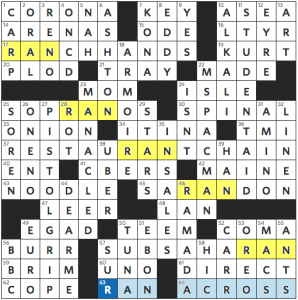 RAN ACROSS is not exactly a compelling phrase on which to base a puzzle, plus there’s the fact that RAN is going Down as much as ACROSS. Thusly, the theme didn’t thrill me. Much better was the MOVING VAN grid from almost a year ago in which the theme revealer doubled as the final theme entry. And even better than that was THE DESCENT OF MAN puzzle from 2014 which was just about perfect.

But back to this puzzle. CORONA is a nice way to start of a grid, eh? Too bad there’s no SLICE OF LIME to go with it. We do get STUDENT AID, (hmm, how come we’ve never seen FAFSA in a grid?), PISTOL GRIP (referring to power drills in the clue), ARMOIRE, MANACLED, IN SALES, “DEAR ME,” and my favorite entry, MS. PAC-MAN.

In summary, nice theme answers, but the theme itself left me flat. 3.3 stars. 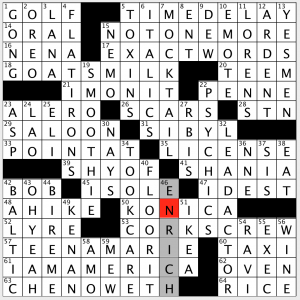 This looks like a themeless that could appear anywhere. The fill is clean, the word count is 70, and the entries are lively. In usual Jonesin’ fashion, this one was fun to solve.

The flavortext here states “a freestyle puzzle with something to say.” What does this puzzle have to say? There are a few entries, most notably 15A [2014 hashtag campaign against gun violence] NOT ONE MORE that are a commentary against weapons violence, and also perhaps a response to the somewhat lukewarm reception to the NYT on 6/19/18 which had guns as the theme. We are likely to always see UZI in puzzles; in today’s climate, perhaps an entire THEME devoted to weapons may not be the best choice. I personally didn’t have an issue with the TRIGGER WARNING puzzle, but I can understand why it may rub someone the wrong way. I say “Well said!” to Matt, although the entry POINT AT at 33A could also have a shooting connotation. (The clue doesn’t “indicate” that at all!) All in all still a fun puzzle, and a fine anti-gun stance. 4.8 stars.

Some notables, including some of those other “thematic” entries: 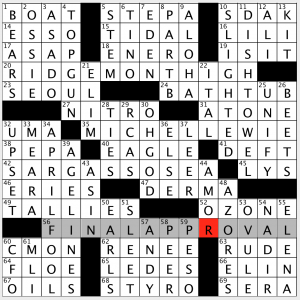 I am not familiar with Mike Peluso as a constructor, but unlike other times when I am unfamiliar with the puzzle maker, I jammed through this one quickly. It actually took me a minute after the puzzle was done to understand the theme:

We are dealing with homophones here, specifically the homophones for the word yes in Japanese (hai), French (oui), and Spanish (si). A clever theme, although maybe a little complicated for a Tuesday. It took me a minute, but that isn’t saying much (!). The difficulty level is still fairly easy, and that is what counts this early in the week. 4.3 stars today.