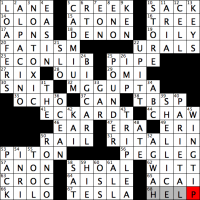 hello and welcome to episode #525 of matt gaffney’s weekly crossword contest, “Change Your Tune”. for this week 4 puzzle of guest constructor month, we have Peter Washington, pgw on the leaderboard, who challenges us with these instructions One of this puzzle’s clues needs to be rewritten to complete the metapuzzle’s theme. Which is it, and what is a suitable rewrite? okay. well, what are the theme entries?

actually, let’s back up a bit. i had a great deal of difficulty filling the crossword at all, and when i stopped the clock with the grid filled, i had two wrong letters. at 1-down, for {Lazy people} i had LOLLERS instead of LOAFERS. i’ve certainly never heard of the initialism {IDs on property tax bills} APNS at 17a, nor {Soft bigotry?} FATISM. apparently that’s pronounced with a short A sound, as in fat-shaming, not fate-ism. honestly, i felt a little lucky to only have two errors, as the grid was absolutely stuffed with entries i’d never heard of, many of them crossing each other. i’ll mention OLOA, ECONLIB, DENON, EASIN’, MG GUPTA, ECKARDT, ERI, AGWAH, and SHELL ICE as falling into this category. i also frowned at UPITT (only ever heard them referred to as PITT; their website is at pitt.edu and the first line of the wikipedia article says “commonly referred to as pitt”), and both OMI and chris RIX rang only the faintest of bells. what i’m saying is, the crossword was tough.

anyway, when i went to google the crossings for LOLLERS and realized it was LOAFERS, the penny dropped (so to speak), because i realized that it must be relevant that LOAFERS is a men’s shoe style, symmetrically opposite to WINGTIP clued as {Men’s shoe style}. however, i didn’t see where to progress from there. 63a CROC is also a shoe, although it’s a brand rather than a style, and it’s not especially for men.

when i came back to the puzzle later on friday afternoon, the other shoe/penny dropped, because i took another look at 25d POUNDER, clued as {Tenderizer}. during the solve i had noted to myself that {Quarter-___} would have been a better clue, and that’s when i realized that it was symmetrically opposite to 24d {Whopper competitor} BIG CARL (from carl’s jr, a chain i only know from my california days). that was my second big aha. the third was that not just LOAFERS but PENNY LOAFERS was the relevant men’s shoe style.

the ahas kept on coming. PENNY goes with the clue at 1-down, and QUARTER at 25-down. what about NICKEL and DIME? yup, there they are at 5d and 10d: {Brilliant shade of yellow} CADMIUM (not a definition i knew for that word!) can become NICKEL CADMIUM to match the symmetrically opposite clue, {Battery type} TRIPLE-A. and {Put away} STORE at 10d can become DIME STORE to match {Seller of low-cost novelty goods} RONCO.

that’s a lot of ahas! but i still didn’t know the meta answer, because it looked like the theme was already complete, so how were we supposed to complete it? were we looking for the half-dollar at 50? no, 50d is in fact RONCO itself, so there’s no way to go back to its symmetric partner STORE and stick half-dollar in front of it.

what about the title? we’d already used “change”, certainly, in noticing that the key words to add were all names of coins. but tune? i didn’t see what that was doing…

but what about 1a? {Coach Kiffin} LANE can become PENNY LANE, certainly, but that doesn’t match 68a {Assist} HELP… unless you rewrite the clue to be something like {Beatles song}. that’s the answer to the meta, and that’s changing your tune indeed.

on the other hand, the result is that the grid itself was stuffed with entries i consider undesirable. i won’t list them again, but there were definitely enough that just filling in the grid was a major challenge. and not the good kind, either—the “i don’t know either of these crossing answers, which letter looks plausible here?” kind. i’m inclined to mostly give the shaky fill a pass, because the meta was so good and peter is a beginning constructor (matt says this is his first published crossword, which, wow).

This entry was posted in Contests and tagged Peter Washington. Bookmark the permalink.