No WSJ puzzle due to the holiday. Happy 4th to all those who celebrate!

This is not a particularly difficult puzzle; it seems well-pitched for a Wednesday. The theme didn’t mean anything to me until I’d completed the puzzle and went back to sort it out. It’s a timely one. Each theme answer has a word in brackets that seems unrelated. 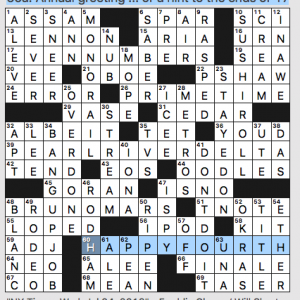 What I didn’t know before I did this puzzle: see above re: the PEARL RIVER DELTA. Anyone who has played me in Learned League is well aware that geography is not my best thing. 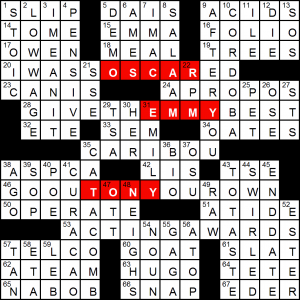 Today features an unusually cryptic theme presentation for the LA Times. Normally, when a set of variable strings are hidden in words, circles or similar are used. I guess the hidden strings were long enough that circles looked ugly. I prefer this subtler approach, though I understand why the LA Times usually opts to hit you over the head with the theme. Anyway, today’s theme phrases contain 3/4 of an EGOT, lacking the non-acting GRAMMY (which is a challenge to hide as well). The phrasing was creative in order to accomodate those large strings of letters I alluded to earlier. Nevertheless, they just stayed within the bounds of naturalness making for a pleasing set: IWASS(OSCAR)ED, GIVETH(EMMY)BEST and GOOU(TONY)OUROWN.

I admire the design of the grid: 12/14/14/12 is not easy to design around, as the 12s have to go in the fourth row, which cramps the grid. The design is more segmented than usual, but this allowed the constructor to deal with the more difficult stacks, especially the top-left and bottom-right which have overlapping themers. There are even grace notes like CURACAO, CATACOMB and AFTERYOU included. 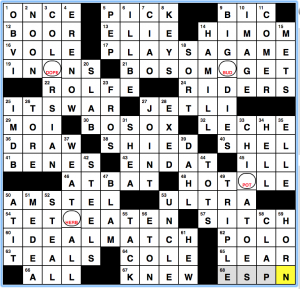 Happy Fourth of July, everyone!  I celebrated by solving this one on paper and promptly forgetting to write it up until July 5th!  Sorry about that.  We’re here, and it’s now, so let’s look at the latest from Paolo Pasco, “Turning Green”:

We’ve got four circled/shaded squares in the grid, and they’re weird squares, if their highlighted nature wasn’t a clue to that sort of thing, with each of them containing a slang term for weed and acting as a JOINT (as hinted at by 27D) that twists the clues running through it 90 degrees:

This was a really well-executed theme, and it took me a while to figure out why things like TETHERBALL, clearly the only sport fitting the clue for 54A, didn’t fit in the grid as written.  This was full of great AHA moments like that, and the rest of the fill matched it.  Hopefully you had a great Fourth and liked this puzzle, too.