This week’s Fireball is a contest. Look for the review on Sunday after the submission deadline. 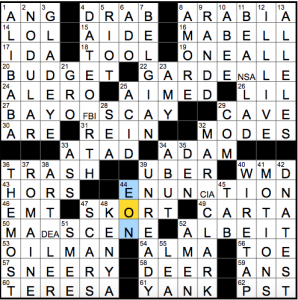 It’s a rebus Thursday! This one’s revealed at 40d, WIRETAP [What the four undercover orgs. in this puzzle might do]. And indeed, there are four three-letter wiretapping organizations in rebus squares throughout the grid:

Eight lively phrases! No demerits for having a few entries where the TLA doesn’t span two words, since that would’ve been roughly impossible for CIA.

I have to say that I didn’t love the theme, or maybe I didn’t love the revealer. Four secretive US organizations in rebus squares is a nice jumping off point, but WIRETAP as the revealer left me a little cold. I don’t think a revealer was even necessary here, but if you had to include one, maybe… UNDERCOVER? You could argue that these orgs. are skulking around the grid where you don’t expect them, I guess.

What bothered me more was that Joel Fagliano did a much better puzzle based on this concept last year. They’re not the same puzzle, but they have the same creative jumping-off point (How can I make a crossword about secret organizations being secret?), and they both hide NSA, CIA, and FBI. I liked this puzzle just fine, but WIRETAP pales in comparison to Joel’s aha moment. (And before Joel, Joanne Sullivan treaded this ground in 2015 in the Chronicle of Higher Education!)

Overall, the fill was fine. I liked ALI BABA, I’LL LIVE, THE MOST, MA BELL, SKORT, and the aforementioned theme entries. GLAD EYE was new to me (and Wiktionary thinks it’s more a seductive glance than a pleasant one). A BEE, NODULAR, SNEERY, and a few of the short entries gave me pause, but there wasn’t anything unreasonable.

A couple of fun clues for short entries:

And a clue that I’m still confused about:

Bs and Bs are added to well-known two-word phrases. 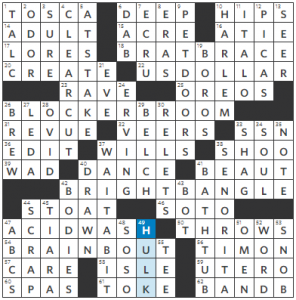 Cute theme with solid entries.  It’s a lot harder to find two-word phrases in which you can modify both words the same way, so I am much more appreciative of the effort that went into this. Go ahead, give it a try. We’ll wait.

To pull this off so smoothly shows there’s an expert hand behind it. And the fill bears that out with WAIT A BIT, ACID WASH, U.S. DOLLAR, SEÑORITA, BATHTUB, CLEAR-CUT, AT STAKE, and PET DOORS. (I love the clue for this last one [Domestic flaps], but I admit it made me nervous for a second.)

An enjoyable theme that works, tons of beauteous fill, and clever cluing. What’s not to like? Four stars from me. 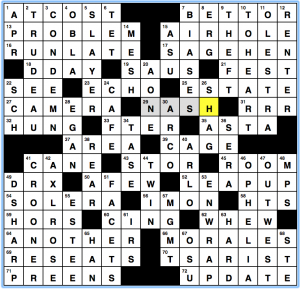 Today’s BEQ Thursday puzzle felt a little off to me.  There’s some cool stuff going on in the grid, but the rest of the grid left me a little disappointed.  Let’s start with the cool stuff, though:

The revealer on this one, UPDATE (72A, “Computer download … and a hint to this puzzle’s theme”) spells everything out.  Each of the theme entries is broken into two pieces, with the entry above it helping to bridge the gaps (and explaining to cool pattern of black squares in the center).

The AGEs in SAGE HEN and CAGE and ERAs in CAMERA and SOLERA help bridge the gaps nicely.  Justify is a racehorse that just won the Triple Crown.

There was plenty of fill that irked me on this one: RRR, DR X (which felt a bit on the obscure side, comics-wise – feel free to correct me if I’m wrong on this), HTS, APR clued as “Patriot’s Day month” (since AFAIK, Patriot’s Day is just a Boston area thing?), OB-LA (as in “OB-LA-Di, OB-LA-Da”), ASU, OSU, and the use of both to clue SCH, ARCO, MPS, etc.  A lot of small fill that this theme may have needed to work, but which felt irritating as far as my solve went. 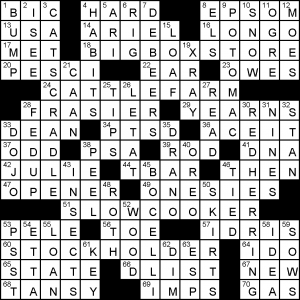 This one of those themes I only “got” after the fact. Nevertheless, a very clever and satifying category theme. Here, each theme answer is a STOCKHOLDER – a HOLDER of one of several different varieties of STOCK. A BIGBOXSTORE has stock as in merchandise; a CATTLEFARM has stock on the hoof; and a SLOWCOOKER has stock as in seasoned water. Very imaginative theme concept and execution!