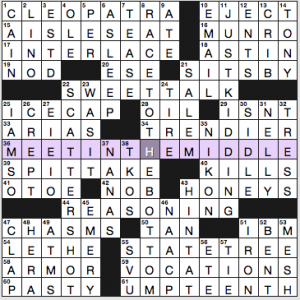 I do enjoy Robyn’s themelesses—though I barely had time to absorb the vibe since this one fell lightning-fast (for me—we won’t discuss Agardian solving times here). I did notice the cool mini-theme: MEET IN THE MIDDLE runs across the middle, and RACE TO THE BOTTOM crosses is in the Down direction. To include 29 thematic squares in a 70-worder and still nail smooth overall fill is impressive. 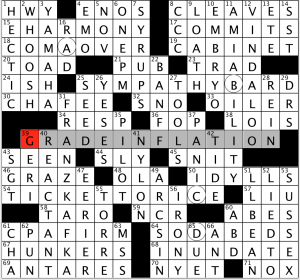 In each themer, the “grades” (i.e. the letters in the circled squares) have been turned up a notch — from B to A, from C to B, from D to C, and from F to D. Why is there no E? At some universities, there is no E grade; at others (like where I work), there is no F — and E is considered the failing grade. (The vanguard of educational progress that I attended, some years ago, still has no grades of D, E, or F — just A, B, C, or “No Credit” for us snowflakes.) There are interesting debates among college professors and administrators regarding grade inflation (as well as regarding whether it even exists); I’d like to link to some of those articles, but much of the non-crossword content in the Chronicle of Higher Education is subscriber-only. 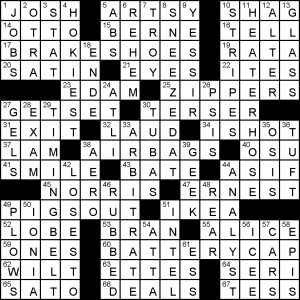 Short write-up: loved the theme, which is doohickeys in cars clued as though they were items of clothing. They make a lively set, with BRAKESHOES, HEATERHOSE, TIMINGBELT, AIRBAGS and a BATTERYCAP. That is a brilliant concept and execution.

Wish the puzzle was refined / edited more aggressively. With a pinwheel design, there shouldn’t be that much fill that is screaming “desperation”. ATLI would be fine as a single obscurity, but so many areas have nonce constructions of cruciverbal convenience: ITES, ISHOT, ETTES, OSIS, EPIS are truly bottom of the barrel.