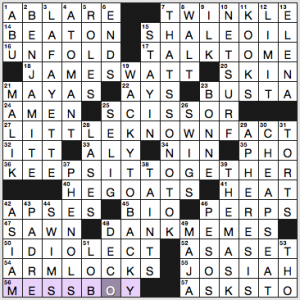 This one’s got some interesting long fill, but the overall vibe was one of awkward filler gluing everything together. First up: I liked TWINKLE, “TALK TO ME,” LITTLE-KNOWN FACT, KEEPS IT TOGETHER, the silly DANK MEMES (we store these in the dankest cellar we can find), IDIOLECT, LAFAYETTE, ATOM ANT (just now, I typed ADAM ANT first), and THE MASK. Oh, and WACKY TOBACKY … though I had to wait for the crossings to figure out how TOBACKY was being spelled.

In the debit column, we find 1-Across ABLARE (raise your hand if you’ve never said that a radio was ABLARE), the awkward BEAT ON/ASKS TO/AS A SET/STAY IN foursome, plural AYS atop singular SCISSOR (the latter is OK, but the contrast …), now-stodgy NETSURF, HE-GOATS (we call ’em billygoats), and really, most of the 3s.

Our theme is revealed at 127a with the clue [Record, or, read differently, a hint to this puzzle’s theme]. The answer is DISC or, re-parsed, D IS C. In the theme answers, (most) Ds get changed to Cs. Bonus points if you also re-parsed “Record” as “Re: C or D.” I don’t know if this was really intended, but it’s kind of a cool coincidence. 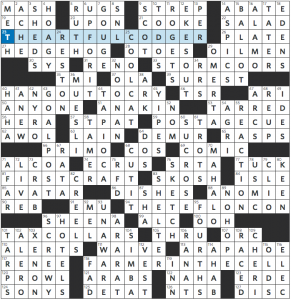 None of these struck my funny bone too hard though I did like the first one pretty well. The last one, too, is pretty good. I’d like to hear the rest of the song. Gives a whole new meaning to the line, “The farmer takes a wife.” Also, it would make a good entry for a set of fractured nursery rhyme songs. Other songs in the set might be “Mary Had a Little Scam” and “Little Bo {Bleep}.”

Highlights: COOL CAT, TAPIOCA, GOAL POST, MAHALO, ARAPAHOE, and HEDGEHOG. The clue for COOL CAT threw me. I thought [Hipster] was a newish term, but it goes back to the 40s.

All in all, a pretty standard change-a-letter theme. Nothing really stands out as especially sparkly, and while there’s some rough fill, the crossings are fair enough. 3.2 stars from me.

I could close out with the NYRO song (as performed by The 5th Dimension in 1966), but I’ll just link to it. It’s pretty cheesy.

I’m going to opt to try to tickle your funny bone with the best known use of TAPIOCA. 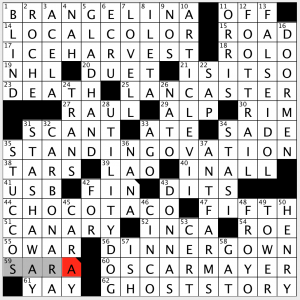 My friend Kyle Dolan has today’s LAT puzzle again this week. This is a clean 70-worder that played just a tad tougher than usual for me, although I don’t remember exactly trying to rush through this one. The conditions for a fast time have to be there, and with a 6-year-old here, they aren’t always there! My next project: noice cancelling headphones! I have had a cheap pair before, but not a nice pair, like Beats or Bose. Perhaps the slightly cheaper Sony or JBL versions might be the way to go. I will keep you posted!

And yes, there is a typo in the grid, and I am ashamed that I spelled Harry CARAY‘s name wrong! OK, I will instead say that I didn’t know the Bob Dylan song! 4.5 stars for Kyle’s Saturday challenge.

That is all for today. Next LAT writeup for me is Tuesday. 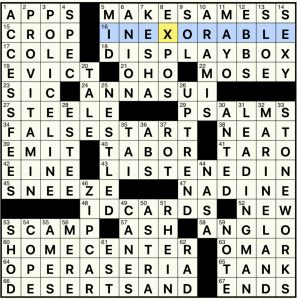 My elation after cruising through last week’s Stumper has been quickly quashed by the agony of this week. I shouldn’t say agony, since I knew I would crack it at some point, but this one took, let me see, FIVE TIMES as long as last week’s puzzle! We have a typical Longo Stumper this week. Difficult, but they always seem to look a lot easier once the grid is filled in. There is basically nothing in the grid that I am unfamiliar with, but the clues are so hard that I felt a little stupid at times. But sometimes these puzzles that are this difficult literally make me a little angry; this one was enjoyable. It is a beautiful morning here in northern Indiana today, and how nice to enjoy a puzzle on a nice morning. A solid 4.8 stars for this roughie.

I could go on, because there are so many good ones in this puzzle. Have a great weekend!