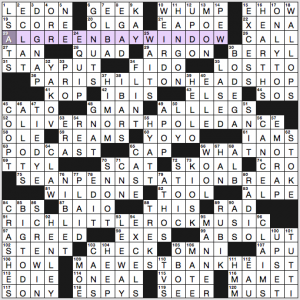 It took forever for me to see the theme because I had one wrong turn in a crossing for the first themer. 23a. [Singer / City / Home feature] clues a three-way “before & after,” AL GREEN BAY WINDOW, with Al Green morphing into Green Bay into a bay window. But actress KAT Graham came to mind for 9d. [___ Graham, Meryl Streep’s role in 2017’s “The Post”] instead of the correct KAY, so I had AL GREEN BAT WINDOW and was straight-up confused. (In my defense, I was in the sun for hours this afternoon. Brain might have melted a bit.) The rest of the themers:

Running into ECLAT and EAPOE and EHOW (“popular” in the clue!) in the top of the puzzle reduced the Scowl-o-Meter’s sensitivity level, so every other musty (MUST I!) bit of fill jumped out at me, too. I’ve now forgotten what, exactly, but I circled some things while solving and will eyeball those now. 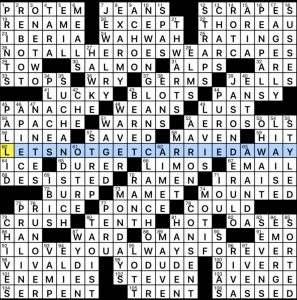 Themeless this week. Love all the 21s:

The problem with including songs in a grid is that they get stuck in at least some of the solvers’ heads. In case anyone doesn’t remember this tune, here’s the video. Please enjoy the 90s in all their splendor.

A couple other things:

There are a lot of great entries here, but since I have to go back to cleaning my house before a potential child care provider comes tomorrow for an interview, I’ll leave you to discuss your favorite bits. Until next time. 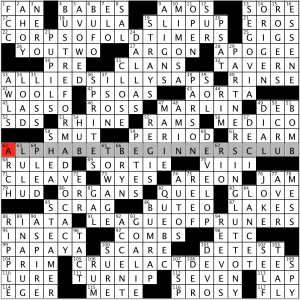 Words are clued as if they were acronyms for organizations or groups that do a thing that represents the word as if it were defined as what it is usually defined as. Get it?

Short post today since the heat wave has broken in the Northeast and we’re heading to a lake or beach or forest or a lake in that has a beach and is surrounded by forest. One fill note for those solvers not familiar with local Boston lingo:

This theme is more complex – and thus more satisfying – than I thought when I started the puzzle. When I got STEA to start 23a, [One who has blown a gasket, perhaps], I thought it had something to do with steam. Wrong all around. 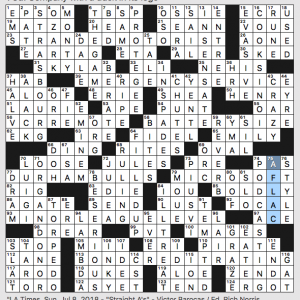 All solid entries and a nice concept I don’t remember seeing before (which doesn’t mean it hasn’t been done. I have a terrible memory for themes).

What I didn’t know before I did this puzzle: that there are 256 TBSPS in a gallon, and that OSSIE Davis appeared in Dr. Dolittle (the Eddie Murphy version, not the Rex Harrison original).