Peter asks, “What heavyweight boxing champion could have been a theme answer in this crossword?” 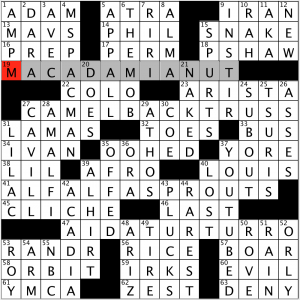 Let’s see … what can we do with these themers?

The puzzle’s title is “Half and Half” — so are we meant to split the themers in half? That doesn’t give us much. They don’t seem to be from any kind of category, meaning-wise — got a couple of food items, an engineering thing, and a person. I flailed around for a bit then asked my internet solving buddy Jeremy for the tiniest nudge (Internet Solving Buddies: Highly recommended!). Look at what the first parts and the second parts of each themer all share, he said.

Well, that was all it took: The first words in each themer — MACADAMIA, CAMELBACK, ALFALFA, AIDA — all have letters that come from the first half of the alphabet, while the second words in the themers — NUT, TRUSS, SPROUT, TURTURRO — have letters that come from the second half of the alphabet. Half and half, just as the title suggests.

So our heavyweight champion must be someone for whom all the letters of his first name come from the first half of the alphabet, and last name, second half, respectively. A brief foray into the List of Heavyweight Boxing Champions, and we have our answer: MIKE TYSON, who has had, needless to say, a storied career.

I wouldn’t say this is my favorite metapuzzle I’ve ever solved; would’ve liked, maybe, some other connection among the themers to tie them together or to make that “aha” moment a little more, I dunno, “aha”-moment-er. But does every puzzle have to be the best? Sometimes we just want our 15-30 minutes of distraction from the day, like brain exercise. Your thoughts?