This is a delightful Monday puzzle. The theme is fun and the fill is accessible. If you know someone who wants to start doing the NYT puzzle, this would be a good one to share with them.

We have an unusual workout regimen. 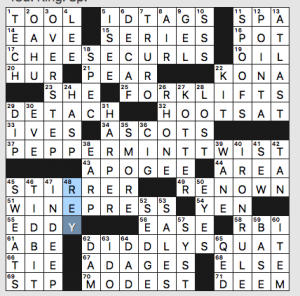 Solid, consistent, and funny theme on a Monday. I’ll take it.

The fill is free of mustiness as well. The partial [“Ben-___”] at 20a for HUR is a bit creaky but eminently gettable from crossings for younger solvers.

What I didn’t know before I did this puzzle: I got nothing. It’s Monday, so that’s probably a good thing.

Theme: Each two-word phrase starts with a word rhyming with “That’ll.” 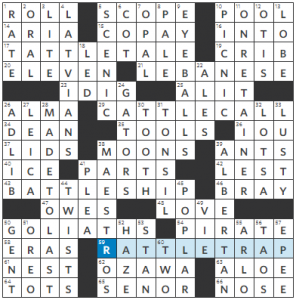 You don’t see a straight rhyming theme very often. My second published NYT grid was one, but it featured different spellings with each entry. Here, the entries all contain the same five-letter string with only a differing start. A very light theme, to be sure, but a good start to the week I suppose. Maybe this is one you show to your non-crosswording friends to try to get them interested.

Of course, I had to check to see if the starting letters spelled anything. …T…C…B…R. Drat. So close. Frozen yogurt sounds pretty good right about now. 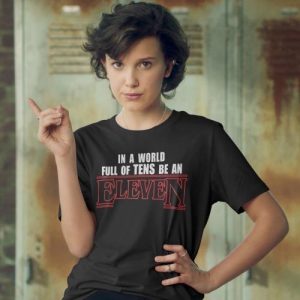 Highlights in the fill: MADE TO LAST (although “built to last” feels more common to me), EYEBALLS (though I could’ve done without the creepy clue [Checks out]), MAESTROS (with the fun clue [They know the score]), GOLIATHS, and the collection of worldly peoples in LEBANESE, LATVIANS, and one ALBERTAN. Also good: PIRATE, TONSIL, GATORS, PICNIC, TWISTS, and ELEVEN (though sadly, no “Stranger Things” reference).

Nothing much to gripe about fillwise, so let’s close this out. Though the fill is very nice and the theme is clean, I like something with just a little more meat on the bones, even on a Monday. Still, it makes for a really good grid for newbies. 3.3 stars from me.

The last theme entry made me think of Neil Gaiman’s short story “Click-Clack the Rattlebag.” If you’ve got 10 minutes to spare, give a listen to the author read his work. 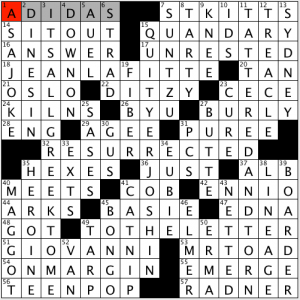 How many things? How about five?

It’s time for the Monday LAT! 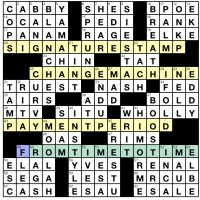 20a: SIGNATURE STAMP [Self-inking device for check endorsements]
25a: CHANGE MACHINE [Coins-for-bills device]
43a: PAYMENT PERIOD [Interval before late fees apply]
48a: FROM TIME TO TIME [On occasion … and how 20-, 25-, and 43-Across go?”

I have no clue what this puzzle’s theme is. My first thought, based on the revealer, was to find two time increments hidden in each themer (like eon, era, or sec) so that we’d be going from a time to another time. Nope. Maybe there are time-related words hidden in the themers? Not that I can find.

So, I texted the much-smarter-than-I-am goddesses Laura Braunstein and Amy Reynaldo, and both came up with the best plausible idea: each of the two words in the themers can be preceded by “time” – time signature, time stamp, etc. That’s honestly the best option and it seems to fit almost all of the themer words, but I’m not sure what a time payment is. Is that a thing? Also, if this is the theme, the revealer does not do a great job of communicating this at al. At all. Someone please tweet me (@naytnaytnayt) and tell us what we’re missing!

Random thoughts:
– Are ankle TATs super common? That sounds painful!
– The cluing of [Boyfriend’s ultimatum] for HIM OR ME doesn’t sit well with me. It also doesn’t account for bisexual or pansexual folks. How does this kind of stuff pass an editor’s breakfast test, while other anatomical fill doesn’t?
– Dodgy fill: ELKE, OAS, ESALE, ONKP

#includemorewomen: Are all ships SHES? Even in this modern era? Are there any boat people who can fill me in? I’m genuinely curious. As for the women represented, we have three I didn’t know, so I decided to a do a bit of research on their respective Wikipedia pages. Here are a few tidbits that stood out:

– ELKE Sommer is a German-born entertainer who became one of the top Hollywood film actresses of the 1960s and won a Golden Globe in 1964. She was also a regular feature on “The Dean Martin Show”, Bob Hope specials, and “Hollywood Squares”. Before my time, but she seemed big! 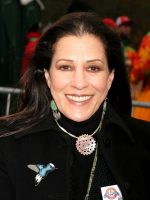 – Little NELL is the primary female protagonist of “The Old Curiosity Shop” by Charles Dickens. Apparently this work and others were so popular in the 1840s that people in New York “stormed the wharf when the ship bearing the final installment arrived in 1841.” Sounds like a Harry Potter release party to me! 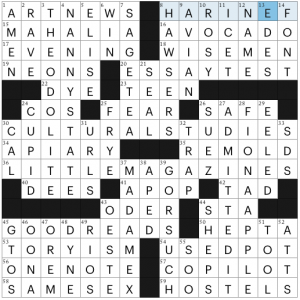 Okay, this one was tough, and I had two different squares where I was running through the vowels to find the right combo after using the “check grid” function. That crossing between transgender fashion model HARI NEF and tangential American Revolution figure Benjamin EDES (not remotely a common surname) killed me, and I figured it was something like HARINA F. That the H was confirmed only via nautical HAWSERS is also challenging.

Then there was semi-obscure surveying equipment THEODOLITE crossing COS with a clue that won’t at all resonate unless you shop at H&M a lot.

Going to the Art Institute Sargent exhibition this week—not sure if MADAME X has made it here or not. I don’t read ARTNEWS so I took a stab at ARTWEEK. Never heard of LITTLE MAGAZINES, either—filled that one in because I’d seen the blog comments before I solved the puzzle Monday night. [“Anatomy of Criticism” author] FRYE is entirely unknown to me. And [Dan Flavin works] for NEONS—really?

The rest of the puzzle was more pliable, though the ODER/OESTE crossing and cluing Spanish plural RIOS via the Balsas and Lerma rivers were also a bit much. (Apparently they are both in Mexico.) “Other than that, Mrs. Lincoln …”

The crossword had sort of a “we are all in the same Cultural Studies graduate program, aren’t we?” vibe. And no, we are not.

Three stars from me, at best. NANNY STATE, GOODREADS, FIONA APPLE, MAHALIA Jackson, GORSUCH, and MADAME X were all nice fill, but there was too much else offsetting it.