Great news for fans of vowelless crosswords! Peter Broda—one of the organizers of the terrific Indie 500 tournament)—is selling an 8-pack of brand-new vwllss pzzls. Or really, 7 puzzles for sale, plus a bonus sample puzzle you can solve for free at his “Made Without AEIOU” page. You can name your price—use PayPal to send Peter any non-zero amount of money and he’ll send you all 8 puzzles, in .pdf and .puz formats, with and without enumerations for the answers. I just breezed through puzzle 1 in not a whole lot longer than it takes me to do a Saturday NYT; puzzle 2 took me 9:13, or about double a Friday NYT. Peter’s clues are clear and on the long side, which helps you figure out the answers. His vowelless fill is pretty dang zippy, too. Amy recommends! 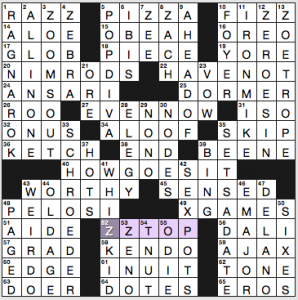 Another easy Friday NYT, another with a mini-theme. Here, the thematic angle is the double Z’s in the top row—RAZZ, PIZZA, and FIZZ—tied together with 52a. [Rock band whose name is suggested by the first row of this puzzle], ZZ TOP. Fact: The trio has those two guys with huge beards, and an unbearded guy whose name is Frank Beard.

Fill I liked: “HOW GOES IT?”, RAGNAROK, musical toon SCHROEDER, WHIZ KID, SETS A DATE, and interesting ZOETROPE, 13d. [Old-fashioned image projector]. Do you know that with the ZO*T in place, I very nearly entered ZOOT SUIT here? That would call for a question mark in the clue, though.

It’s after sunset and I haven’t gotten out for my daily Pokémon Go walk, so I’ll sign off now and leave you to discuss amongst yourselves. Four stars from me. 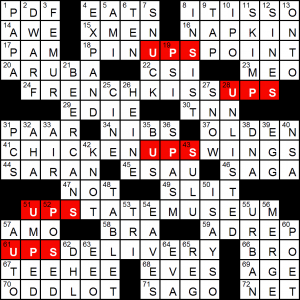 LA Times Fridays and letter-addition themes go together like strawberries and Wimbledon (Gratuitous mention since we have TWO South Aftrican finalists). Today is the trigram UPS, revealed in the final answer of UPSDELIVERY. Rival DHL is also included, but I can’t decided if that’s a bonus or a distraction. The S of UPS was always going to be a problem letter, but only once is it used to make a plural, and once to make a possessive. The other two UPS’s are at the beginning, so we get a nice variety and are kept on our toes. The full list is: PIN(UPS)POINT, FRENCHKISS(UPS), CHICKEN(UPS)WINGS and (UPS)TATEMUSEUM.

Like yesterday, this puzzle has five theme entries, and the central 15 and 2 13’s are definitely upping the challenge to fill a grid cleanly. And yet, unlike yesterday, this one isn’t out of control – the revealer being in the 13th not the 12th row is one factor, but I do admire the careful positioning of black squares to make the grid very well-balanced.

This entry was posted in Daily Puzzles and tagged Jim Quinlan, Trenton Charlson. Bookmark the permalink.