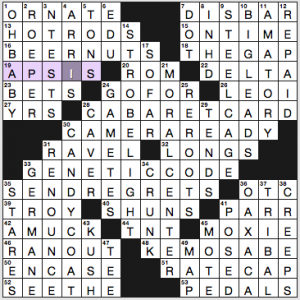 Oh! A Kam crossword, always welcome. (If you haven’t been doing the New Yorker themelesses on Mondays, you’ve missed some more of his gems—he comes up in the rotation every five weeks, I think.) A surprisingly quick Saturday solve, given the inclusion of some things I just plain did not know, two of which crossed. I blithely filled in APSES instead of APSIS for 19a. [Either of two extremes in an orbit], since ARRES looked vaguely plausible for the crossing, 4d. [“Mrs. ___ Goes to Paris” (Paul Gallico novel)], ARRIS. Apparently that’s ‘Arris, short for Harris, and Gallico also wrote the non-rhyming Mrs. ‘Arris Goes to New York, which disappoints me because I’d hoped he had a whole series of name/city rhymes.

FYI, the plural of APSIS is apsides. #TheMoreYouKnow

My other “Huh?” spot was the inferrable 28a. [City license once needed to work in an establishment serving alcohol], CABARET CARD. Never heard the term before.

Highlights: BEER NUTS, SEND REGRETS (Regrets? I’ve had a few—if you’re asking if some people have RSVPed no for my kid’s graduation party), Richard ROEPER in place of SISKEL, “OH, BABY,” GERMANE, CANDY-COAT, MORAL CENTER (I wanted it to be one letter longer, MORAL COMPASS), STEEL CAGE (for shark diving!), and the BIG LEADS you don’t want to blow. 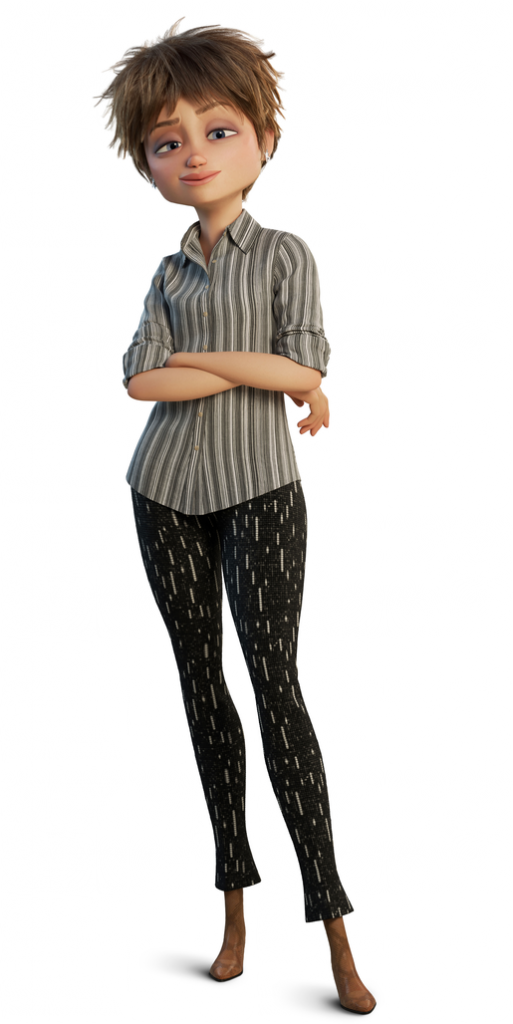 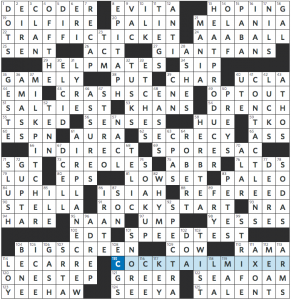 And I like the theme. It’s fun in a why-didn’t-I-think-of-that kind of way.

And I like how each entry is clued with respect to the production of the movie. That’s a nice point of consistency. For example, ROCKY START could’ve been clued regarding the content of the film — perhaps [Drinking raw eggs in the morning?]. While that may be a fun/gross-out kind of clue, it’s not consistent with the others. Or consider HEAT PRODUCER. A stronger base entry might be something like HEAT PUMP, HEAT EXHAUSTION, or HEAT SIGNATURE. But it would be harder to clue those with respect to film production.

That said, this approach results in a couple of blah base entries, specifically GIANT FANS and the aforementioned HEAT PRODUCER. The latter is passable, but GIANT FANS is not an in-the-language phrase I recognize.

Still, I’m thumbs-up on the theme. And considering there’s 12 of them, I’m impressed.

With all that theme, there isn’t much long non-theme fill. I’m looking at EPITAPH (with a great clue [Inscription that may contain “lies”]), SPORE SAC, CREOLES, REFEREED, and HERB TEA (which sounds odd to me, sans -AL).

I was ready to cry foul on two particular crossings, but once I realized how much theme there was, my mood softened. Still, 68d TELIC [Tending toward a definite goal] crossing LOW-SET [Short and stocky] strikes me as on the unfair side. The other one was 108d ECGS [Ticker tapes, for short] crossing GREER [“The Female Eunuch” writer]. I just now grokked the ECGS clue, and I like it, but crossing an acronym (with its ambiguous clue) with a proper name is also on the unfair side.

Okay, it’s Friday night as I write this, and I want to do Friday night things, like go to bed, so I shall bid you adieu. I’ll give this grid 3.5 stars. I like the theme, and there’s a lot of it, but some of the fill held it back. 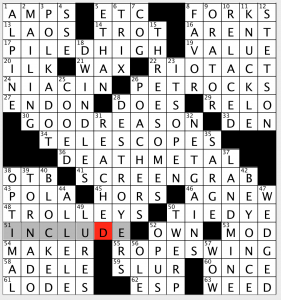 I subscribe to his weekly themeless puzzle, as I think I have mentioned on this blog before. He also experiments with alternate grid sizes, like the one we have today that is 16×15. It still checks in at 71 words, and the wide-open center no doubt helps in keeping the count low. The odd shape allows for four stacked 10s in the middle, but the feat here is this puzzle is actually pretty easy! Once I got a few answers in the upper left corner, everything seemed to click quite rapidly. I finished where the cursor is, and I admit I tried to finish in under 5 minutes once I saw how far I got in 4 minutes. But to make a wide-open puzzle that has virtually nothing difficult deserves kudos in my book. Andrew is also becoming a constructing force, and he is not to old either. If you like a challenge, subscribe to his offerings at ariespuzzles.com. And I need to buy his book! 4.6 stars today. 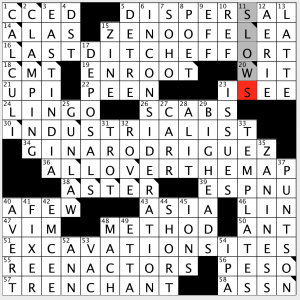 Here’s hoping that Erik is added to the regular rotation of Stumper constructors. There aren’t many, for several reasons, one of which I assume is payment, but that is not Stan’s fault. But Erik is one of my favorite constructors, and I cannot wait to see what he cranks out when he actually gets into his prime constructing age! I think I have mentioned his book before. Go buy it here!

Yes, I have several error marks in this grid, and I will discuss a few of these in the comments below. Suffice it to say I went down some extremely wrong paths. And there are some toughies in here that I’m not sure I know even after solving. Perhaps that is why this was submitted as a Stumper! But this is still a very low 64-word grid, and a wide-open construction feat. 4.5 stars from me.