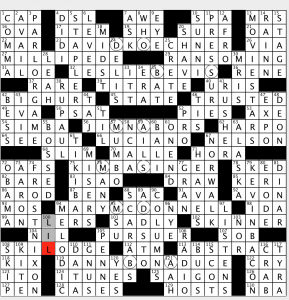 After last week’s break from themes, Evan is back with multi-layered puzzle that is remarkably impressive. There’s a lot going on here… much of which I didn’t fully grok until after I had completed the puzzle.

32a. [Commanderette Zircon’s portrayer in “Spaceballs” (she was in “The Lonely Guy” with Andy Garcia, who was in “The Air I Breathe” with 79 Down)] LESLIE BEVIS *See Evan’s commentary below on his decision to include Ms. Bevis

56a. [Actor who played Gomer Pyle (he was in “Cannonball Run II” with Burt Reynolds, who was in “Starting Over” with 79 Down)] JIM NABORS

75a. [Oscar winner for “L.A. Confidential” (she was in “The Natural” with Robert Duvall, who was in “Jayne Mansfield’s Car” with 79 Down)] KIM BASINGER

94a. [Oscar nominee for “Passion Fish” (she was in “Blue Chips” with Alfre Woodard, who was in “Beauty Shop” with 79 Down)] MARY MCDONNELL

119a. [Former child actor on “The Partridge Family” (he was in “The Jerk Theory” with Tom Arnold, who was in “We Married Margo” with 79 Down) DANNY BONADUCE

79d. [Actor whose name is spelled out by the letters between six degrees in this puzzle] KEVIN BACON. Had I read the full clue here when solving, I probably would’ve A) had a faster solve time and B) appreciated the theme with a great “Aha!” moment during the solve.

3d. [Activity such as the one hinted at by this puzzle’s theme] PARLOR GAME

74d. [Historical drama in which 79 Down played a post-presidential chief of staff] FROST/NIXON 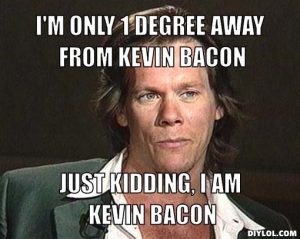 I don’t really know where to begin unpacking this puzzle. It’s so… tight. In a bunch of ways. Hoping I do it justice.

The left-right symmetry came about because it was tough to find a group of six actors and actresses whose names a) contained the degrees with the letters of KEVIN BACON between them, b) could be placed in normal symmetrical order, and c) were all reasonably well-known. I probably didn’t fully succeed on that last one since I wouldn’t call Leslie Bevis a household name, and there may have been a different set where normal symmetry was possible. But that’s the set I found, so I tried to cross the names as fairly as I could.

Often, when I don’t fully understand a theme until after I’ve solved a puzzle, I’m left feeling somewhat indifferent. That is definitely not the case here. This is admirable work. 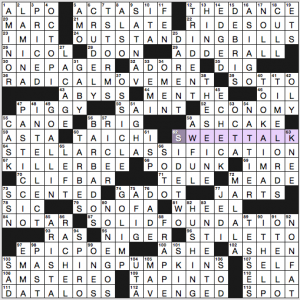 Sam and Byron have compiled a set of familiar phrases that can be reinterpreted as starting with a synonym of “Great!” or “Awesome!” that pairs with the ensuing noun to be praise:

Cute theme, except for the middle one.

I was bugged by some awkward phrasal answers while I solved. To wit: ACT AS IF, THE SEINE (needless inclusion of THE), NO TAR, TOOK AIM AT (less bad than the others), and SO TO clued as 66d. [Words said before bed?], to trick solvers into filling in GO TO, but then disappointing us when we realize “SO TO bed” is more or less being presented as a unit of meaning. The phrase is “And so to bed,” gotta have that and. (Just clue it as a fill-in-the-blank if you don’t want to use MLB player Geovany Soto, Congresswoman Cynthia Soto, or actress Talisa Soto.) DAREN’T also feels phrasal and awkward.

Did not know: 80d. [Worlds external to the mind], NON-EGOS, and 47d. [Musical medley], PASTICCIO, and also 60d. [French city where D’Artagnan lived in “The Three Musketeers”], TARBES. I’ll bet the CLIF BAR/TARBES crossing, or “SON OF A…” crossing that and NON-EGOS and partial A FIG, posed trouble for plenty of solvers. And CLIF BAR/PASTICCIO.

I was late to blogging tonight because (1) we went out to dinner at Lou Malnati’s, home of a unique sort of deep-dish pizza, (2) it took me two hours to walk home from dinner, and (3) I detoured over to Wrigley Field and caught the final Journey song, “Don’t Stop Believin’.” (They’re touring with Def Leppard and switch off with which band headlines. Tonight was a Def Leppard headlining night, which is good because if Journey had just started at 8:30, I might have stayed for an hour or two and this post would be even later. Here’s a decade-old live performance of the same song, featuring the current lead singer, Arnel Pineda. He’s the Filipino guy who the band found via his YouTube cover songs, and he sounded so much like Steve Perry, he joined Journey. 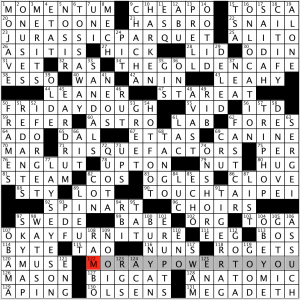 An ay sound is added to phrases to make new, wackier phrases. 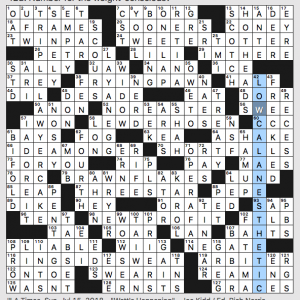 For your consideration today, we have an add-a-letter-theme: each theme answer has a “W” added to a common phrase. Wackiness results.

It is a lot of theme material, and the fill suffers somewhat as a result. ASHAKE? No. [Scot’s nots] in the clues not far away from SCOTCH as an answer? Nae. The suffix –ATOR? Nope. This didn’t ruin the puzzle for me because I really did enjoy the theme.

What I didn’t know before I did this puzzle: that Ben Nevis was a brand of SCOTCH as well as a mountain.