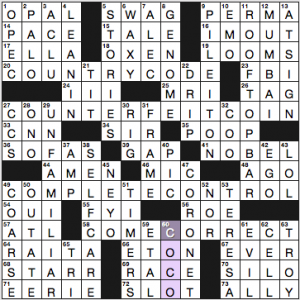 Simple and straightforward Monday theme. And can you believe I have yet to see Coco?!

Highlights: ROOFTOP BAR, SELF-CARE (mine involves walking around to look at flowers and catch Pokémon, and doing jigsaw puzzles), PILE IT ON.

I imagine that if I was someone touched by the trauma caused by a drunk driver, I would be completely turned off by this puzzle’s title which looks like an imperative. Those words are usually preceded by “Don’t.” Even though the puzzle has nothing to do with the subject, treating it with levity feels wrong.

The point of it though is to get us to the revealer CUPHOLDERS (58a [Places for drivers’ drinks, and literally what the starred answers are]).

My first inclination upon hitting the revealer was to look for some sort of embedded cup within each answer. But that’s a trickier theme than a Monday. This is much more straightforward; each theme entry is an object that holds some kind of cup. 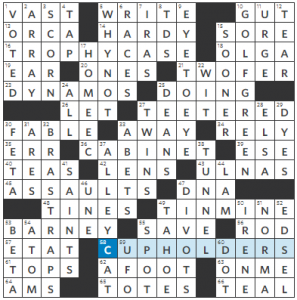 Yup, I suppose all that is true. This type of classification theme doesn’t excite me so much, but I suppose it makes a good entry point for newish solvers.

Fill is good with EYE-TO-EYE, ALLEY CAT, WHY NOT, HOME EC, and DYNAMOS. Not so keen on TIN MINE with its tough clue [Source of cassiterite], but it’s legit. 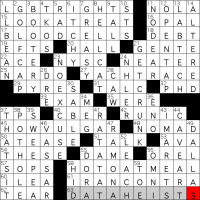 joon here with the new yorker write-up. kameron austin collins is back with a puzzle that’s exactly as good as you would expect. highlights: 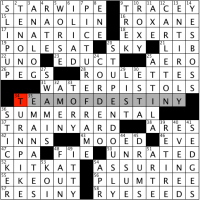 Woot! Time to grab some Froot Loops and boot scoot through this puzzle: 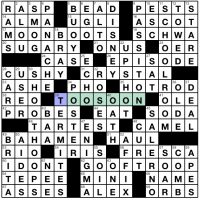 I really appreciate that (aside from regional pronunciation differences) each double OO sound is the same – that is the degree of theme consistency I appreciate, and I’m not surprised to see it from Neville.

Other random observations:
– I enjoyed the side-by-side clues of [Vietnamese soup] and [Souped-up vehicle]. That attention to detail always impresses me!
– I’m upset at how quickly I knew BAHA MEN just based on the song, “Who Let the Dogs Out?”

#includemorewomen: So, the only major ding against this puzzle is that there is not even one woman (!) referenced, directly or indirectly, in the fill or the cluing. Not one. IRIS and ALEX could have been directly clued as women, and much of the other fill could have been clued in the context of women. Imagine how much more welcoming an environment we could create in CrossWorld with the same grids, just by being more conscientious during cluing to make sure all types of people are actively represented!