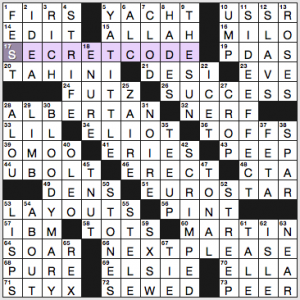 Ooh, a SECRET CODE! (17a. [What the answers to the six starred clues follow, as hinted at by 66-Across].) 66a is [Cry from behind a counter], “NEXT, PLEASE,” and the code is to shift each letter in the clued* answers to come up with the word you actually put into the grid. Here are the six coded answers, symmetrically located:

Lovely theme, and it’s the constructor’s crossword debut. The ETSY/FUTZ shift is a particularly nice find.

Highlights in the fill: BLOODY MARY, the implausibly named Y.A. TITTLE, SCRIMPED, the London paper THE SUN, SXSW, and STYX clued as [Band with the top 10 hits “Lady” and “Babe”]. Could do without PDAS, OLEO, ENURE, OMOO, STELE.

We have one more FB next week before the annual summer vacation, and it feels to me as if Peter is determined to go out with a bang. I liked this puzzle once I figured it out. That took a long time. Was this a very hard puzzle, or should I blame the sangria and the delicious belated birthday dinner?

The title holds the key to this one. We have four theme entries that appear to make no sense at all – until you look down. 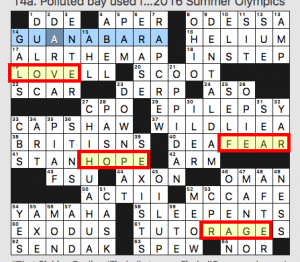 This is a great idea and a knotty construction challenge that suffers somewhat in the execution. SLEEPER AGENTS strikes me as a roll-your-own, and BRITISH OPENS shouldn’t be plural. I already mentioned TUTORAGES, and the fill also features the unfamiliar GUANABARA, archaic (if ever used) APER, OPPIDAN (completely new to me, and not in a good way), plural ELS for trains, and ex-Japanese PM ASO. On the plus side, at least ELS is clued without reference to Chicago.

What I didn’t know before I did this puzzle: that Shakespeare called EPILEPSY “the falling sickness.”

Not only is 29d WIN BY A NOSE the revealer, it also contains two words that participate in the theme. The clue is [Edge out, and a description of what appears four places in this puzzle]. Thus, we’re looking for the letter strings NOSE and WIN abutting each other. 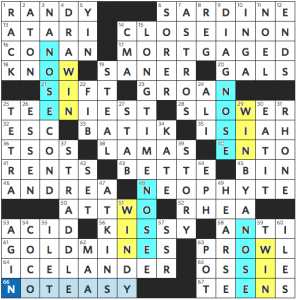 At first this struck me as an odd choice for a puzzle theme. I wasn’t sure that I cared that NOSE and WIN could be placed next to each other multiple times.

But the theme grew on me, especially with the long entries NANOSECOND and LONG TIME, NO SEE. I found those entries more interesting because 1) they’re long and 2) the letter string in question is embedded within other words. DIAGNOSE, WINDY, TWIN, and to a lesser extent DRAW IN, also work for that reason.

Contrarily, using the WIN and NOSE of WIN BY A NOSE as parts of two theme entries (not just as a revealer) feels a little bit like a cheat. I think I would prefer that phrase to be the puzzle’s title and then be treated to another two pairings in the grid.

I also would have found it more interesting if the two words in question were the same length. Having one shorter than the other feels odd.

The puzzle started off strongly. The first six entries are all enjoyable. But then I hit 20a, and huge red flags started waving. When you have [Women, patronizingly] as a clue, you are purposefully walking on thin ice. The answer turned out to be GALS which was tamer than what I feared. That word feels more regional to me than anything. My wife and her family are from Arkansas, so I’ve heard it around the South. In my mind’s ear, I hear both women and men using it. Cruciverb’s listing of clues tend to be centered around hoedowns or “Partners of guys.” I liked one offering from Paula Gamache in 2009: “Gas pump measures (abbr.).”

Other iffy entries: TSOS, ENTO, AT TWO, ILES, I LET, and SSR. But they’re contrasted with CLOSE IN ON, MORTGAGED, SARDINE, GOLD MINES, ICELANDER, NOT EASY, and NEOPHYTE.

In the end, I’m not really sure how I feel about this puzzle. I didn’t dislike it, but I feel like it missed some opportunities. I’ll put it at 3.4 stars. 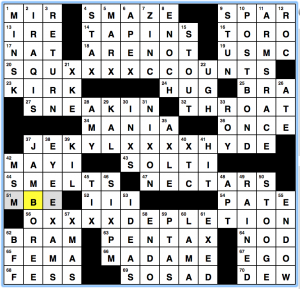 It’s BEQ Thursday time!  This week’s puzzle is called “Marking One’s Territory” and that tells you most of what you need to know with regards to its theme:

All of the territories in the theme clues have been X’d – there’s AREA in SQUARE ACCOUNTS, LAND in JEKYLL AND HYDE, and ZONE in OZONE DEPLETION.  It’s a pretty straightforward theme, but it’s executed well (given all the Xs that suddenly need crossings in the grid) and sometimes you want a straightforward puzzle anyways.

I’m doing office hours today in lieu of other grid thoughts – what fill did you like?  what did you dislike?  What didn’t you understand? 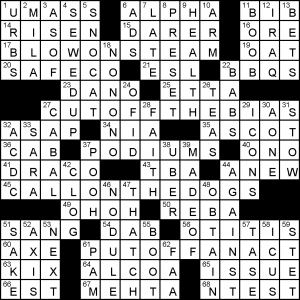 An interesting theme concept – a number of idioms swap off and on, radically changing their meaning. So we have: BLOW(ON/OFF)STEAM, CUT(ON/OFF)THEBIAS, CALL(OFF/ON)THEDOGS, PUT(ON/OFF)ANACT..