Congrats to Team Fiend’s Laura, who is the newest member of the American Values Club crossword collective! You can subscribe, buy individual puzzles, or find out how to get a free trial subscription here. 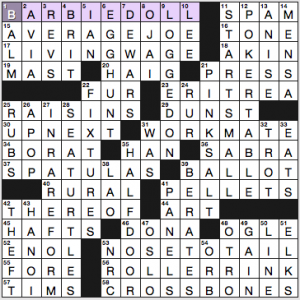 Sometimes I’ll grouse about seeing the same byline pretty soon after the last time that person had a puzzle in the same venue—but I was pleased to see another Robyn themeless two weeks after her prior Friday NYT (that one had a cute mini-theme). Plus, her byline is cool because the name Robyn Weintraub is “supervocalic”—it includes each vowel (including the Y, for a bonus) exactly once.

This puzzle won me over right away with the gimme at 1a. [Dreamhouse resident], BARBIE DOLL. My sister and I had the version that was a three-story dwelling with no stairs, just a string-operated elevator to get from one floor to another.

And then Robyn threw some things at me that were harder to suss out. I wasn’t familiar with the term 53a. [Like cooking that goes whole hog?], NOSE TO TAIL—eww. 45a [Sword grips], you never know if it’s HILTS or HAFTS till the crossings fill in. I didn’t know DEWARS scotch was a 7d. [Bacardi brand]. But most of the puzzle was more in my wheelhouse, and I liked it.

Four stars from me. The ENOL couldn’t overpower the BARBIE Dreamhouse vibe. 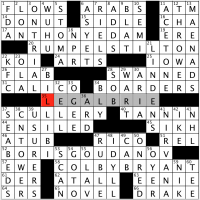 Cheesy jokes this week from the CHE:

Only one fill note today, since I’m full of cheesy goodness: 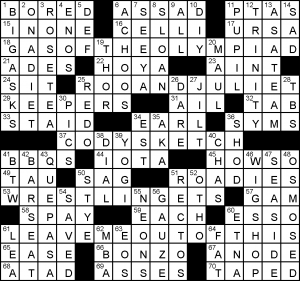 It’s funny, but it feels like for me that letter deletion themes are a lot harder to make “land” than letter addition ones. The answers just looked weird as I fill them in, so I solved around them. It doesn’t help that WRESTLING(ME)ETS really looks like it wants to be MATS. As the revealer, 16 letter LEAVEMEOUTOFTHIS, suggests, a ME has been subtracted from four theme answers. GA(ME)SOFTHEOLYMPIAD, RO(ME)OANDJULIET, CO(ME)DYSKETCH. Two of the new words made were names, which suggests this was difficult to make work.