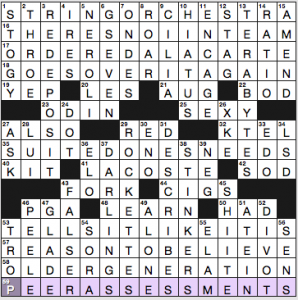 We’ve got two quad-stacks plus a central 15, in a grid with left/right symmetry. The predictable PEER ASSESSMENTS is parked in the bottom row, but the other 15s are fresher. STRING ORCHESTRA, “THERE’S NO ‘I’ IN TEAM,” OLDER GENERATION, past-tense ORDERED A LA CARTE and SUITED ONE’S NEEDS, present-tense TELLS IT LIKE IT IS. I’m lukewarm on GOES OVER IT AGAIN and REASON TO BELIEVE as crossword answers.

The stacks’ crossings are not at all dire! IRES, SORA, SENS, ELAM, ONDES—those aren’t assets but they didn’t wreck the puzzle for me. The middle’s LUI EDO XKE were similarly “meh.”

3.8 stars from me. Unlike in diving and gymnastics, I don’t award extra points for difficulty, so there’s no grading curve that favors quad-stacks.

Before we get started with today’s puzzle, I have to mention a note we received here at the Fiend from Mark Danna, assistant to Mike Shenk, editor of the WSJ puzzles. If you recall, we’ve debated in these pages the reasons why we see so many puzzles from the editor himself (under various pseudonyms, like today). The short answer is that they didn’t feel they had enough accepted puzzles that met their standards, and so Mr. Shenk needed to supplement these submissions with his own work. I will let Mr. Danna speak for himself:

The reasons for this are simple: we finally have enough accepted puzzles on hand to work with so that Mike doesn’t need to supplement them with his own work. This is the first time in the three years I have been handling the WSJ’s puzzle correspondence that we have arrived at this happy state. Mike and I would very much like these current conditions to continue. For that to happen, we need more high-quality submissions and queries to come our way.

Constructors might be pleased to learn that we generally respond to all correspondence within three weeks of receipt. Most accepted puzzles are published within two to three months of Mike’s giving them the thumbs-up. I send constructors a courtesy heads-up shortly before publication dates so that they know when their puzzles are slated to appear. Re rejected puzzles, we generally reply with detailed explanations of why we took a pass.

Submissions and queries by constructors should be addressed to wsjpuzzles@mikeshenk.com.

Feel free to pass this information along to your readers.—Best, Mark Danna, Assistant to Mike Shenk

So there you have it. Constructors, the ball is in your court.

And now back to our regularly scheduled program.

Our theme adds -ER to various phrases with pronunciation changes as necessary. 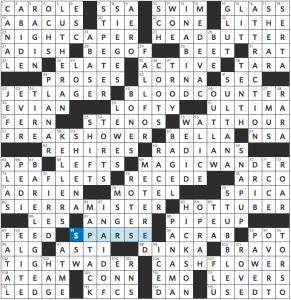 Fairly standard approach to an add-some-letters theme, but most of these worked pretty well. The changes in pronunciation were somewhat jarring, but not insurmountable.

What I’ll remember most from this grid, though, were some unusually tough crossings: 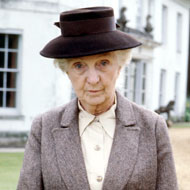 In the assets column, I like ST. PETER and LUTHERAN, MEDEVAC (though I spelled it MEDIVAC at first; I guess the middle letter starts “evacuation” as opposed to continuing “medical”), WATT-HOUR, BARE-LEGGED, and SULTANA [Yellow raisin]. What an imperious-sounding fruit that is, eh? You get the impression that it would not deign to be mixed into your trail mix.

I’m going to call it quits there. The theme isn’t groundbreaking, but it’s solidly presented. The fill is mostly nice but with some difficult crossings. I’ll put it around 3.4 stars.

That’s it for me. Time to go rub some HEAD BUTTER on my HOT TUBER. No, um, sorry. That doesn’t sound right… 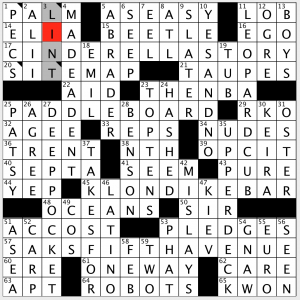 There have been a few LAT Saturday challenges that have played slightly tough for me in the past few weeks. This is another one of those. It is true, though that I don’t always solve these puzzles in “tournament mode,” which demands high focus and total quiet. But I think that even at a relaxed pace I can solve fairly quickly, and even though I do try to track my times for this blog, I think I now know why I don’t track ALL my solve times: This is still supposed to be fun! There is definitely a place for speed-solving, and that is a good barometer of how quick/talented you are, but I cannot do that all the time. It’s too much pressure! And I found this puzzle FUN, which is the point. Yes, a little bit of a challenge, but that is what we solvers want on the weekend! A solid 4.4 stars from me.

Still watching the Tour de France! Maybe I will go for a bike ride later today! 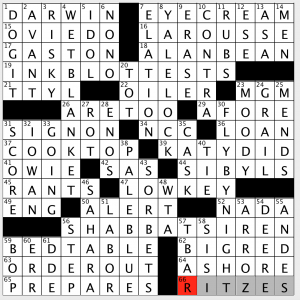 I had a true Stumper experience with this one. After a few fairly pleasant solving weeks, this one gave me that feeling of unease as I stared at a nearly blank grid for what seemed like an eternity. The lower left quadrant was the easiest, once I learned that, at 59A, a [Common clock setting] would be a BED TABLE. I don’t have a clock on mine, so maybe that is why I was confused! (I use a Fitbit with a silent alarm to wake up, but I am also old and I wake up early automatically!) I count 72 words in this toughie, which is another gem from Brad. 4.5 stars.