Sometimes, I get the WSJ meta immediately, and I’m super proud of myself — the grid is my oyster! Other times, the solving experience leads me to doubt my very existence and worth as a crossword blogger. This was the latter, only a week into taking over the WSJ contest slot from Dave.

Our title is “Marking Time,” and we’re told to look for a “famous fictional character” — hmm, not necessarily a literary character, so maybe a film or TV character? Or someone in a song or folklore? Let’s set that aside for now. Not much in the grid to suggest anything except this entry: [50a: Number of times it’s marking time (plus you could add a big one at the end]: SEVEN. But what is it? And in what way is it marking time? Is it marking the passage of time? Like the hands of a clock? Like sands through the hourglass, so are the days of our lives? Is there a famous fictional character who marked time seven times? Rip Van Winkle slept for twenty years, so it’s not that guy.

At this point, I took a break and solved Matt’s other grid, over at this week’s MGWCC. I figured I would give my lateral reasoning skills a little break. No luck there either.

So I fished for hints from my solving group (pro tip, folks — solving groups are a great source of meta-solving support, and you can meet some fun, cool people). My pal Conrad suggested looking for entries in the grid that would remain valid words should one letter be swapped. Here’s what I found: 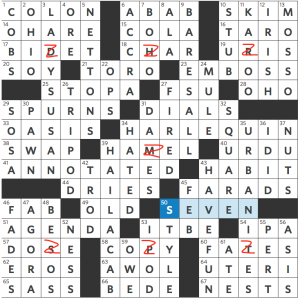 So, seven Zs, placed symmetrically. Zs can mark time as … sleeping? Back to Rip Van Winkle? That can’t be right. And the big one at the end … ohhhhhhhhhhhh. The replaced Zs in the grid are in the shape of a big Z. Whose “mark” is a big Z? This guy, a masked vigilante hero whose stories were set in Spanish California in the 1820s, and created in the 1920s by pulp writer Johnson McCulley: 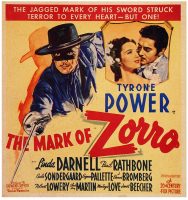 I have to say, the title really distracted me. I was looking for something specifically having to do with time, not marking. I wonder if the title will also throw other folks off the path? I have a little notebook where I keep solving notes for each metapuzzle; it goes back a few years. Sometimes the title fits the solution in such a lovely way, and sometimes it is the source of an overabundance of frustrating rabbit holes. Zorro is Spanish for fox; he could’ve helped hunt down some of those rabbits. Your thoughts?