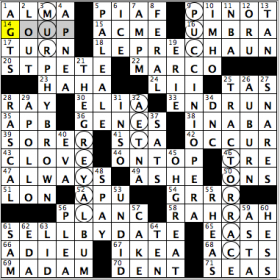 Hello, hello crossword fans! I hope you all have a wonderful start to your Tuesday!

Here is hoping that you have a sweet tooth because today’s crossword has a slick theme for those who love a certain savory food! There are five theme entries in the grid, all going down, that feature circles bunched consecutively within the entry and, when filled in, appear to make no sense when read from top to bottom. But, au contraire! When those letters in the circles are read from the bottom on up, they all form a word that is also a type of CAKE, which acts as the reveal (57D: [Upside-down ____ (bakery item that hints at the puzzle theme revealed by the circled letters)]).

There’s still about a month left until many college-bound students head to school, but I definitely felt like I was back in school when solving a few entries; Answers like ALMA (1A: [“____ Mater” (bronze sculpture on the Columbia University campus)]), SATS (37D: [Coll. entrance exams]), ORU (12D: [Tulsa sch. named after an evangelist]) and AUBURN all had me in the school spirit (26D: [Reddish-brown]). Props to Liz for putting in my favorite type of beer that I drink, a PALE ALE (5D: [Brewpub order]). I know that’s probably too bitter for most beer drinkers, but something about it definitely hits the spot with my tastebuds. Maybe I should have an IPA later on today while listening to some cabaret from PIAF on YouTube (5A: [Chanteuse Édith]). Loved the fill with the paralleling answers of LEPRECHAUN (18A: [Sprite featured on a St. Patrick’s Day card]) and SELL-BY DATE (61A: [Time-sensitive stamp on a food product]). So how many Rs is too many when GRRR is an entry in a crossword puzzle (54A: [Watchdog’s warning]). I’m guessing three is the threshold for now. The only entry that I was confused with when filling it in was PLAN C, which I had read/sounded it out as “planc” and thought it was French or Latin word (56A: [Third course?]). Thank goodness I snapped out of that faulty line of thinking quickly enough to not feel like a fool for that long.

The first Super Bowl that I have a working memory of seeing was Super Bowl XX, when the Chicago Bears crushed the New England Patriots and defensive end Richard DENT was named the game’s Most Valuable Player (70A: [Fender bender]). Speaking of Chicago sports, let’s end the blog with some more Windy City sports minutiae…

“Sports will make you smarter” moment of the day: ELIA (30A: [Director Kazan]) – From 1982 to 1983, former Major League Baseball player Lee ELIA was the manager of the Chicago Cubs, and, after a loss to the Los Angeles Dodgers in April of 1983 that dropped the team’s record to 5-14, Elia went on one of the more-famous postgame rants by any person in the history of sports. His vitriol was aimed at the Chicago Cubs fans who booed the team during the game. This was during a time when the Cubs exclusively played all of their home games during the day (the first night game at Wrigley Field did not take place until 1988), and that fact plays a big role in some of these now (in)famous comments! Here you go… (Warning: explicit/NSFW language…lots of it!)

Apologies for the salty language in the video above, especially for those who come on here during the morning and expect some easy listening/reading. But I do thank you for making it this far in reading today’s blog, and I hope you have a wonderful rest of your Tuesday. Oh, and as always, keep solving!! 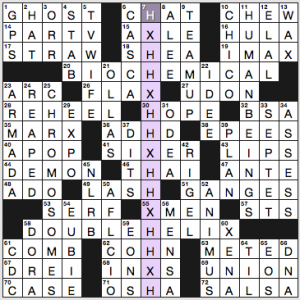 Whoa, whoa, whoa. This ain’t a Tuesday puzzle. Why is this running on a Tuesday? The theme is more of a Wednesday-to-Thursday level, and there’s too much hard fill and rampant cross-referencing to pass muster for Tuesday.

The 66d. [Subject of this puzzle] is DNA, and there’s the bland BIOCHEMICAL (20a. [What 7-Down is]), HUMAN BEINGS (11d. [Creatures with 23 pairs of 25-Down]—is it not weird to call us “creatures”?), CHROMOSOMES (25d. [Genetic bundles]), DOUBLE HELIX (58a. [Shape of 7-Down]), and then the clusterf*ck of 7d. [When the ends of each of its letters are connected to those above and below, a simplified schematic of a famous structure], a vertical HXHHXHHXHHXHHXH that needs you to mentally extend each H’s uprights to touch the X’s and the other H’s (and that needs a 22-word clue to explain itself).

With four 11s, a 15, and a 3, that’s a tight 62 theme squares clamping down on the grid. And so you have the initialism collision of NLRB AFL-CIO OSHA. The star RIGEL. Crosswordese ODEA, DITS, ALEE (that one’s so obscure, it isn’t accepted as an answer in the NYT’s Spelling Bee puzzle!), OLLAS, EL AL, and EOS.

Star rating: 2.5 Rigels. This puzzle stirred up some definite ANIMUS (52d. [Ill will]).

Move over, Farmers Only! We have a whole new crop of dating apps to try out: 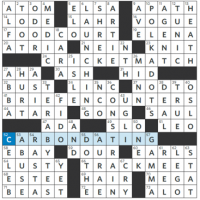 I generally enjoyed this theme, though I had a sense of deja vu while solving it. Haven’t we had a dating app pun theme somewhat recently? ::Searches via Fiend’s awesome search engine:: Yes, in fact, we did! Fogarty and Agard presented this Sunday puzzle just two months ago. Thankfully, there were no duplicate themers.

To fit in five themers, there was a bit of compromise in the fill, including APATH LAHR LINC DOTHE NCO AURAE ONEK MINN HEATH, but I did enjoy some of the longer downs like TERABYTES and POLKA DOTS (though I didn’t understand the [Spots on skirts] clue – it seemed a bit of a stretch to me). I also got messed up by VOGUE for [Prevailing fashion]. In fact, it took over a minute for just the full NE corner to click. Overall, an enjoyable solving experience and not too much groaning at puns!

#includemorewomen: Who do we have represented in the grid this week? We have ELSA, ESTEE Lauder, and Irene CARA, though I want to spend a minute with ELENA Kagan. She is only the 4th (!) and most recently-appointed female in the history of 113 (to date) people to serve as Supreme Court justices. In more than just that aspect, she has been a true trailblazer through much of her life. One anecdote I appreciated from her Wikipedia page: “[Kagan] had strong opinions about what a bat mitzvah should be like, which didn’t parallel the wishes of the rabbi … Elena Kagan felt very strongly that there should be ritual bat mitzvah in the synagogue, no less important than the ritual bar mitzvah.” Awesome! 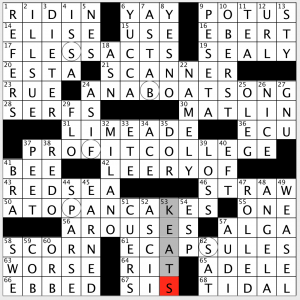 Is the theme Big Sean, the rapper? He had a hit with the same title, but that is not what is happening here! This theme IS, however, extremely clever. The seemingly nonsensical theme entries actually “fold” on themselves. Let me show you; read backwards from the red letter, then forwards again:

I told you it was clever! It took me a minute to figure out what was going on as I was solving. I thought I had made a mistake of some sort! I don’t have an official time for you; I forgot to make sure the timer in Across Lite was running. But my time was around 6 minutes or so, if I had to guess, since I was stumped a bit by what was happening. Extremely enjoyable solve; 4.7 stars for this week’s Jonesin’. 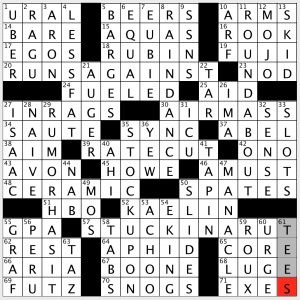 In typical LAT fashion, the theme is not readily evident in this puzzle until you get to the revealer at 57A. And if you’re like me, you go back through the puzzle and see if it works! (Yes, I am that OCD sometimes!)

OK, pretend the first four above have stars in front of them! They obviously do in the actual puzzle. Nice and neat for a Tuesday. Not too hard, and minimal crosswordese, although there is some. Sometimes it’s unavoidable, I suppose! 4.3 stars this week.

OK, so that was more than a couple. Have a great week!