It may be that I am worn out from college shopping and dealing with the emotions said shopping engendered, but this seemed a tad less Monday-ish in difficulty than I expected. I can usually finish a Monday from just the Across or Down clues. Not so today.

If this puzzle had a theme song, it would be this. Each theme answer ends with a unit of time, and the units get larger (longer?) as we go down the grid. 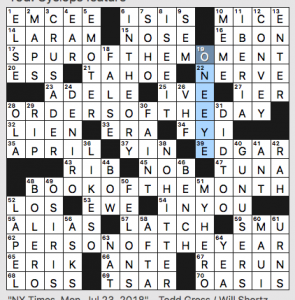 Nice construction with two 14s and two 15s. The theme is solid, straightforward without being boring, and was a pleasure to solve.

What I didn’t know before I did this puzzle: never heard of ORDERS OF THE DAY. 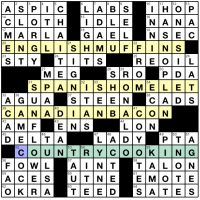 20a: ENGLISH MUFFINS [Toasted breakfast breads]
31a: SPANISH OMELET [Eggy breakfast dish]
39a: CANADIAN BACON [Ham-like breakfast meat]
52a: COUNTRY COOKING [Rural cuisine … and what 20-, 31-, and 39-Across are examplse of?]

What a cute theme! I enjoyed the revealer and was pleased with the breakfast food consistency of the theme throughout. Bonus points for how much this puzzle made me want to make an egg sandwich using these exact ingredients, but a few points might be subtracted by some folks for, ironically, how this grid might not pass everyone’s Sunday Morning Breakfast Test – we have TITS, GAMECOCK, and KAMA Sutra in the same grid. Oh, my!

While I loved the theme and was piqued by the aforementioned entries, I was not as excited about some of the rougher fill: ASPIC NSEC SRO AMF ENS LON ITAS. I Naticked at STEEN / SHEB and can imagine that some might also Natick at LYNNE / UTNE. Not ideal for a Monday puzzle. Also, I’ll keep being that guy to point this out: [Lord’s partner] is not always LADY. More often than not, sure, but not always.

#includemorewomen: This grid includes MARLA (blerg), LADY, Bess from PORGY and Bess, and AGNES de Mille. Bafflingly, MEG was clued as [One-thousandth of a gig] instead of as any famous woman named Meg. 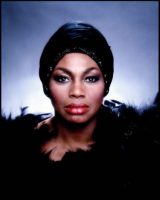 I don’t know much about Porgy and Bess, but I was excited to learn about the original portrayer of Bess, Leontyne Price. According to Wikipedia, she was “the first African American to become a leading artist at the Metropolitan Opera.” Trailblazer! Furthermore, “Price avoided the term African American, preferring to call herself an American, even a ‘chauvinistic American.’ She summed up her philosophy thus: ‘If you are going to think black, think positive about it. Don’t think down on it, or think it is something in your way. And this way, when you really do want to stretch out, and express how beautiful black is, everybody will hear you.'” And interesting perspective on identity and certainly powerful words!

I’m not sure that the Saturday WSJ puzzle gets as many solvers as the regular weekday puzzles, so you may have missed my post this weekend regarding some behind-the-scenes developments at the paper. If so, catch up on it here.

As for today’s grid, Zhouqin Burnikel is back with food products whose second word can also be associated with golfing. 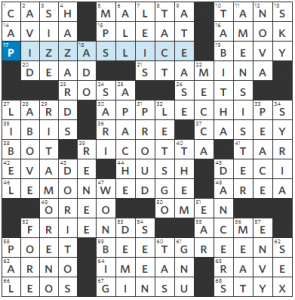 A solid set of theme answers. Even though I’m not familiar with BEET GREENS as something one would eat, it appears to be a thing.

What struck me most about the grid, was the feminine vibe in the non-theme fill. AMEN SISTER and RITA MORENO are in the marquee positions with supporting roles offered to TABITHA, ROSA, RENEE, DEMI Lovato, and POET Maya Angelou. I don’t recall a single male reference in the grid, which is just fine with me.

Other goodies: HAZARDS, RICOTTA, DORITOS, and DANCERS. And more: STAMINA, FRIENDS, “LET’S GO,” WON BIG, APACHE, and MECCA. That’s a whole lot of happy fill for your Monday morning. (And there’s a male reference: [Geronimo’s people] clues APACHE. Oops, there’s another one: CASEY at the bat.)

All this fun fill goes to show how smooth this Monday grid is and just how masterful ZB is at making such a grid. 3.6 stars from me. 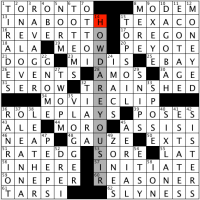 Five things (and a reminder that Boswords is in just over five days! Come to Boswords and meet BEQ — and me! and a few other Fiend-ers):

Patrick Berry’s turn! Something I always look forward to- and I suspect I’m not alone. 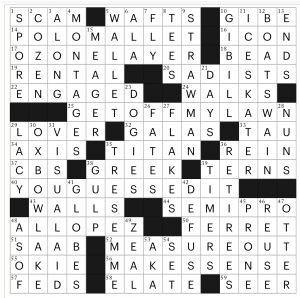 One thing that I always love about Patrick Berry puzzles- especially his themeless offerings- is that at a first pass through the clues, my grid looks pretty hopeless. I rarely enter anything with 100% confidence. But somehow, things always fall into place, and it’s a heck of a fun ride. I just have to tell myself “In Berry I Trust.” This puzzle was great, and I enjoyed it from start to finish.

At my first pass through the across clues, I hesitantly took a stab at just four entries: RENTAL [Budget offering], AXIS [Bisecting line], OKIE [Twentieth-century migrant], and FEDS [Mafiosi foes]. The downs didn’t give me much more, and I very tepidly typed in MEAGER [Barely sufficient]. And yet somehow, things just… came together. Rather quickly to boot! 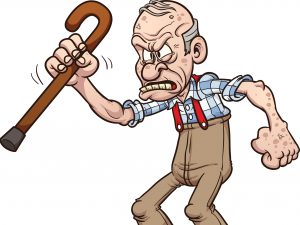 If this cartoon doesn’t scream “Get off my lawn!” I don’t know what does…

GET OFF MY LAWN is a great entry, especially as clued [Crank call?]. Am I the only one glared and said it audibly in a gravelly voice ala Clint Eastwood while I dropped it in?

YOU GUESSED IT [“Ding, ding, ding!] and MAKES SENSE [“I get what you’re saying”] were spot on as well.

No chance I was going to enter the obvious FLIES for [Travels by air]. I innately knew that would be way too simple an answer… but having FLY come down off the correct answer (WAFTS) seemed like a sly wink.

And while I’ve never heard of an OXBOW LAKE, or AL LOPEZ, and I couldn’t visualize BOATSWAIN with two apostrophes, they were easily inferable and fun to uncover.

11d. [Expert at figures, maybe] ICE SKATER. I was initially thinking along the lines of an actuary or a CPA or something of that ilk. ICE SKATER is way better. 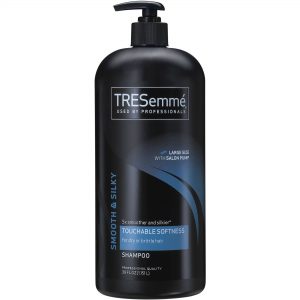 35d. [“Used by Professionals” hair-care brand] TRESEMME. There’s been gigantic bottle of this in my shower since my ex left it there 6 years ago, and I’m working my way through it one dab at a time (TMI? What can I say? I have short hair…), yet somehow I still had trouble remembering how to spell it…

39d. [Appliance conveniences] TIMERS. My mind read the clue as “Kitchen conveniences,” and ?I?ERS gave me DICERS, then RICERS, then LIMERS (?), and finally… TIMERS.

Looking over the puzzle, I don’t see a single entry that would cause even the slightest bit of side-eye. I guess POLO MALLET didn’t strike me (no pun intended) as all that interesting… but how could you ask for much more in a puzzle this well constructed?

Hard for me to call this anything less than a 5 star themeless.