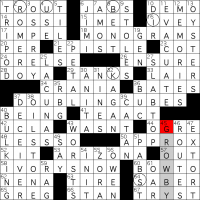 hello and welcome to episode #529 of matt gaffney’s weekly crossword contest, “Pick Six”. for this week 3 puzzle, matt challenges us to name a six-letter entry in the grid (you can submit either its clue number or the entry itself). okay. what are the theme answers? well, there’s only one pretty obvious theme answer, the long central across answer: {They come with backgammon sets} DOUBLING CUBES. if you don’t know what these are, they look like dice, but they’re not intended to be rolled—instead, they just have a number on each face, and whichever number is currently face-up indicates the current stakes. at points during the game, one player can propose to double the stakes, and the other player can either accept the higher stakes (in which case they turn the cube), or immediately forfeit and pay out the current stakes.

anyway, what does this have to do with the meta? well, the title is pick six, and we’re looking for a six-letter entry, and a cube has six faces. in particular, the six faces of a doubling cube are 2, 4, 8, 16, 32, and 64. circling the letters in the grid in those squares, we get RUBIKS, which is of course also a cube. and it’s six letters, but it can’t be the meta answer because it’s not a grid entry. to be extra-clear, matt included a parenthetical saying we could give either the entry itself or its clue number, and it definitely doesn’t have a clue number.

this is where i got stuck for two days. i went over the list of six-letter grid entries many times, trying to figure out what might be connected to a rubik’s cube. here’s the list:

none of these really have anything to do with a rubik’s cube, so i was a little stuck.

eventually i got myself unstuck by thinking along these lines: it doesn’t make sense to build a 15×15 grid so that you can put one 13-letter theme answer plus six other theme squares in various places. it doesn’t even make much sense to have a grid that size for all that plus one more six-letter theme entry somewhere. so what is the rest of the grid doing? it’s a reasonably clean grid, and at only 74 words it is likely that there’s not a *great* deal more theme content, but i figured there had to be some.

so, what and where is it? a reasonable place to look would be the next longest across entries, MONOGRAMS and IVORY SNOW.
MONOGRAMS suggests looking at initials. my first thought was the initials of erno rubik. maybe E.R. has something to do with how we can single out one of those six-letter entries? but this went nowhere.

well, what about the other one? IVORY SNOW is white, which is one of the colors on a standard rubik’s cube (the others being red, blue, orange, green, and yellow). perhaps we should be looking at the initial letters of those colors? quite suddenly, i had solved the meta: GROW BY is the only six-letter entry comprised by the initial letters of the six colors. it’s a strange entry as fill, but it makes sense for a meta answer. in some ways it’s surprising you can spell anything at all from a random collection of six letters.

i thought this was a curious meta, and a not entirely satisfying one. getting to RUBIK’S was easy, and the rest was quite hard because it felt underclued. IVORY SNOW just happens to be one of the colors, and MONOGRAMS really only refer to initials of a name (of a person, corporation, etc.). so those two hints both felt very imprecise, enough so to diminish the “click” upon finally hitting upon the right answer. it would have been more satisfying to have symmetrically opposite pairs of entries somehow representing the correct pairs of colors on opposite faces of a rubik’s cube (white/yellow, blue/green, red/orange), although i admit that mechanism does not exactly lend itself to an extraction.

well, that’s all i’ve got for this week. what did you think?