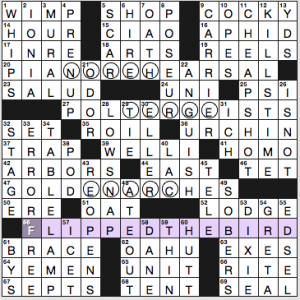 Oh, hey. I found the Tuesday puzzle. They ran it for Wednesday. Cute theme! The revealer is FLIPPED THE BIRD, 56a. [Gestured rudely … or what this puzzle’s circles have done?]. The other three themers contain bird names that have been flipped:

Fairly lively set of themers, super-zippy revealer. Moving along to the fill, there was plenty to like: CHEAP SHOT, KILLS TIME, COCKY, PRENUP, lots of easy/familiar stuff.

When a constructor goes for a pangram, it’s often unrelated to the theme and rarely leads to good fill. Here we have a grid that isn’t just incidentally going for the pangram, that’s the whole point of it. 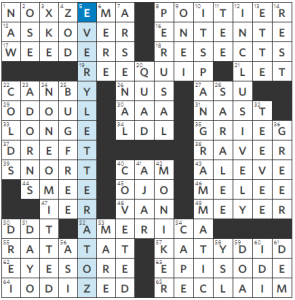 Despite that last entry, I feel like I’m missing something. Yes, I see the huge black H in the grid; it was the first thing I saw. And since there’s no H in the fill, this seemed appropriate.

But why? Why do this? Why H? Why not I or L or something else? What makes this crossword-worthy? I kept waiting for the punchline, but it never came. The last letter I filled in was the second N in NONE OMITTED, and it felt so anticlimactic. If indeed I’m missing the joke here, please let me know and I will re-evaluate. I may be slow on the uptake, but I can’t believe I’m the only one a little bit befuddled by this puzzle.

Maybe this is the thought process: Let’s say you don’t notice the giant H staring you in the face. I’m sure this happened. Then you get hit over the head with all the theme answers telling you repeatedly that every letter is included in the grid. You’re game, so you run through the alphabet, dutifully looking for each example. But wait, one’s missing. Where the heck is that gol-durned H? You search and search but can’t find it. In frustration, you begin to pen a letter to editor Mike Shenk claiming that you have triumphantly found an error in today’s puzzle. Just as you’re about to hit Send, a chance glance at the grid shows you the error of your ways and brings you crashing down to earth.

Okay, if this is you, that’s kind of funny. But if you saw the H before you even looked at a single clue, the joke is non-existent.

So I was left spluttering at the end. Further, I was bothered by the repetitive and unexciting nature of INCLUSIVELY and NONE OMITTED as theme answers. And the structure of the theme clues didn’t make sense to me either; I felt they should have blanks in place of the second ellipses, as in […in other words, there are ___] for NONE OMITTED.

This theme wasn’t for me, but how about the rest of it? The long fill (by which I mean the plethora of 7s) is really nice. It started off strong with NOXZEMA and POITIER. And then there’s BUG-FREE SARA LEE, AMERICA, RAT-A-TAT, EYESORE, IODIZED, ARSENAL, PERUSAL, COVETED, MONIKER, and KATYDID. Wow!

And that CANBY, O’DOUL, LONG E, DREFT section in the west was rough. Thank goodness for crossings, but even then, the NONE in 24d was a long time in coming.

It certainly is different, I’ll grant it that. And I’m appreciative of the effort to produce something different. But this just did not work for me. 2.8 stars. 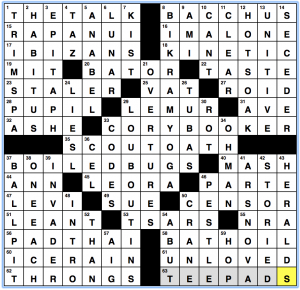 Sometimes the AVCX lands in your inbox early enough in the evening that you can see it’s a themeless from KAC and decide to give yourself the treat of doing it, untimed, on paper.

This was a really great solve. I’m not sure if I’m getting better at KAC’s themelesses, if this puzzle was easier than the regular entries he’s been producing for the New Yorker, or both, but this was breezier than I expected.  Let’s run through some fill highlights:

An ELO OVERTURE, for you.

Again, this one was a little slight in the difficulty department (especially given its 4.5/5 difficulty rating), but delightful nevertheless 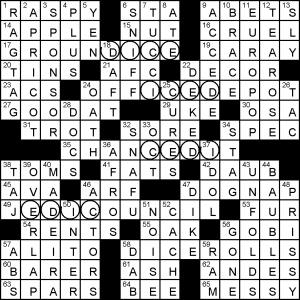 I missed the subtlety of a similar theme not too long ago. This one spells it out in the revealing clue on DICEROLLS. You move the D to the end going from DICE to ICED, move the I to the end for ICED, repeat with the C of CEDI and E of EDIC and… you’re back to DICE. DICE ROLLS.

The five-part theme has less room for BAUBLES than many C.C. offerings. I did like EUROPOP; Ace of Base had a lot of reggae influences, which is odd for a Swedish group…