This is the last Fireball puzzle before the annual summer vacation, and Peter is sending us off gently. Is this the first Fiend review written in mid-air? I’m headed home after taking Emma to New Student Orientation at San Diego State University.

The first and last Across entries amused me. I’m not sure if this qualifies as a mini-theme, but it’s certainly not an accident. 1a [Enoki alternative] is SHIITAKE and 66a [Messy slapstick trope] is SPIT TAKE. 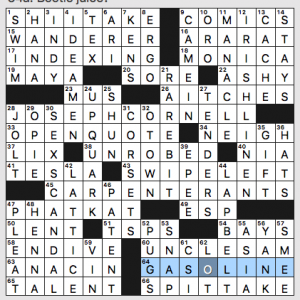 What I didn’t know before I did this puzzle: I’d never heard of JOSEPH CORNELL, a 20th century assemblage artist known for his boxes. Fascinating.

I leave you with Dion. 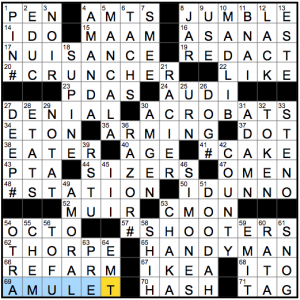 Congrats to Nate on his NYT debut! Nate is the organizer of the excellent fundraising project Queer Qrosswords (which you can still buy now!).

A nice execution of a fun idea. There’s A Lot™ of theme material (eight crossing entries plus the four revealer entries OCTO/THORPE/HASH/TAG, and the ballast fill isn’t bad considering. A few gems like MANCALA and JUMBLE and MAD LIB (hey they’re all game-related!), counterbalanced by more than the usual amount of glue (e.g., RATA in the SE is basically necessary if you want # SHOOTERS and TAG), but there’s nothing puzzle-burningly kooky, and the payoff is worth it I think.

That’s all from me. Lovely debut! Until next time!

The title suggests we’ll be taking GR out of some phrases, and that turns out to be exactly right. For consistency’s sake, all the extricated GRs were at the beginnings of their base phrases. 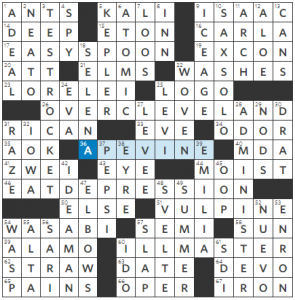 A standard drop-some-letters theme, but it mostly works. And after yesterday’s oddity, something sure and steady fits the bill nicely.

Your word of the day is 51a VULPINE meaning [Crafty]. This one wasn’t in my database (i.e. my brain), but now I see it means foxlike. Ah, that makes sense. I like it.

TEST ROCKET is good, too. ADMINISTER? Meh, not too exciting, but not bad. IDEA MAN I just saw somewhere. In the Fireball perhaps? Other highlights: KEPLER (next to ATOMIC), SVELTE, SELENA, and EMILIA [Clarke of “Game of Thrones”]. She plays Mother of Dragons Daenarys Targaryen.

But that NE corner stymied me for much too long. I neither knew CARLA Hall nor the show “The Chew”, [Record holder] is a tough clue for EX-CON, WASHES as the answer to [Light paint layers] is not obvious, and the crossings were all tough, too. A [Vault sight] is an ARCH? Ah, I was thinking bank vault, not the architectural form (as in “vaulted ceiling”). And SAX SOLO is the answer to [“Baker Street” feature]? Whoa! I’ve heard that song, but never, ever would I have guessed it was called “Baker Street.” (Maybe if I had listened to the first line of the lyrics…) Fun fact which I just came across yesterday: Madame Tussaud used to live on Baker Street. 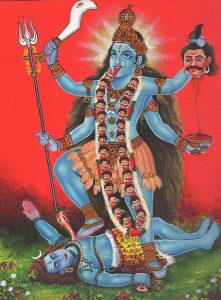 Another tough crossing: KALI [Goddess often depicted with a necklace of skulls] crossing LOOS [“This Brunette Prefers Work” autobiographer]. KALI is the Hindu goddess who is seen as the divine protector and Mother of the Universe. Anita LOOS also wrote the novel Gentlemen Prefer Blondes in 1925. Thankfully, I knew KALI from the kali.net online gaming service which dates all the way back to 1995.

In sum, I found this id to be and and oovy. Maybe it left you feeling umpy enough to ipe, but hopefully you came to ips with its mechanism and it ew on you. How’d it treat you? Did you make the ade or did your ass become ass? 3.7 stars from me.

As promised, here’s an EASY SPOON for people suffering from tremors. This video is 5 years old. Check out their website for their other cool product, the Level spoon which keeps the spoon level no matter what position the hand is in. I love this: technology solving real-life problems.

This year’s Boswords tournament is this Sunday at the Roxbury Latin School just outside Boston, MA. It’s not too late to sign up, so come join the fun! – Ben 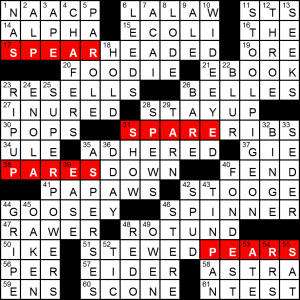 Unusual for the revealing clue of STEWEDPEARS to tip its hat to its cryptic origins. That said, STEWED is a lot vaguer anagram signal than we typically encounter. On the plus side, all three arrangements are stand-alone word parts, and not hidden across a phrase. This theme variation always feels more elegant, though not every letter set is amenable to such treatment.